Designers marched dressy coats down the runways during New York Fashion Week, and stores hope this will be a call to arms for fall shoppers 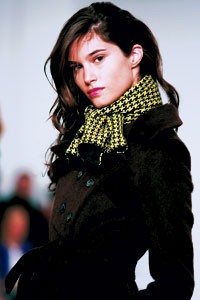 NEW YORK — Many designers marched dressy coats down their runways during New York Fashion Week, and retailers hope this will be a call to arms for fall shoppers.

Once relegated to black-tie affairs or New Year’s Eve, more formal looks like velvet, brocade or embroidered styles were well-represented. The timing is well-orchestrated, since women have been buying stylish coats to accent their wardrobes in recent seasons.

Barbara Atkin, fashion director for Holt Renfrew, the Toronto-based department store chain, said, “This is the perfect time for women to be buying these wonderful coats. Customers collect these dressy coats to wear for day and evening. This is a fantastic coat season.”

Impressed with all the brocade, velvet and tapestry coats shown under the tents, Kal Ruttenstein, senior vice president of fashion direction at Bloomingdale’s, said, “The dressier fabrics look good. It could be a whole new area next fall.”

There was also a healthy showing of shearling on the runways, he said.

“Coats look good to us,” Ruttenstein said. “I don’t think it’s a huge market, but maybe women are tired of furs and bling. They may want something to supplement their fur wardrobes.”

Robert Burke, vice president and senior fashion director at Bergdorf Goodman, said, “We’ve seen more coats on the runways than we have seen in years.

“Coats are becoming an extension of jackets, in that they are being worn as fashion pieces — not just to keep you warm.” he said. “With the embellishment and fur trim, they are being treated much more as a fashion item, as much as a full skirt or a shrug.”

As controversial as Marc Jacobs’ show was, the designer will be influential in terms of proportions, Burke said. Jacobs’ long dresses and skirts worn with cropped coats is a look that others may adopt.

First Daughter Barbara Bush wore a more modified version of the look from Peter Som to her father’s swearing-in last month. Her stylishness puzzled some inaugural viewers, who were accustomed to a more traditional look.

Som’s silk faille and gold lamé tweed coats on the runway were among the favorites of Joan Kaner, Neiman Marcus’ senior vice president and fashion director. She also singled out Tracy Reese’s “pretty” coats and Oscar de la Renta’s “beautiful” brocade ones. Charles Chang-Lima designs, which did not have a runway show but were viewed in the showroom, were another standout, Kaner said.

Though dressier coats are not about to eclipse the wool coat business, Kaner said, “People are always looking for exciting clothes for dressier occasions, especially when they come with dresses or matching pieces.”

Nicole Fischelis, fashion director and vice president for Macy’s, also gave the trend her approval. “It’s definitely a terrific season for coats. There’s a lot of novelty and new silhouettes. There are many different ways to wear the coat.”

Sari Sloane, vice president of fashion merchandising for Intermix here, said she liked the “rich-looking, beautiful” coats from Matthew Williamson and Diane von Furstenberg, and will “definitely order some for fall.”

“Those kinds of pieces are almost investment pieces, not necessarily trend pieces. Often they are something someone falls in love with, and they know they will always have these coats.”

Global warming only makes this type of outerwear more appealing. “Consumers know winter is such a short season. It doesn’t really get cold until November, and people start buying fall in August. This is something consumers can buy and wear right away.”