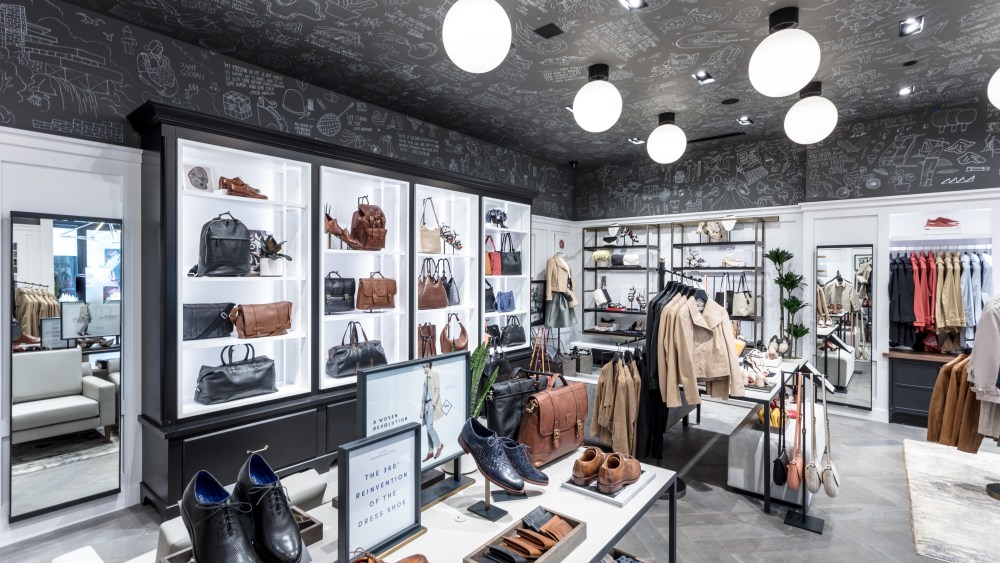 One must look up to fully appreciate the design of Cole Haan’s latest store opening in Century City.

The company on Thursday reopens at Westfield Century City. The location reflects the latest to bear Cole Haan’s new residential-inspired store design, which includes a hand-drawn ceiling mural by the artist Josh Cochran, along with herringbone wood floors, antique brass and millwork against a color palette of black, white, grey and navy.

Cole Haan Century City is now the latest to roll out with the new flagship design, which debuted on the West Coast at South Coast Plaza. It’s also at the company’s stores in NorthPark Center in Dallas, Brickell City Centre in Miami and Westfield World Trade Center in New York and is expected at the upcoming opening of the Houston Galleria.

“It’s our new optimized design and it’s just been really fun to see how the customers are reacting to it,” said chief marketing officer and general manager of business development David Maddocks, who said each store aims to be relevant to the region it’s in.

The executive went on to say that “L.A. is really important to us. It’s our second-largest market and the customer absolutely loves us there.”

The reopening comes as Westfield Century City takes the wraps off an initial phase of the center —set to see the opening of about 25 stores — that’s part of a larger $1 billion makeover.

“We believed in their vision for what they’re doing at Century City,” Maddocks said of the project. “As you know, there are plenty of malls in America that are probably considered to be extraneous and the folks at Westfield, for them to be making this kind of investment in keeping Century City as one of the premiere shopping destinations in the world, that made us want to follow with our investment in a brand new store. We really see that partnership as an important one for us and I think what they’re going to create is something remarkable.”

For More on Cole Haan in WWD:

Cole Haan to Introduce Made in Maine Collection