Combatant Gentlemen will launch footwear this week, open its first store next month and roll out made-to-order suits in July.

By Rachel Strugatz on May 3, 2016
View Slideshow 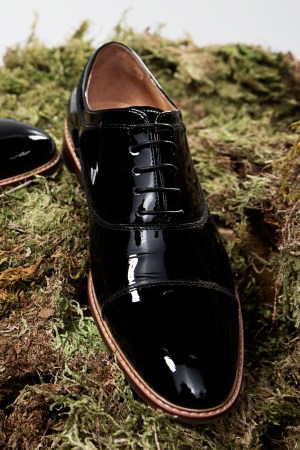 Combatant Gentlemen is expanding beyond suits and heading off-line to appeal to an increasingly savvy Millennial male.

The three-year-old vertically integrated e-tailer will launch its first collection of footwear this week, open its first store next month and roll out a made-to-order range of suits in July.

“Our shoes are one-third of the suit cost,” said Vishaal Melwani, cofounder and chief executive officer, of the new footwear collection, Toecap. The first of three footwear ranges hits combatgent.com Thursday with prices ranging from $60 to $80. Lace-up oxfords, double monk strap shoes and suede chelsea boots retail for $65, $70 and $75, respectively.

In July, the next tiers of $100 to $150 shoes will roll out both on site and at the brand’s soon-to-open, 3,200-square-foot Santa Monica store. The more-expensive shoes are produced using higher-end construction techniques and are all blake stitched and goodyear welted.

The latter details are intended to appeal to the Combatant Gentlemen customer who gravitates toward the brand’s more bespoke offerings, such as made-to-measure suits, which launched six months ago and start at $450. The early success of this program, according to Melwani, has given the company confidence in growing this area of its business with a made to order suit option starting at $325 and rolling out in July. This line gives shoppers the opportunity to customize some aspects of the suit, such as color, but not quite as much flexibility as in the made-to-measure looks.

While this summer will see the opening of the Irvine, Calif.-based brand’s first official retail store, Melwani said he’s dabbled in both pop-up and showroom-based selling concepts. The company has turned its Beverly Hills showroom, which opened in November, into its headquarters and will focus its retail efforts on a freestanding store that will bow in Santa Monica in early June.

The brand participated in a three-door, Nordstrom men’s wear pop-in series in February and March, introducing it to brick and mortar retail in Chicago, Seattle and San Francisco. Nordstrom declined to comment on sales.

Melwani credits the start-up’s success thus far to its back-end technology that uses a cloud-based platform to give real-time data from combatantgentlemen.com to its factory partners.

“We’ve been able to take a deep dive and understand the customer on such a granular level,” Melwani said. “With our supply chain and the business intel we’re getting from the consumer we’re able to make fast, educated guesses.”

He said this has helped the business scale profitably — it’s been profitable since 2014 — and not raise a lot of capital, a different path than many direct-to-consumer brands online have opted to take. Combatant Gentlemen raised just one seed round of $2.2 million in 2013 and an industry source estimates that sales could hit $30 million this year.

“We take a lot of pride in this especially because of how hard it is to build a good suit for an affordable cost. We’re OK with being known as the suit guys. We’re happy with that,” Melwani said of the site’s suits, which range from $160 to $350. Suits are still 58 percent of the business, and while the brand has branched out into bags and luggage and apparel spanning casual shirts to denim, Melwani said suits will remain the hero product.