Complex Media’s ComplexCon is upon us.

The weekend festival kicks off its fourth annual edition in Long Beach on Nov. 2 and 3 at the Long Beach Convention Center after hosting its first annual event in Chicago in July. Much like past editions, this year will see musical performances, this time with Kid Cudi, Anderson Paak and Lil Kim, panel discussions about sneakers, streetwear, media and Gen Z, and myriad brands and retailers hosting activations such as Adidas, Puma, Timex, Swarovski, Urban Outfitters and Ubiq.

Here is what to expect at the activations this year:

Billionaire Boys Club and Ice Cream teased collaboration sneakers with Reebok, rekindling their partnership from the brands’ early days in the mid-Aughts. The new styles, retail between $100 and $160 and are bright-colored reinterpretations of Reebok styles such as the BB4600 High and Low, Zig Kinetic and Answer V made for Allen Iverson.

The two streetwear brands founded by Pharrell Williams is also launching a capsule collection with Spongebob Squarepants. T-shirts, skate decks, pins and storage crates from the collection are inspired by the episode ‘Goons on the Moon’ where the characters travel to the moon.

“SpongeBob is a pop culture icon, and we are thrilled to offer this collaboration to fans new and old” said Williams.

Coca-Cola, Polaroid and customization are in the spotlight at the Champion booth. The sportswear brand is showing two collections with Coca-Cola that will launch later this year at Champion and Foot Locker and a California Tribute Exclusive Collection with Polaroid, featuring the work of photographers Silas Lee, Izzy Balderas and Jacob Fischer. Champion also produced special ComplexCon patches for attendees to design the brand’s T-shirts, and is unveiling new slippers inspired by its fleece and hoodies.

Daniel Patrick partnered with Adidas to design the Harden 4.0 sneakers for 2018 NBA MVP and Houston Rockets star James Harden. The designer and the sportswear company will officially unveil two exclusive neon colorways of the basketball sneaker and a geographically inspired capsule collection comprised of a hoodie and shorts. The apparel pieces sport neon green accents that match the new sneakers Harden will be wearing, beginning Nov. 1.

Fossil is looking to its archive once again, launching its latest style from its popular selling Archival Series, the Mood Watch, at the show and again on November 4.. The watch comes in a black-on-black 42mm steel plated case and 32mm rose gold-tone case, both with a color changing dial and mood decoder. The Mood Watch is individually numbered and retails for $115.

Fubu is showing a collaboration with Black Lives Matter as part of the human rights movement’s #WhatMatters2020 campaign to engage customers for the 2020 election. The BLM x Fubu collection includes T-shirts and hoodies ranging in price from $40 to $60 and will be housed in an activation space with a mock voting registration booth, which is right on time for Election Day on November 5.

Takashi Murakami is following up his Chicago Cubs-themed collaboration with Mitchell & Ness that debuted at ComplexCon in Chicago in July with a Los Angeles Lakers apparel capsule. Murakami put his spin on the NBA franchise’s logos on jerseys and matching shorts, hoodies, sweatshirts and T-shirts ranging in price from $65 to $250.

Ntwrk partnered with Def Jam Recordings on a multi-brand partnership that includes Puma and Kith. The content and commerce platform is presenting vintage T-shirts, an apparel capsule by Puma and Def Jam artists Public Enemy, and Kith’s Def Jam varsity jacket and capsule collection that both showed at the retailer’s Kith Air show in September.

Onitsuka Tiger debuted numerous collaborations this year with Cinoh, Christian Dada, Givenchy and even Street Fighter. The latter has collaborated with the Japanese company again on a new colorway of the Mexico 66 sneaker. The first pair inspired by Street Fighter character Chun-Li launched this summer in a white, blue and gold colorway, and the new pair launching for ComplexCon is white, red and gold and comes with augmented reality art on the show box that animates using the EyeJack app, and a code to input in Street Fighter V: Arcade Edition to change Chun-Li’s costume to Onitsuka Tiger apparel.

The new pair retails for $170 and will also launch at The Webster in New York City and Miami. 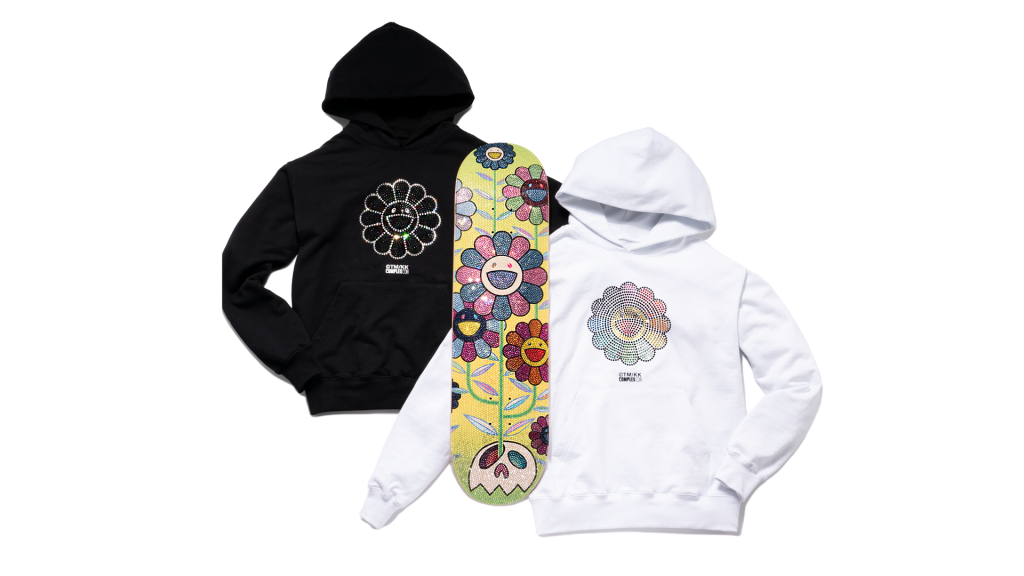 Artist Takashi Murakami created a three-piece capsule collection with Swarovski crystals. The artist produced two hooded sweatshirts made with nearly 1,000 crystals, and a skate deck with more than 13,000 crystals in 22 different colors. While the hoodies retail for $450, the skate deck is available for $5,000.

“ComplexCon is always looking for special products and unique collaborations in our ComplexCon Gift Shop. We’re very fortunate to work with the legendary artist Takashi Murakami and incorporate his iconic work, so when the opportunity with Swarovski came up — I knew there was something really special we could create together,” said ComplexCon’s event director Neil Wright.

Timex has a number of collaborations launching at ComplexCon, including Alpha Industries, Greats, Raised by Wolves, The Good Company and Pac-Man. The collabs with Greats and the Good Company are continuations of ongoing partnerships, Alpha revived a past Timex style that honors both brands’ histories, and Raised by Wolves added wolves to its collaboration that utilizes Timex’s Indiglo backlight. The final partnership with Pac-Man is a commemorative T80 watch style that honors the gaming franchise’s long history that dates back to 1980. The watch brand is also hosting a retro-themed arcade where attendees can play for a chance to win the T80 watch and other prizes.

Adidas has yet another collaboration at ComplexCon but this time with Ubiq. The East Coast retailer partnered with Adidas Consortium to debut the Crazy BYW x 2.0 basketball sneaker inspired by Ubiq’s stores in Philadelphia and Georgetown, D.C., and their Sister Cities of Incheon and Seoul in South Korea. The concept first created in 1947 after WWII is represented by reflective 3M materials, Korean typography on the sneaker tongue and interior and a sock liner with a color split.

The Lee Jeans x Alife collaboration is taking over the Urban Outfitters booth at ComplexCon. The new drop is a continuation of the brands’ partnership, and is comprised of a pinstripe jacket and matching 5-pocket pants, a hoodie and branded T-shirts, and Buddy Lee T-shirt. Attendees can also customize pieces at the booth with custom accents.

California shop Chinatown Market is releasing its exclusive take on Puma’s newly rereleased Rider sneaker, a style that first launched 40 years ago in order to meet demand from joggers, a newer market at the time.