Alice + Olivia was open for business.

Greenwich Avenue in Greenwich, Conn., wasn’t exactly the robust shopping experience one might have hoped for Thursday, a day after stores in the state got the green-light to open.

At around lunchtime on Thursday, a walk down Greenwich Avenue was pretty peaceful, with most of the action taking place at the outdoor dining areas of restaurants and coffee shops, and people walking dogs and crossing the avenue haphazardly. 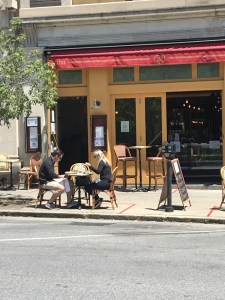 Saks Fifth Avenue, which has four specialty stores on and off Greenwich Avenue for jewelry, contemporary, designer/beauty and footwear, was open for business, but traffic was negligible. The stores looked spanking clean, and employees were masked and ready to be of assistance.

“Are you looking for something special?” asked a saleswoman as one entered the contemporary boutique. After informing her I was just looking around, she told me to check out upstairs, which was also practically empty, except for perhaps one or two customers, and there were sales offering 25 to 40 percent off. The designer boutique across the street had a sign in the window welcoming customers back, and inside were some signs saying sales up to 50 percent on designer apparel. One customer was spotted crossing the middle of the street with two giant Saks Fifth Avenue shopping bags. Score.

A saleswoman at the Saks footwear store around the corner said that the shop opened Wednesday, and there had been some shoppers. A few were looking at footwear Thursday. The Saks Fifth Avenue footwear store had a big Purell dispenser at the entrance. 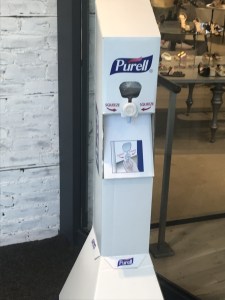 As one sales associate at another specialty store said, “People are still scared to come out.” She said she was working with people by appointment, and said there were no customers so far today, as of 1 p.m.

Many of the stores on Greenwich Avenue were closed, including Club Monaco, Joie, J. Crew, Athleta, Zara, Brooks Bros., Vince, Rag & Bone, Tory  Burch, Vineyard Vines, Sephora, Warby Parker and Stuart Weitzman. The most action was at the restaurants and coffee shops, with people enjoying the beautiful spring day and dining al fresco. Starbucks had two employees outside taking orders at a small table. 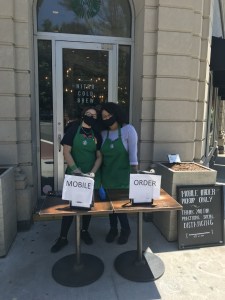 While Aritzia was boarded up, Shari’s Place had a sign saying “Closing This Location. Everything Must Go,” and was open but empty. Roller Rabbit was open, as was Out of the Box and Richard’s. At Richard’s, a sign on the front door told customers to go around the back to the parking lot to enter, and a quick peak inside showed a pretty empty store with three salespeople chatting over a display, not exactly practicing social distancing. 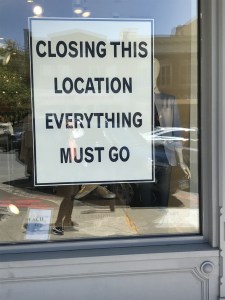 Apple was also still closed, as were hair salons, which aren’t allowed to open until June 1.

A new Veronica Beard store had a sign telling future customers, “Coming Soon,” and Frame said it would be opening June 1. Intermix was temporarily closed and Alice and Olivia and Great Stuff were open, but had no customers at around 1 p.m.

“We did well yesterday and had a couple of good customers, but today was very quiet,” said Lori Friedman, owner of Great Stuff, which has six specialty stores in New York and Connecticut. Two have opened in Westport and Greenwich, Ct. “It’s going to be hit or miss. It’s not going to be easy. We don’t know what’s the right thing, and we’re putting one foot in front of the other.” For now, she’s selling spring at full-price, and she’ll be happy if the season is a wash, and they can be ready for normal circumstances. in the fall.

She said they disinfected the store and the shelves and sanitized everything. “I think the world is spooked, it’s going to take a while until they come out with a vaccine and people get tested and feel safe. Also where are they going? The theater is closed and restaurants are closed,” she said.