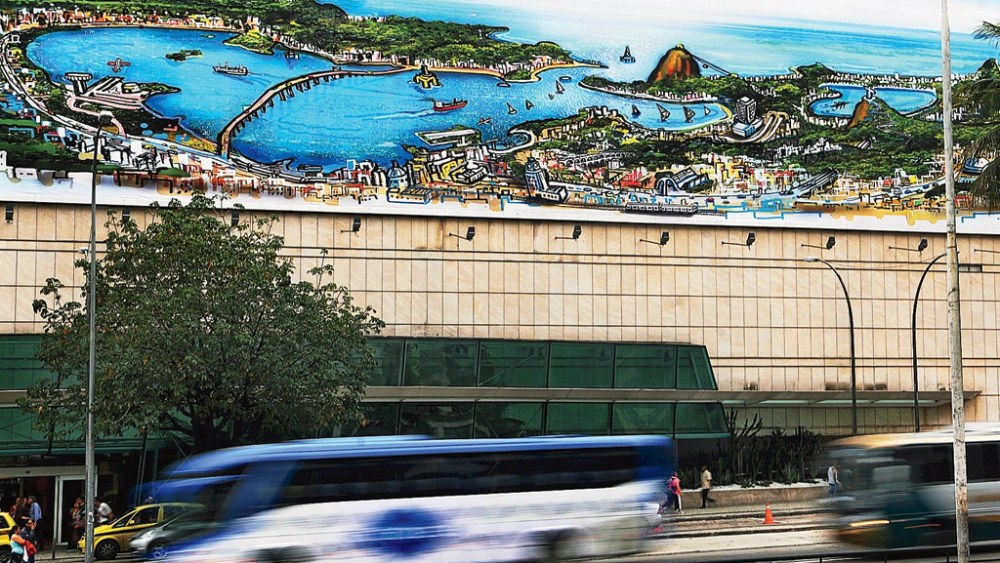 There is no starker reminder that Brazil is a developing country than the drive into Rio de Janeiro on the Linha Amarela and Linha Vermelha highways. I made that drive in a 20-seat van that was packed with 21 people. The 21st person was a 2-year-old girl who was stumbling freely in the space between the seats and the door as the van navigated traffic at top speeds—not a customary sight in the United States, but not unexpected here.

But it was the sight outside the window that really floored me. Shortly before the van entered a tunnel on the outskirts of Rio, the landscape was filled with multilevel houses made of brick, occasionally broken up by fields where boys were playing soccer and flying kites. The walls were graffitied, and trash littered everywhere.

Exiting the tunnel, I entered a vastly different world. Glistening skyscrapers, gorgeous beaches, lofty palm trees and modern storefronts all came into view. The city, at least from a distance, could have easily been compared to major cities in the U.S. or Europe. The ride crystallized just how far Rio had come and just how far it has to go.

It was through that bifurcated lens that my trip to Rio de Janeiro came into focus. I was in Rio for a wedding, part of a large contingent from California. Not everyone was comfortable roaming the streets of the city, but it was with little fear that I decided to check out Rio Sul. (I must add, though, that crime, or the perception of it, must persist because guards stood in front of stores at Rio Sul.)

Built in 1980, Rio Sul is Rio de Janeiro’s first major mall. With 529,000 square feet, it has 400 stores and reports 22 million visitors annually. When I talked to the woman at the front desk of my hotel, she told me that Rio Sul was the city’s moderately-priced mall option, while São Conrado Fashion Mall was its priciest. I figured I’d go where the regular people shop.

A tip for fellow English-only speakers venturing to Brazil: Learn some basic Portuguese phrases and how to pronounce them. No one will understand Portuguese words pronounced as English words. (Rio de Janeiro is actually pronounced something like Hee-oh dae Janeiro with a soft J sound that my cumbersome tongue can’t manage. To my untrained—and, admittedly, tin—ear, Portuguese is an ongoing stream of J and G sounds.) Unfortunately, I didn’t take my own advice, and taxi rides were always an adventure. I took about two taxis a day during my trip and didn’t encounter one driver who spoke English.

Rio Sul runs free buses back and forth to various hotels in Rio. Mine wasn’t one of them, so I jumped in a taxi for the 15-minute ride. When I got to the shopping center, I wasn’t sure I was at the right place. It looked like a gargantuan convention center. Rio Sul is no breezy, Disneyland-esque outdoor lifestyle center. It’s for serious shopping.

Two women at the information booth near the entrance spoke English perfectly. I asked where I could buy cosmetics and was directed to the third and fourth floors. Then, I noticed a drugstore to my left called Drogasmil with prominent signage screaming Beleza. Even with my nonexistent Portuguese, I understood that meant beauty.

Drugstores are ubiquitous here, and the competition seems fierce. Wandering around Ipanema, I saw several Pacheco and Drogasmil locations, often right across the street from each other or on the same block. Drogarias DPSP, the third-largest drugstore company, owns Pacheco, and RaiaDrogasil, the second-largest, owns Drogasmil. Maybe the competition brings out the best in Brazilian drugstores because the Drogasmil at Rio Sul was pretty damn nice.

Two men standing at the front handed out shopping baskets. I grabbed one and walked around. Covering a wall on the side of the store were brightly lit skin-care shelves. I recognized the brands: Neutrogena, Nivea, Vichy Laboratoires, Olay and RoC. Dermocosméticos, as they are called, aren’t cheap. An Olay Regenerist facial serum cost nearly R$70 or about $35. In Los Angeles, the same serum sells for $19 to $22.

Hair care was prominent. Again, I recognized most of the brands: Pantene, Dove, Finesse and TRESemmé, Wella. In hair care, unlike skin care, there was a smattering of Brazilian brands, including Niely, Seda, Vizcaya and éh.

I bought some razors for my boyfriend, and headed out to explore the mall. I saw very few retailers from the U.S. Among the ones familiar to me were Starbucks, Crocs, Levi’s, Zara, Nike and Swatch. In beauty, there were L’Occitane, MAC and Clinique outposts.

There was a crazy amount of shoppers. Along with the unfamiliar stores, the manner of shopping was a bit foreign. Judging from the people, Brazilians prefer shopping in groups. Even though it was a workday, whole families were on parade. Strollers were common, as were dads and brothers. Rio Sul’s retail lineup had stores and services for the entire family. There were travel agencies, electronics outlets, a framing store and incredibly crowded eateries.

I’d read that department stores don’t have the presence in Brazil that they do in the U.S., so I was surprised to find that Rio Sul had six anchors. I walked into two: the department store Renner and the big box–like retailer Lojas Americanas. Renner’s front window was filled with a Clarins display. Inside, the beauty section was decidedly perfume-centric. There was a long fragrance counter with four female employees clad in black ready to inform customers about Carolina Herrera, Paco Rabanne, Hugo Boss, Dior, Kenzo, Givenchy and many, many more.

At Lojas Americanas, hair care was the leading beauty category, particularly hair color. There was also a smattering of makeup from L’Oréal and Maybelline, and a sizable collection of nail color from mainly local brands.

Next, I ventured to the third floor, hitting Dermage first, which has around 40 stores in Brazil and plans to expand to more than 100. I asked a woman at the entrance, who wore a uniform similar to Clinique’s white coats, to tell me about the products. She stared at me as if I were an alien. Quickly, another woman came over and greeted me in English. Same question, another stare. She grabbed a third woman, who explained that Dermage has a wide range of products from skin and hair care to makeup. She pointed to bestsellers, notably an antiaging product called Improve C 20, costing about $72.

I asked about SPF creams and hair care to use during my stay in Brazil. There were plenty of choices and I bought a shampoo and conditioner labeled “Revitrat Force” that I was told would restore my hair, and an SPF gel crème named Photoage OC. Throw in a body wash and a mask supercharged with argan oil, and I spent around $130.

As I headed out, I wondered what Rio Sul will be like after the World Cup and the Olympics. Will local stores remain? Or will global chains take over? I felt a sense of premature nostalgia wash over me. Progress in the developing world so often means developing into the same old thing. That could be what Brazilian consumers, who are growing richer as their country’s economy grows, want. And, if they don’t, it still may be what they are getting.