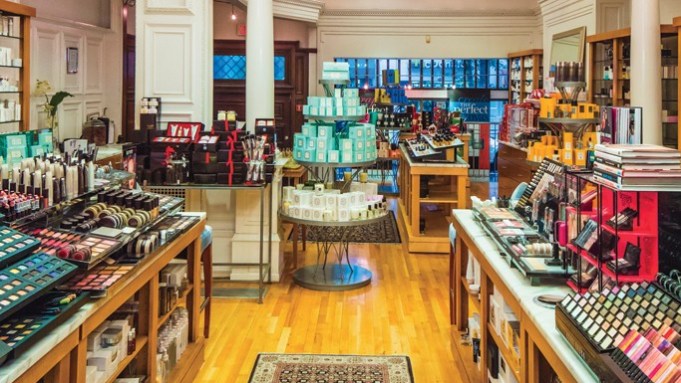 I lived, worked and shopped in New York City for more than a decade before giving in to the pull of the outlying suburbs. Now, between my New Jersey-to-New York commute and being the mother of a one-year-old, I rarely have time to dash into a beauty boutique, let alone sit down for a makeover.

And forget about going to a department store. In midtown, that means hanging around the counter waiting for an available beauty adviser, and in the suburbs it requires finding a parking spot and traipsing through rows and rows of clothes in search of the beauty department. I simply don’t have the time. So, during a recent weekend trip to Philadelphia, I decided to treat myself to an afternoon of beauty shopping.

After all, Sephora, Macy’s, L’Occitane, Kiehl’s, The Art of Shaving, MAC Cosmetics and Bluemercury were all located within walking distance of where my family and I were staying in Rittenhouse Square. Having grown up 40 minutes north of Philadelphia, I’m well acquainted with the city. My sister and her family live just a few blocks from Walnut Street—some of the best shopping to be had—and my father works on Market Street.

Today, I whittled down my store list to Bluemercury, where I’ve shopped countless times before, and MAC, because I needed to refresh my makeup. Before setting off alone, I grabbed a quick bite at Di Bruno Bros. market with my son and my husband, who remarked, “People here dress really well.”

It’s true. It seemed as if passersby were dressed to be seen or outfitted in expensive-looking workout gear. On this fall day, Rittenhouse Square Park, which is bordered by stores like Anthropologie and Barneys Co-Op, was bustling. The city is home to a number of universities, and the streets are teeming with style-conscious young people. One young woman carrying a Barbour bag on her arm, stopped to admire my son’s quilted navy jacket. “Is that Barbour?” she asked as she proceeded—I kid you not—to inspect the tag. No, in fact the hand-me-down coat was Ralph Lauren. Tourists also abound, as the city is home to landmarks such as the Liberty Bell and Independence Hall.

As I headed to Bluemercury, I resisted the temptation to duck into a high-end children’s boutique across the street. My disposable income usually gets funneled to baby clothes and toys, but not today.

At Bluemercury, I was greeted warmly by a sales associate. I told her I was looking for a skin care regimen that would brighten my skin and make it looks less, um, tired. She immediately directed me to a visiting Laura Mercier makeup consultant, declaring, “Laura Mercier just reformulated its entire skin care line. It’s beautiful.” I normally don’t buy skin care products from cosmetics brands, gravitating instead toward brands like Dermalogica and Shiseido. But I do faithfully wear Laura Mercier Silk Crème Foundation and Illuminating Tinted Moisturizer, so I thought I’d give the skin care products a look. The consultant told me that I should avoid anything that will whiten the skin—it’s true I’m already white enough (I prefer the word ‘fair’).

What I needed, she said, was something moisturizing, with vitamin C. She applied Flawless Skin Repair Serum on my hand. “Yes, this is what you need.” Feeling slightly rushed and wishing to prolong our conversation, I asked, “What about for the eye area?” She then applied Flawless Skin Repair Eye Serum to my hand. I asked if she wouldn’t mind applying it to the eye area, which she then did, patting it gently into my skin. “Does it help with puffiness?” I asked. “It does everything,” she said.

Trying to extend our interaction, I then asked about a facial scrub. She grabbed a tube of Flawless Skin Face Polish and applied it to my hand as well. I couldn’t help but wonder what the other brands in the store had to offer in the brightening area, so I politely excused myself to browse on my own. I soon found myself in more familiar territory: the Dermalogica display.

But with the Laura Mercier consultant close by, I resolved to try something new. I told her I’d take the eye serum, as it’s the area where I need the most help and asked the price. It was $80. I also asked for a sample of the face serum. As I walked to the register, I shared with the Bluemercury sales person who had initially greeted me how the cold weather had caught my skin off guard. She said cooler temps require us to rethink skin and hair care, throwing some samples of Oribe shampoo and conditioner into my bag. I walked out thinking the final price was higher than I expected, but I had another store to get to so I brushed the concern aside. Two days later, when I finally dug the product out of my suitcase I saw that the consultant had given me the face serum for $95 and not the eye product. An honest mistake since the two bottles look similar, but now I need to find time to visit a store in New Jersey to return it.

Heading to MAC, I glanced in the windows at Burberry, American Apparel, BCBG and Cole Haan, and noticed a “coming soon” sign for Club Monaco. At MAC, makeovers were in progress at each chair and in many cases friends gathered around to watch. It felt like a party. The last time I sat for a makeover at a MAC store, I left looking like a long-lost Kardashian sister. I don’t say that in a disparaging way. It’s more to illustrate the transformative power of makeup, although that wasn’t quite the transformation I was going for.

Despite the whirl of activity, I only waited for five or 10 minutes before a consultant was available. I told her I was in search of a very pigmented, bright lip look that was modern and appropriate for fall. The consultant pointed me to the lipsticks and explained the different finishes. She steered me toward the long-wearing lipsticks, as the pigment is more intense, she explained. She must have tested 15 shades on her hand and was very patient as I said, ‘no’ to each. She then offered that she doesn’t choose lip color by season, but by mood. Her skin was fair in tone as well, so she suggested I could wear a wide range of colors. She tried two shades on my lips, using liner for each. The first was a striking raspberry hue, but not quite what I had in mind. The second was a bold red. I vacillated between the two, and sensing my doubt she suggested I bring in a photo of the look I wanted. In the end, I chose the red—Pro Longwear Lipcreme in Perpetual Flame—and asked her to help me select a complementing blush shade. Pinch O’ Peach was a favorite, she said, applying it to the apple of my cheeks and brushing it along my cheek line. “Don’t brush down, or you can look gaunt,” she cautioned. To complete the look, I asked for an eyeliner with staying power on the lower and upper lid. She immediately directed me to a black liquid liner called Penultimate Eye Liner and then demonstrated the application process by using hand motions. “Pull you eyelid to the side, press and apply. And if you want it to wing out a bit, decide where you want the wing to begin, start from that point and pull the pen in. Don’t even bother to apply it to the lower lashes,” she said.

A truthful answer, and I was sold. The three products totaled $61.02—not bad for a new look. Before handing me my products, she offered a final tip: When placing the cap back onto the Longwear lipstick tube, make sure you hear a click. That will keep the air out and prevent the formula from dying out. She also put in a plug for the MAC recycling program—return six product containers and receive a free MAC lipstick. I left feeling part of a club, emboldened by my bright red pout.