European home appliance manufacturer Bosch did research on how Brits are lessening their load on the environment — surveying the laundry habits of 2,000 British consumers.

The term “outfit repeater” has taken on positive connotations in the fashion world as sustainable values — like re-wearing clothes — seem to placate consumer guilt. It’s been found not just on the red carpets (with actress and comedian Tiffany Haddish being one spokesperson for the joys of reuse, having worn her $4,000 Alexander McQueen dress a record of five times), but in the lives of regular citizens.

Revealing more insight into the underlying (and often gendered) perceptions for washing, the survey breaks down some noted differences in men and women. The survey found men are more likely to be self-conscious about themselves but rarely view others negatively.

Male survey respondents were likely to wear socks two times on average before washing, whereas women opted for a clean pair every day. But on a more personal note, the average bra is only washed after eight wears, as the survey found.

Breaking down the closet even further, the survey found on average, T-shirts are considered dirty after two wears while trousers, sweaters and jeans are considered “dirty” after the fourth wear.

Just 27 percent of Brits “often consider” the environment when doing their laundry, with one of the shortcomings being opting to wash without a full load. Similar to companies such as Terracycle-owned Loop offering customers the option to set their own shipping thresholds to reduce impact, more consumers are considering the impact of their wash.

“I also wash my clothes on a low heat cycle, steam instead of iron to protect them and ensure that they last longer,” Charlotte Moore, a sustainable fashion influencer and partner to Bosch, said in a statement. Echoing Moore, fashion influencer Lottie Woods said, “as a self-proclaimed outfit repeater, wearing your clothes more often and washing them only when needed is much better for the environment and helps to increase the life span of your clothes.”

The purpose of the survey, as a Bosch spokesperson said, is “it seems that if we can all make a conscious effort to reduce the amount of relatively fresh items creeping their way into the wash bin, everyone can limit their washing impact in some way.” For good measure, there’s “no perfect answer” for how often clothes should be washed. 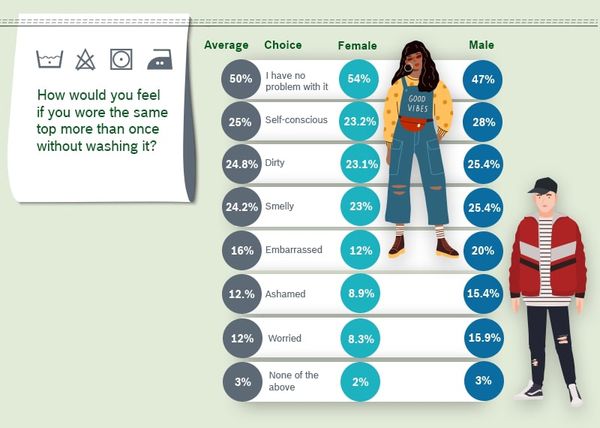 The Beauty Battleground Is Still Mired in Plastic, Faulty Claims

Consumers Willing to Pay a Premium for Sustainable Businesses