Shoppers may also pull back on spending in the first quarter after suffering from an online "shopping hangover" this past holiday shopping season.

By Arthur Zaczkiewicz on January 9, 2020

After record-breaking fourth-quarter online sales, consumers may be suffering from a “shopping hangover” and could pull back on spending in the current quarter, according to retail industry consultants and solution providers, who also see media headlines touting the possibility of a full-blown war with Iran and a looming recession as impacting the psyche of shoppers.

Analysts and consultants also see changing spending habits impacting retail sales again this year. For example, a shift in spending from product categories such as apparel and luxury goods to emerging new technologies is expected to accelerate, they said.

Still, the new year has brought some a post-holiday gift to many U.S. consumers: minimum wage gains. And while it will take time to see if the increases have a positive impact on household debt, spending and savings, consumer experts see opportunities in the current market as well as headwinds.

Keith Anderson, senior vice president of strategy and insights at Profitero, said while the latest Consumer Confidence index is tepid, “it is not markedly down, and minimum wage increases are driving wage growth alongside peak employment and relatively stable retail sales, most of which are being driven online.”

“While there may be some headwinds, there is still clearly a growth opportunity for brands that meet shoppers where they’re migrating — online,” Anderson said.

[See related story: Nike, Lululemon and TJX Cos. Seen as Top Investments for 2020]

Vic Drabicky, founder and chief executive officer of January Digital, a consultancy with clients that include DKNY, Fenty Beauty, Vineyard Vines, Max Mara and others, said the “single biggest” headwind this year is uncertainty.

“If you have fears about a war, about a recession, about political unrest, tariffs and everything else going on, it’s very difficult to plan your finances, so the tendency is to play it safe,” Drabicky told WWD. “But when consumers play it safe, they inherently insert more uncertainty [financial] into the system. Then consumers become more conservative and things can go from bad to worse in a hurry.”

Drabicky said this ends up putting brands in “a rough spot as they are in the same spot as consumers — playing it safe because the future is too uncertain. If both brand and consumers choose to play it safe at the same time, then we get in a pretty rough situation.”

But Nguyen said consumer confidence could soar later this year “due to easing trade tensions and de-escalation of geopolitical conflicts.” He noted that “it’s not likely that the rising tide would lift all boats.” Nguyen said. In 2019, “two-thirds of all consumer spending went toward services such as housing and health-care costs, leaving less capacity for discretionary spending on non-essential goods and services. Retailers are finding themselves in an increasingly competitive zero-sum game.”

For this year, Nguyen told WWD that “the squeeze will be especially noticeable in luxury goods sectors, as a significant portion of household discretionary spending will be dedicated to emerging tech, such as connected home and 5G hardware. In particular, the continued proliferation of personalized shopping and secondary online markets will exacerbate pressure on luxury fashion.”

Indeed, those technologies were on full display at this week’s Consumer Electronics Show in Las Vegas. Nguyen finds fuel for optimism in the fact that many households have healthy 401(k)s, and a bit more savings in the bank. He said it is possible “consumer spending will remain steady in 2020. In today’s asymmetric economy and volatile market, steady is as good as one can hope.”

And while consumer spending showed gains this most recent quarter, there are several macro- and “industry-specific headwinds” that could impact fashion and retail, noted Kathy Gramling, the Americas consumer industry markets leader at EY.

“At the macro level, geopolitical tensions, a changing political landscape, an unpredictable economic environment and impacts of global markets, such as Brexit, could affect consumer demand and, ultimately, profitability,” Gramling said. “But industry-led headwinds, primarily driven by consumer expectations, could not only impact how much consumers spend, but also where and how they spend.” 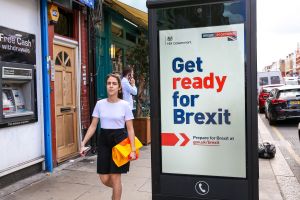 A Get Ready for Brexit ad on a telephone box in North London this past fall.  Dinendra Haria/LNP/Shutterstock

Gramling said shoppers are spending on convenience, and said Black Friday and Cyber Monday sales this past season rose 19 percent year-over-year — driven by online deals. “But, Black Friday brick-and-mortar sales were down, pointing to the continued shift to online,” Gramling explained. “While e-commerce only accounts for only 16 percent of retail today, UBS predicts that with each 1 percent rise in online penetration, 8,000 to 8,500 stores will be forced to close, totaling some estimated 75,000 store closures by 2026.”

In response, she said companies must “create an ecosystem that not only includes physical and digital channels, but also drives a compelling experience to capture consumer dollars in 2020.” Gramling noted that consumers spend on choice. “To meet this need, manufacturers are ramping up direct-to-consumer selling and companies with nontraditional models, like monthly clothing rental services, are disrupting the market, providing consumers with more and more options to spend their dollars,” she said.

Other “macro” issues include concerns from a geopolitical perspective, as Nguyen pointed out, but also environmental concerns — notably the impact of climate change. Bridget Fahrland, head of digital strategy at Astound Commerce, said as fires rage in Australia, “climate crisis seems more real and more relatable than ever.”

“People are starting to wake up to the fact that they must make changes in their daily lives to prevent a total global crisis,” Fahrland said. “A brand’s climate practices will become a yardstick average for consumers, and no longer just a consideration of the affluent conservation crowd.”

Fahrland said she expects brands to take greater leadership this year on reducing their carbon footprint. “And also, expect e-commerce shipping practices and packaging to come under greater scrutiny.”

“Next day may become less of a desire for consumers, and companies that can offer more sustainable distribution practices — such as Zume — may find a nice niche over the next five years,” Fahrland said. “Maybe climate change will unleash the backlash against Amazon that brands have been hoping for.”

Fahrland’s colleague, Andrew Sirotnik, chief experience officer at Astound Commerce, suggested that the “heaviest weight on the shoulders of consumer-citizens is a pervasive sense of powerlessness.”

“Sure, there are many concerning things happening in the world, but hasn’t that always been the case?” Sirotnik said. “I think the real culprit is that we feel, at a national level, that nobody truly listens or cares, and there’s not much we can really do about it. And I believe this to be true across the board, red or blue, young or old, each with their own versions of this story.”

And this is where retail can help, he said. “Retail is the opposite — it’s basically an oasis from the rest of the world,” Sirotnik explained. “Modern brands celebrate consumers in every way and go to great lengths to show that they know us. We feel valued, important and influential, with everyone competing for our approval. And where we choose to spend is our ultimate power.”

If offering greater customer experiences is a “shelter from the storm,” as Sirotnik noted, then that means many retailers need to up their game — online and in stores. That includes forging stronger relationships with consumers — especially online as physical store traffic declines.

Eric Smuda, principal of CX Strategy and Implementation at InMoment, said from his perspective, a “headwind to consumer spending is retailers’ own inability to adapt to consumers’ online and mobile needs.”

“Recently, consumers have become less excited about spending at brick-and-mortar stores — especially in regards to fast fashion retail,” Smuda said. “For years, well-established retailers have relied on a nearly formulaic model to craft their shopper experience. We’ve already seen, and will continue to see, a decline in retail earnings and an increase in bankruptcy filings from some of the largest brands in the fashion industry.”

He said retail chains that have “lost touch with their customers and failed to evolve, such as Forever 21, Payless, American Apparel and Gap — who were major players in the 2000s and early 2010s — are either struggling or nonexistent.”

“Consumers are tired of the familiar, generic, repetitive experiences they have come to expect in stagnant brick-and-mortar stores,” Smuda said. “Though retail is still seeing overall growth year-over-year, the brands who are winning are the ones able to provide consumers with the innovations they desire, namely a cohesive in-store, online omnichannel experience.”

Smuda said the retailers and brands that will succeed “are the ones who ask consumers what they want, regularly evaluate the way they do business and apply suggested changes to create positive experiences for their customers. Those who fail to adapt will lose out on their fair share of consumer dollars.”