Tokyo's is the latest fashion week to fall victim to the outbreak.

TOKYO — Even as the focus remains on its neighbors, China and South Korea, Japan’s fashion and retail industries continue to feel the effects of the COVID-19 outbreak.

On Monday, organizers of Tokyo Fashion Week announced that the fall season of Japan’s largest fashion event had been canceled. It was scheduled to run for six days, from March 16 to 21. The announcement comes after several individual brands, including Hyke and Vivienne Tam, had already called off their Tokyo shows.

“As apprehensions due to the coronavirus [COVID-19] outbreak rise daily, our primary and utmost concern always being the safety and security of all parties involved, after heavy discussions with related parties, we have come to the painful decision of there being no other choice than to give up Rakuten Fashion Week Tokyo [fall] 2020,” said a statement posted to the organization’s web site.

Organizers said they would continue to work closely with the brands that had planned to participate in Tokyo’s fashion week, in order to help them gain business opportunities and promote their collections.

Tokyo was the latest casualty among the Asian fashion weeks, as both Seoul and Shanghai previously called off or postponed their events. As of Monday, Japan’s largest fashion trade show, Fashion World Tokyo, is still expected to go forward. It is scheduled for April 1 through 3. Organizers announced on Feb. 21 that they would take special precautions to prevent the spread of the illness, such as providing alcohol-based hand sanitizer and checking visitors’ body temperatures at the entrance. Those with a temperature of over 99.5 degrees Fahrenheit will be asked to fill out a medical questionnaire and submit to questioning by a doctor or nurse before possibly being allowed entry.

A nationwide school closure that began Monday has also affected business in Japan, as many working parents have been forced to work from home. Shiseido announced on Feb. 26 that some 8,000 employees in the country would telecommute until at least March 6. That figure excludes factory workers and sales staff at store counters, who have been given the option to work on flexible schedules in order to take care of their children. Staff who have no other option have been allowed to take up to an additional 10 days of paid leave between Monday and April 10. 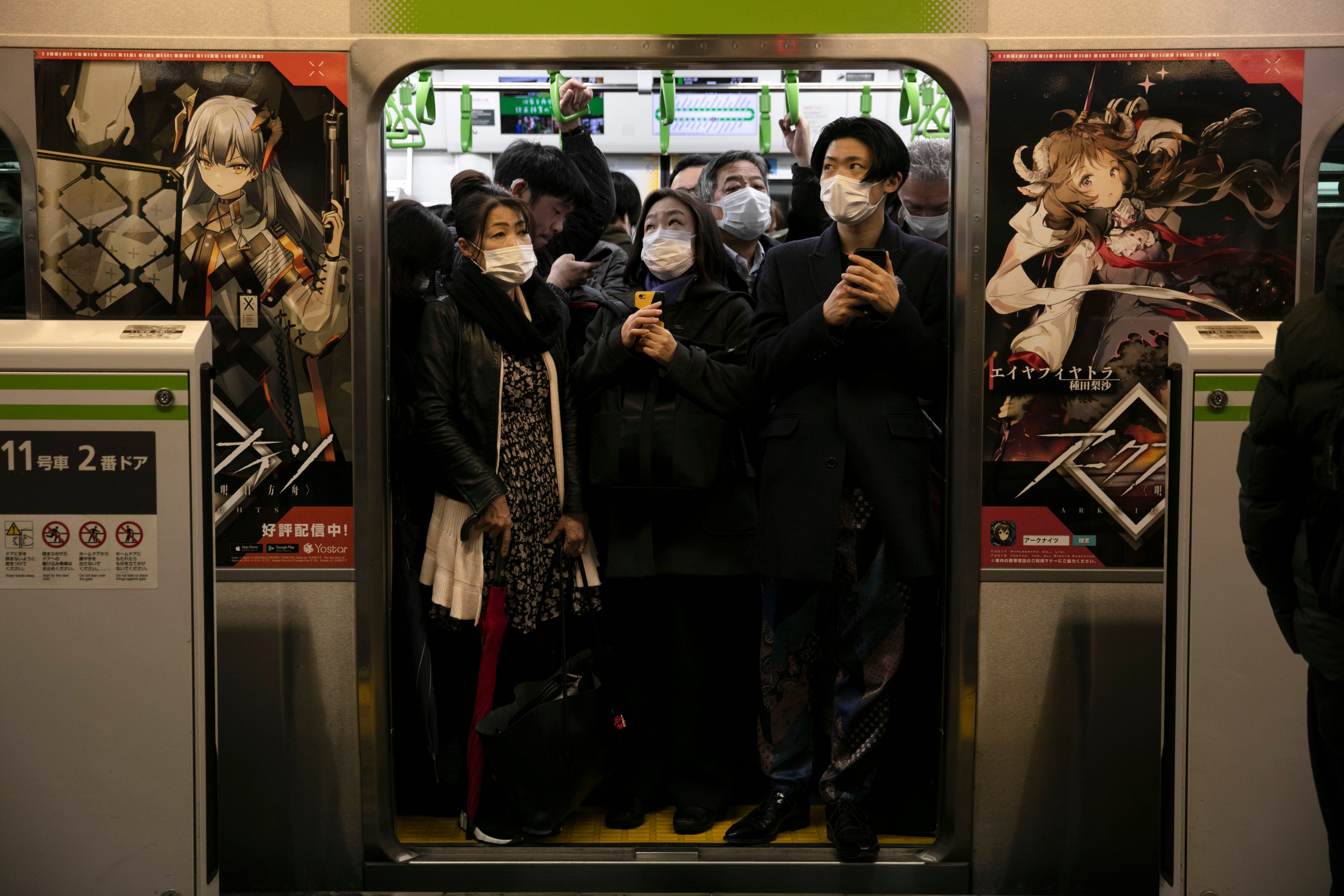 Commuters wearing masks stand in a packed train at the Shinagawa Station in Tokyo. Coronavirus has spread to more than 60 countries, and more than 3,000 people have died from the COVID-19 illness it causes.  Jae C Hong/AP/Shutterstock

Kao is taking similar measures, asking some 15,000 local staff, other than factory workers and beauty consultants, to work from home starting last Friday and continuing until March 15. The company has also prohibited all domestic and overseas business trips.

Uniqlo parent company Fast Retailing said the number of stores that remain closed in China is now at 90, down from a peak of 370.

“Our decision to reopen stores has been taken in compliance with local government regulations and aligned with the reopening of shopping malls,” a spokesman for the company said.

In Japan, about 80 Uniqlo stores are operating at slightly shorter business hours. The reductions range from 30 minutes to two hours, depending on the store’s location. The spokesman said the company expects this to continue for about two weeks. Employees at Fast Retailing’s Tokyo headquarters have the option to telecommute until at least the end of March.

Isetan Mitsukoshi Holdings, Japan’s largest department store operator, announced on Friday that it would reduce the opening hours of six stores in and around Tokyo starting Monday and running through March 13. The stores will open at 11 instead of 10, so that staff can avoid riding crowded trains during rush hour. In the northern prefecture of Hokkaido, where the governor has declared a state of emergency, three Mitsukoshi and Marui stores closed on Sunday, aside from the food halls. From Monday through March 19, they will operate at reduced hours, opening at 11 instead of 10:30.

Even before stores started to reduce their opening hours, many retailers in Japan had begun to see their sales contract, due in part to the virus outbreak, which has led to a drastic decrease in the number of international tourists visiting the country.

Isetan Mitsukoshi said same-store sales at its five department stores in the Tokyo metropolitan area had fallen 15.3 percent on the year in February. The retailer’s sales had dropped sharply in October when a consumption tax hike dealt a blow to Japan’s economy, but they had been gradually recovering through January.

Takashimaya said February sales among its 17 department stores in Japan declined by 11.7 percent year-on-year. Only three individual stores saw their sales increase last month. All of those stores are away from major tourist areas, and none of them saw growth of more than 0.6 percent. The biggest drop by a single store came from Takashimaya Osaka, where sales plummeted 25.6 percent.

“Tough conditions for seasonal merchandise brought on by a mild winter, the effects of the sales tax increase, and the worldwide spread of the novel coronavirus, which has led to a large decrease in tax-free sales as well as a tendency for people to avoid going out for nonessential and non-urgent things, meant that February sales weren’t able to reach the levels of last year,” Takashimaya said in a release.

H2O Retailing Corp., which operates the Hankyu and Hanshin chains of department stores, said comparative sales among those stores fell 14.3 percent on the year last month.

Consumers: The Next Coronavirus Worry for Fashion