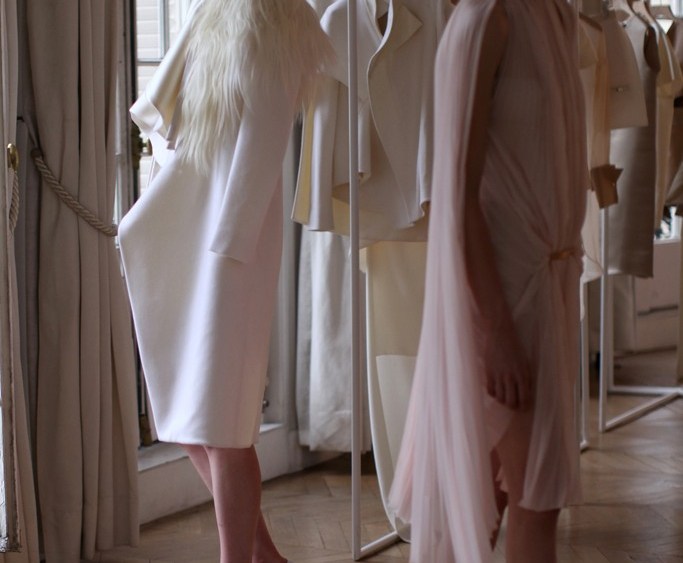 NEW YORK — Esteban Cortazar will introduce a namesake collection during New York Fashion Week, thanks to a little help from Net-a-porter.

Twenty-eight-year old Cortazar — who exited his post as head designer at Emanuel Ungaro in 2009 upon refusing to work with Lindsay Lohan — will reveal his first solo endeavor Sept. 12 on Net-a-porter.com. The e-tailer worked closely with the designer from his early sketches, to producing samples, developing a pricing structure and now, marketing and p.r. efforts. It’s the first time a pure play online retailer has helped a designer build a brand from the ground up.

Net-a-porter managing director Alison Loehnis and fashion director Holli Rogers were involved in Cortazar’s new collection from its inception. The Colombian-born designer said the idea was hatched almost two years ago, initially as a small capsule line to be sold on Net-a-porter. It shortly turned into an exclusive relaunch of the entire brand.

“The way we’re buying his brand — our approach is that of the way we would buy into a more established brand,” Loehnis said, declining to reveal the dollar amount the company has pumped into the venture. She calls the investment “sizable,” adding that Net-a-porter will buy the collection in a “robust” way. Industry experts estimate that retail sales for the brand have the potential to be a few million in the first year.

For the time being, the brand will be carried exclusively at the e-tailer, but Cortazar expressed a desire to eventually open up distribution to select retailers while having Net-a-porter remain the exclusive online carrier.

Cortazar said the 17-look, 30-piece collection — with a neutral palette done in varying matte and shiny finishes of ivory, blush, nude and baby pink — began as a “white canvas” that he built upon to signify a fresh start. His inspiration was a house in Barcelona designed by Spanish architect Ricardo Bofill. The house is also where the look book for the line was shot this summer.

The range of modern, draped-yet-tailored gowns, trousers with hardware on the hem and slits, shorts, skirts, jackets and tops is fashioned from fabrics such as double-faced duchess satin, cotton wool, cadi (a mixed polyester material from Japan), chiffon and leather.

“I didn’t want to do a sportswear collection. I wanted [to do pieces with] a complexity that is understandable and digestible — high designer looking clothes for high contemporary prices,” Cortazar said of the selection, where a rose gold oversize jersey T-shirt starts at $270, a gown can retail for around $1,800 and the most expensive piece is a $2,700 ivory cotton wool coat with a double-faced duchess satin and goat hair collar.

Cortazar has also created corresponding jewelry in collaboration with Alican Icoz — a collar, a double-finger ring and a hand bracelet — all 22-karat gold-plated brass adorned with jagged white quartz.

Loehnis anticipates the line will resonate with consumers because of its ability to transcend seasons. This is especially important because of the site’s “buy now, wear now” philosophy, as well as its international reach (it ships to more than 150 countries).

He called the partnership between Net-a-porter and himself a true collaboration between retailer and designer — and he marvels at the ability the e-tailer has to instantly transform a collection into a global brand by selling on just one channel: online.

Loehnis said that although Net-a-porter has facilitated Cortazar’s relaunch and has put ample marketing and public relations resources at his disposal, it hasn’t set the designer up with his own house.

“We helped him kick-start the business, and our role is the 21st-century marketing partner,” she said. “We’re broadcasting his brand all over the world to an incredibly affluent luxury consumer. It’s a global launch — exclusive to us in partnership with him. It’s his design and vision. We consider ourselves his marketing partner.”