Francisco Costa to Do Calvin Klein Capsule Line for Macy’s

Designer is creating an exclusive dress collection for the retailer's spring promotion, "A Magical Journey to Brasil."

By David Moin and Marc Karimzadeh on April 3, 2012
View Slideshow 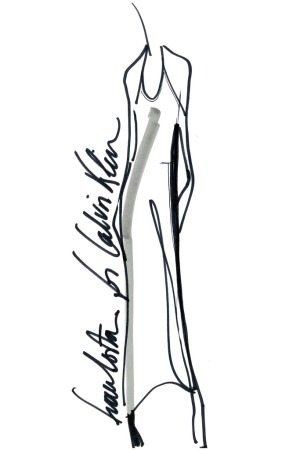 NEW YORK — When Macy’s kicks off its spring promotion — “A Magical Journey to Brasil” — next month, it will bring a distinct Brazilian flavor to its stores and, with it, one of the country’s most acclaimed designers: Francisco Costa.

This story first appeared in the April 3, 2012 issue of WWD. Subscribe Today.

As part of the promotion, Costa, who serves as women’s creative director of the designer-level Calvin Klein Collection, is creating a limited edition capsule line of dresses under the Francisco Costa for Calvin Klein nameplate, replete with its own label and hangtag. With retail price points from $135 to $180, it marks the first time Costa is bringing his designs to the more affordable arena at a national retailer.

“This fresh, youthful line of dresses reflects both my roots and the modern, yet timeless spirit of Calvin Klein,” said Costa, who is a native of Guarani, Brazil.

When Macy’s executives approached Tom Murry, president and chief executive officer of Calvin Klein Inc., about the Brazil promotion and the idea of Costa designing a capsule line for it, he jumped at the chance.

“From a branding standpoint, a limited edition capsule — a one-time event celebrating Brazil and the fact that Francisco is Brazilian and designs for Calvin Klein Collection — felt like a wonderful brand-building opportunity, as well as a commercial opportunity,” he said.

Macy’s executives also consider it a win-win. “This is a huge coup for us,” said Martine Reardon, Macy’s Inc.’s executive vice president of marketing. “We obviously have a huge distribution of Calvin Klein products but we do not carry the [designer] collection that Francisco creates. Unfortunately, those price points are not within Macy’s price points.”

She said Costa’s inspiration for his capsule collection “really came from some of the architecture in Brazil and the sunset on the horizon there” rather than the bright, happy colors and bold graphic prints that will be very evident in the promotion and that Brazilian designers are known for.

Costa translated the purist Calvin Klein aesthetic with pure lines and clean shapes for dresses in crepe and jersey materials.

Reardon also said Costa’s collection will be housed in a shop and promoted with outdoor and online marketing, direct mail, a video shot in Brazil, and other multimedia.

The line is exclusive to the two-month promotion and will be available at more than 80 Macy’s stores, as well as macys.com. The dresses will be unveiled on May 15, just in time for the program’s kickoff.

Costa is not the only CKI designer to create special product for the promotion. Kevin Carrigan, the global creative director for ck Calvin Klein, Calvin Klein and Calvin Klein Jeans, created a collection of men’s and women’s Calvin Klein apparel for the occasion, which features Brazilian touches through vibrant colors and prints, and extends to accessories and a special “Brasil”-inspired offering of Calvin Klein Underwear.

During the promotion, which will benefit the Amazon Rainforest, the designs and culture of one of South America’s fastest-growing economies will be spotlighted, and ready-to-wear and accessories will be the largest component. Almost all of Macy’s 800 stores will have something Brazil-related, although the bulk of the program will be at 300 Macy’s locations. Shops for authentic Brazilian products in fashion, home, beauty, men’s wear, accessories and art will be created, and Macy’s is collaborating with other designers from the U.S. and Brazil on exclusives, though Reardon declined to disclose other participants.