Fashion Industry Gallery is fully leased and looking to expand. 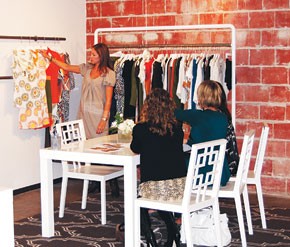 DALLAS — Fashion Industry Gallery, the boutique-style wholesale mart in downtown Dallas that focuses on contemporary, denim and accessories, is fully leased and has a waiting list of vendors seeking new permanent space.

“We’ve come a long way since we opened in January 2004, and we’re making plans now for even more growth in 2008 — we remain 100 percent leased,” said Shelli Mers, director at FIG, noting that FIG has more than 50 permanent showrooms, over 50,000 square feet of showroom space and in excess of 15,000 square feet devoted to the temporary juried show called Shop.

“The focus in 2008 is on continuing to improve our offerings for the fashion industry, by getting only the best lines for Shop and for our permanent showrooms. We’re doing this by broadening our reach with buyers in the Southwest U.S. and beyond through Ashley Gage, our full-time retail development manager, and Joseph Scroggins, our sales manager.”

FIG is looking beyond its present location on Ross Avenue in the downtown Arts District for future expansion, with the possibility of taking space in an office building across the street, though details are still tentative.

“We witnessed the largest ever showing of guest designers at our October 2007 show, including San Francisco-based Julie Chaiken. Overall, 2007 was a great year for us. Our temporary show, Shop, continues to expand, and buyer traffic continues to increase as well,” said Marlene Fogarty, communications director at FIG.

“We’re always about doing what best suits our vendors and the retailers who shop FIG, and we believe Thursday to Sunday is their preferred market date pattern,” said Mers. “But beyond date patterns, there’s something even more important to retailers — having the right merchandise for their stores. And that’s what we built FIG on and will continue to expand on: having the right assortments and styles so that retailers can continue to succeed at their stores.”