By Sharon Edelson and Rachel Strugatz on November 29, 2011
View Slideshow 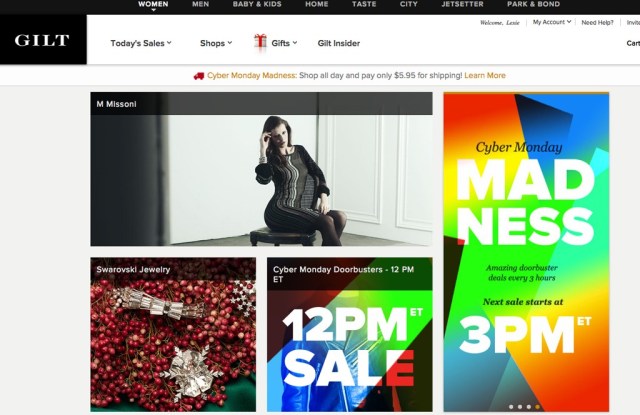 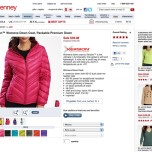 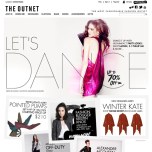 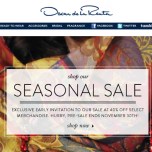 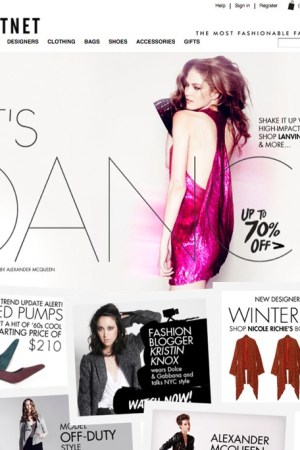 Courtesy of THE OUTNET 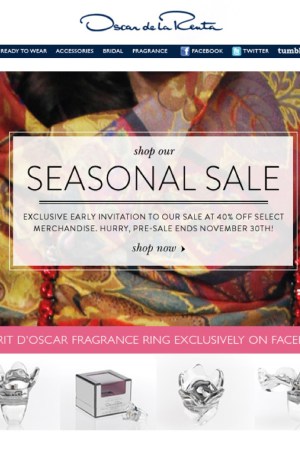 Online sales Monday are expected to top last year’s Cyber Monday total of $1 billion, the record for online sales for a single day. Retailers were seeing double-digit increases all day Monday, which followed equally strong online sales on Thanksgiving Day and over Black Friday weekend. And more and more of that shopping isn’t being done on a computer, but on a smartphone or tablet device.

A survey for Shop.org by BIGresearch found that 122.9 million Americans planned to shop on Cyber Monday, up from the estimated 106.9 million who shopped in 2010. According to the National Retail Federation, 37.8 percent of shoppers’ total weekend spending went to online purchases, up from 33.3 percent last year. Forrester Research estimated a record $60 billion in online sales for the holiday season, up 15 percent from last year.

As of 3 p.m. Eastern Standard Time on Monday, Forrester Research reported that online sales were up 15 percent since the same period last year. While most of the day’s orders came from laptops and PCs, mobile devices were expected to pick up momentum later in the evening as consumers headed home and continued shopping as they commuted.

“What I’ve heard anecdotally [so far] is that sites are up double digits over last year,” said Forrester Research’s vice president and research director Patti Freeman Evans. “Cyber Monday was the biggest day ever previously. They are already up over their biggest day ever — it’s pretty significant.”

Black Friday was heavily promoted, said Evans, adding that there were “more consumers reacting to these big days. These big days [such as Black Friday and Cyber Monday] are getting bigger.”

Marshal Cohen, chief industry analyst at NPD Group, said that while consumers were taking advantage of good deals, revenues will be the litmus test of the success of Cyber Monday. “It’s bigger this year than last year,” Cohen said. “However, it is becoming diluted to some degree. Cyber Monday will be less important next year. Ten days before Christmas is the busiest day online because it’s the cutoff date for guaranteed shipping. Cyber Monday is a very busy day, but it’s not most heavily purchased day.”

Online retailers were more aggressive this year, matching brick-and-mortar stores discount for discount, offering a plethora of deals and giving their ads a sense of urgency. “Online players got engaged earlier and more aggressively,” Cohen said.

“We are pleased with the reaction to our online sales, and are excited about the start of Cyber Week at target.com,” said a spokeswoman for the mass merchant. “Similar to last year, top items are predominantly toys and electronics. We’ve seen tremendous growth in both traffic and sales on our mobile site and mobile apps over the past few days. The results are unprecedented and holding strong today.”

J.C. Penney promoted a three-day sale that began on Sunday and continues through today. “We have 40,000 deals on jcpenney.com for Cyber Monday,” said Bill Gentner, senior vice president of marketing. “Cyber Monday is going to be very important for J.C. Penney this year.”

“Mobile is huge and growing so fast for us,” said HauteLook’s founder and chief executive officer Adam Bernhard. “Fourteen percent of sales in the first hour were done on mobile devices. It’s growing. Today, 20 percent to 30 percent of sales will be made on mobile devices. In addition, we signed 10,000 to 25,000 new members a day this weekend. These are indicators that it’s going to be a very strong holiday season.”

“Mobile shopping allows consumers to connect with retailers at a moments’ notice — in store or not,” said Forrester’s Evans. “This year, that ability is crucial and will likely influence a good deal of the sales this holiday.” Evans said that tablets, in particular, lend themselves to an enriched shopping experience with an engaging, hyper-visual component.

Midday results also indicated that the percentage of consumers using a mobile device to access a retailer’s site was 12.3 percent, and 7.4 percent of consumers are using a mobile device to complete the transaction, Forrester said. The iPhone is the leader of mobile traffic, with almost 5 percent of the market, followed by Android at just under 4 percent and the iPad at 3.26 percent.

“The rise of social media as a marketing tool in the fashion industry — where it’s commonplace for retailers and brands to garner followings in the millions — also had an affect on Cyber Monday,” said Maureen Mullen, director of research and advisory at Luxury Lab, or L2 Think Tank. “Like anything else, it [social media] allows you to get your message so much faster and so much more dynamically, so you actually see analysts tracking Cyber Monday.”

Scott Silverman, co-founder and vice president of marketing at IFeelGoods, and the Shop.org veteran who is said to have helped coin the term “Cyber Monday” in 2005, said social media has the ability to “amplify” deals “because people get excited and share them on Facebook and Twitter. When a retailer posts a promotion, all of its fans will see it and share it with their friends — increasing the message’s level of authenticity platform-wide. It’s one thing to hear a message from a retailer if they post a status update, but if you think it’s cool and you share it, then your friends are more likely to pay attention to what you share because they know and trust you.”

Flash sale site Gilt Groupe tried something new this year. In addition to all of the regular sales it runs, it launched a new sale every three hours with products from an array of categories with sharp prices. Susan Lyne, chairman of Gilt, said, “We are up significantly over last year at this time. For the first 90 minutes of our [Cyber Monday] sale, we had done 85 percent of last year’s total sale. For us, on Black Friday, mobile crushed it. Mobile has been an increasing share of our total sales for a while now. On Black Friday we did a number of mobile-only sales, recognizing that a lot of people would be standing in lines [at brick-and-mortar retailers]. Mobile on Black Friday accounted for 75 percent of our sales. It was over 30 percent of our sales for the whole weekend.”

“We saw a coming out party for mobile commerce,” agreed Ben Fischman, founder and ceo of flash sale site Rue La La. “One in every three orders was done via a mobile device and nine out of 10 orders came from a device made by Apple. We had a record-breaking weekend —and it’s become Cyber Weekend. On Thursday at 8 p.m., the traffic became strong and it continued strong. This morning at 11 a.m. it was incredibly strong. Between 11 a.m. and 12 p.m., we sold 10,000 pairs of shoes. The customer is shopping for gifts and for herself. I believe there’s a buy-now, wear-now attitude.”

Net-a-porter’s biannual sale started Friday and dresses got the most hits, said Alison Loehnis, vice president of sales and marketing, adding, “This suggests women are shopping for themselves.”

At social shopping search engine ShopStyle, sequin dresses were the top item on Cyber Monday, followed by lace dresses, over-the-knee boots and Burberry items. ShopStyle generated over $2.3 million in sales on Black Friday for its partners include Neiman Marcus, ShopBop and Net-a-Porter, and projects a 25 percent to 30 percent increase from Cyber Monday 2010’s $1.2 million in sales.

Barbara Levy, vice president of retail at Ideeli.com, said the site was seeing double-digit increases. “I wouldn’t be surprised if our business today doubled over last year’s Cyber Monday,” she said. “Today, the consumer is doing a lot of self-buying. We have sales focused on luxury, a who’s who of designers. We had a luxury shoe that sold out in the first hour and we have 1,000 people on the waiting list. Bestsellers include shoes, boots, dresses, handbags, wraps, cold weather accessories, cashmere and colored denim. Merchandise like shoes and jeans, they’re buying for themselves.”

Zappos didn’t offer any incentives for shoppers, according to ceo Tony Hsieh, who said the full margin retailer wants customers to purchase from the site because of the vast selection and service, which includes free shipping both ways and a 365-day return policy.

“I actually got up before 7 a.m. and sales were already doing pretty well. It looks we’re on track for a record day this year, and our biggest Cyber Monday in history as well,” Hsieh said, noting that Uggs were performing particularly well, as well as brands such as Nike and New Balance.

And Rue La La’s Fishman believes the best days might yet be ahead. He called Thanksgiving weekend “an appetizer. The biggest sales days are yet to come. Dec. 5 to 15 is the biggest time for e-commerce. We asked our members about their plans and 75 percent said they didn’t plan to visit a store on Black Friday or during the course of Thanksgiving weekend. More than 50 percent said they’d spend the same or less online than last year and 80 percent said they’d spend more online this year. It’s at the expense of the brick-and-mortar world. A huge amount of spending is being done online.”