In addition to introducing a full range of optical and sun frames, the designer will launch stand-alone e-commerce sites dedicated to the category. 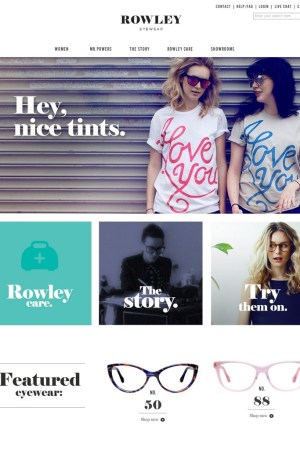 NEW YORK — Cynthia Rowley is gearing up for her latest venture: an eyewear e-commerce business that launches today in partnership with longtime eyewear licensee B. Robinson.

In addition to introducing a full range of optical and sun frames — Rowley Eyewear for women and Mr. Powers for men — the designer will launch stand-alone e-commerce sites dedicated to the category at rowleyeyewear.com and mrpowerseyewear.com.

With a business model similar to sites such as Eyefly and Lookmatic, sunglasses retail for $99 and optical and prescription sun frames for $129. Customers can select four pairs to try on at home for free, and have seven days to decide which ones they want to keep — with free shipping both ways.

“We know we’re following a model that’s out there, but just like any other retail model, or any other online retail model — it works. But this is our version, it has an aesthetic that makes it different,” Rowley told WWD of applying the online retail market for eyewear to her company. “It’s disrupting and sort of reinventing the eyewear business, so it’s really exciting to be part of a movement that’s truly changing the way people shop for this category.”

Rowley has produced eyewear for almost two decades, where product retailed from $175 and $275 and was sold at specialty, optical as well as her own stores. But with this initiative, the price points have come down substantially. According to Peter Arnold, chief executive officer of Cynthia Rowley, the eyewear business going forward will be an entirely direct-to-consumer model. He projected that this could become the most significant accessory category for the company, and the second-largest driver of sales after apparel. Arnold estimated that eyewear will eventually comprise 15 to 20 percent of the overall business.

Rowley will also implement “Rowley Care” — what the designer calls her version of “fashion insurance” — to make replacing lost or broken frames less of an obstacle, as well as encourage consumers to switch up their eyewear they wear with shoes, a handbag or jewelry. Upon one’s first full-price purchase, the company is giving the option to join Rowley Care, where for $50 (or monthly $5 payments), any frames a customer buys during the next 12 months are 50 percent off. In addition, if a customer loses or damages their glasses, they can get another pair half off.

The modern silhouettes have vintage elements — like screws and pins — and come in matte and crystal finishes in various blush tones (for women) and green horn and warm browns (for men). Upon launch, there will be 18 women’s and 13 men’s styles and offerings will change seasonally, in tandem with her ready-to-wear collection.

“The aesthetic [for eyewear] is just like what my brand is known for — being a little bit classic, a little bit sporty and having an adventurous or artistic stretch sometimes. It’s a little bold but still really wearable,” Rowley said.

The lines will also be on view at Rowley’s seven freestanding U.S. doors (with potential plans to roll out eyewear in international doors). All stores will have iPads to purchase the frames from, and in certain locations — like Montauk, N.Y. — nonprescription sunglasses will be available on the spot.