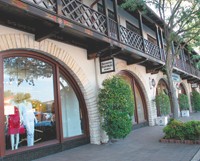 DALLAS — Faced with mall competition that is more intense than ever, Highland Park Village shopping center here marks its 75th anniversary this month, charting a course that mixes top luxury brands with conveniences such as a supermarket and shoe repair shop.

The Village, designated a national historic landmark as the oldest U.S. shopping center, is adjusting its fashion mix to meet the needs of affluent customers.

A youth-oriented Rugby store by Polo Ralph Lauren is moving into a former Ann Taylor store. For fall, trendy Scoop and Scoop Kids will bow, along with a designer bridal salon called Warren Barron and W. Noble Boutique, a designer jewelry shop owned by William Noble Rare Jewels, one of Dallas’ most exclusive jewelers. In addition, Beretta is expanding by 1,000 square feet to stock more pricy guns, hunting duds and field accoutrements and Bang & Olufsen is taking a space once occupied by Banana Republic Men’s.

“We don’t want to have something for everybody, but we can be everything to some people,” said Jackie Miller Stewart, president of Henry S. Miller Interests Inc., which owns the center.

Combined with the recent openings of Tory Burch and Calypso, Miller Stewart’s goal is to add a hip component to the mix that addresses family lifestyle needs and draws a younger clientele.

In the ultracompetitive Dallas retail market, where it goes against NorthPark Center, Galleria Dallas and specialty stores, the Village benefits from its location across from the Dallas Country Club in the middle of Highland Park, one of the wealthiest U.S. communities. The economically potent population of 8,842 has a household median income of $149,389, according to the Census Bureau, and is home to many of the city’s top executives and what is considered “old money.”

With its Mediterranean architecture, soft piped music and array of restaurants, stores and a cinema, the Village is an open-air pedestrian center with a cozy ambience.

The Village is well merchandised and enjoys unusual loyalty, but is still susceptible to losing some market share to NorthPark Center, said Ed Cox, a marketing professor and director of the J.C. Penney Center for Retail Excellence at Dallas’ Southern Methodist University.

“Dallas is clearly over-stored compared with many other markets around the country,” Cox said, mentioning this year’s expansion of NorthPark and the $4 billion Victory mixed-use project downtown. “But I think [the Village] will hold up quite well. It has a strong neighborhood feel and is much more convenient in terms of location, and avoiding the mall experience for many customers is a benefit.”

That’s not to say there haven’t been stumbles. Prada and Christian Dior both shut after relatively short runs, and Calvin Klein closed in December after more than 20 years at the center.

“The customer profile has changed in Highland Park Village since the Dallas Calvin Klein store opened,” Tom Murry, president and chief operating officer of Calvin Klein Inc., said in a statement. He added that the company is focusing more on international stores as well as its wholesale business.

Miller Stewart, who presided at a 75th anniversary party at the center Friday night, dismissed the suggestion that the customer is different, saying business this year is up 11 percent for fashion stores in a center that averages more than $800 in sales per square foot.

She also is unfazed by the competition.

“The attention that has been drawn to Dallas as a retail destination for Dallasites as well as the region, surrounding states and Mexico has been very positive,” Miller Stewart said. “And we have so many customers who flat-out don’t want to go to a mall.”

The Village was a sleepy venue until being purchased by real estate broker Henry S. Miller Jr., Miller Stewart’s father, and other Miller relatives in 1976.

“It had many misfits in tenancy and it had been allowed to degenerate physically,” Miller, 91, who lived blocks from the center, wrote in an e-mail. “Among its tenants were a venetian blind factory and a plant store with a dirt floor that we replaced with Chanel.”

The turning point came in 1978, when Ralph Lauren opened a flagship, as well as the opening of Hermès in 1985. Both have since expanded. The Village has built a reputation for luxury with marquee brands in its 55-store tenant base, including Chanel, Escada, Jimmy Choo, Cole Haan, Luca Luca and St. John.

The Village is one of only four family-owned upscale centers in the nation, along with the Americana Manhasset on New York’s Long Island, Bal Harbour Shops in Florida and South Coast Plaza in California, Miller Stewart said.

The entire package attracted Scoop owners Uzi Ben Abraham and Stefani Greenfield, who are leasing their first store in Texas at the Village.

“We think it is the most charming mall,” Greenfield said. “There is a warm lifestyle that you see with people there to shop and eat, and there’s great parking. It has a wonderful feeling. You want to shop.”