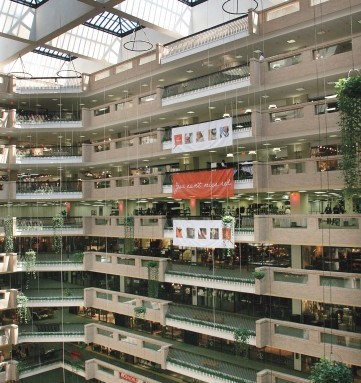 Pent-up demand for new looks is driving a turnaround in Dallas.

DALLAS — The Dallas Market Center is approaching the second half of 2009 with new efforts to attract buyers and augment its product mix. Business picked up at DMC during the recent fashion and accessories show, held June 4 to 7, which bodes well for the second half, said Bill Winsor, chief executive officer of the Dallas Market Center. “There is pent-up demand,” he said. “Buyers are saying they need something new for their stores. Will the second half have the right momentum? I think so. Our region has been less impacted relative to the downturn [compared with] California, the East Coast and the Southeast.” Cindy Morris, chief operating officer of the Dallas Market Center, said retail development is a primary focus in the second half of the year. “We have strategies to attract loyal buyers, go after buyers who used to shop here and new buyers who haven’t been here before.

We have additional dollars to bring them in and incredible hotel rates.” The funds came from canceling the Dallas Fashion Awards program in October in order to create programs that reach a wider swath of buyers. The DMC’s retail team concentrates in the Southwest and Midwest, while its international staff has been reaching out to big retail markets in Mexico’s Guadalajara, Monterrey and Mexico City, as well as the Dominican Republic. The goal is to attract them to the Oct. 22 to 25 spring market, when merchandise is best suited to their climates. Mexico is so close, and the currency exchange benefits them,” said Ivonne Kinser, vice president of international development for the Market Center Management Co., an affiliate of the Dallas Market Center. “There are strict limits on Chinese imports and outrageous taxes, but with the U.S. there are low shipping costs and free trade so it’s a no-brainer for them.” Market Center Management has four staffers focused on international trade — two Spanish speakers who travel in Mexico and Central and South America, one dedicated to Europe, India and Turkey and a fourth in Asia. They promotethe myriad categories at the massive market center, which features 5 million square feet of gifts, tabletop, furnishings, lighting, fine jewelry, fashion and accessories and 50 markets a year.

Kinser is also planning to showcase between 10 and 20 women’s fashion and accessories designers from Colombia during the October show. “In the last 10 years Colombia has developed as the strongest fashion market in Latin America,” said Kinser, who is a native of Venezuela. “Brazil is bigger as a market, but the trendsetter is definitely Colombia. The strength, number and quality of Colombian designers is well-known in Latin America. They are very oriented to evening and cocktail because in their culture when you go out, you dress up.” Kinser is targeting highend designers who are familiar  with exporting by working with ProExport, an agency of the Colombian government, and Amcham, the American-Colombian chamber of commerce. She plans to visit designers later this month to finalize exhibitor contracts. The Colombians will be grouped in a pavilion in the Scene temporary show on the 13th floor of the World Trade Center. Kinser plans to promote them with fashion shows, publicity and direct marketing.

DALLAS — An upbeat market early this month at Fashion Industry Gallery has raised expectations for the second half of the year. “This will be an OK year if August and October follow the trend we’ve seen in June,” said John Sughrue, chief executive officer of Brook Partners, which developed and manages the venue. “With what’s been happening in the economy, we have been much more aggressive in trying to recruit buyers and designers and to explain the offering of what’s going on in Dallas. Our plan is to sign leases and be aggressive about marketing the space.” FIG has carved a niche as a destination for key contemporary brands such as Trina Turk, Poleci, Juicy Couture and more than 50 lines of designer fashion jewelry.

The loftlike complex also features premium denim, urban men’s wear, handbags and bridge resources. It features permanent showrooms plus the Shop booth show, here exhibitors include Gypsy 05, Habitual and Susana Monaco. The venue occupies two floors of Southwest Plaza downtown next to the Dallas Museum of Art. Sughrue had been planning to expand FIG into the basement, but postponed that until the economy recovers. Instead, he has generated revenue by attracting more nonwholesale events to the space, from highprofile art shows to private parties. In addition to five wholesale markets a year, FIG hosts the biannual FIG Finale, a clearance sale for invited retailers and designers. The event featured 30 exhibitors in January and has expanded from local merchants and designers to include those in other Texas cities and neighboring states. FIG Finale is scheduled for Aug. 28 to 29. Bekah McKee, the new marketing director, is preparing to tout FIG’s assets to retailers in the Southwest and Midwest via visits, phone calls and e-mail, as well as advertising. There are also plans to add fashion trend tips to FIG’s Web site to give more value to buyers. “In June, we had many new first-time FIG buyers from Illinois, Minnesota, Nebraska, etc., so we want to reach outside of our region to promote the cost-effectiveness of traveling to the Dallas market,” she said. “We believe we can do this as we inform buyers about FIG, lines showing and travel incentives.” “The more we can offer the retailers — great buying, the ability to turn excess inventory into cash and the ability to share our knowledge — that’s when it really works and there are these synergies,” Sughrue said.