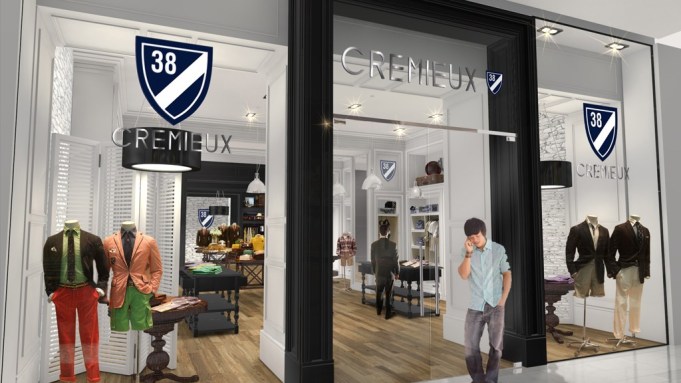 The Daniel Cremieux brand is planning a significant retail rollout, one that will include the opening of its first U.S. store in New York’s SoHo neighborhood in April.

For the past 14 years, Cremieux has had an exclusive licensing agreement with Dillard’s in the U.S., but three years ago, the upscale French brand opened a showroom on Mercer Street, and Stephane Cremieux, son of the founder, relocated to New York City. The plan at the time was to offer the Cremieux 38 premium-priced label to American retailers.

Since the showroom opened, Stephane Cremieux said the brand has been “focusing on our existing partnership with Dillard’s.” The men’s sportswear is merchandised through in-store shops at all 300 Dillard’s doors and there are another 300 jeans shops in the department stores as well. Women’s wear is offered in 256 units and the home collection is in about 200 doors. “It’s the second largest men’s brand at Dillard’s,” Cremieux said. The largest label is Polo.

The Dillard’s business has its limitations. The company’s stores are concentrated in the South and tend to gravitate more toward basics and warm-weather merchandise. “We love down jackets and flannel shirts and wool pants and corduroys,” he said, pointing to a $2,500 down parka that uses Loro Piana Storm System fabrics and has lots of bells and whistles. A soft-shoulder, heavy flannel suit is another product that would not appeal to the department store, he added. “This is a new avenue that we don’t cover with Dillard’s today.”

With the department store’s blessing, Cremieux said, the line is bringing its collection to areas in the U.S. where Dillard’s has no presence. “We decided to focus on freestanding stores,” he explained. “We knew if we wanted to keep the ethos of the brand assortment, we could only do that if we control our own stores.”

The first Daniel Cremieux store in the States will be 700 square feet at 65 Mercer Street, between Broome Street and Spring Street, two blocks from the showroom. It will be next to Kate Spade and in the same area as Carven, Chanel, Burberry and Etro.

The store will carry the Cremieux 38 collection, which is higher priced than the Blue Label available at Dillard’s, and 15 percent of the mix will be created exclusively for the store. It will also offer some co-branded product in areas where the brand has no expertise, such as footwear. Cremieux will partner with Rancourt, Joseph Cheaney and Alden for the shoe assortment in the store.

Because of the size of the store, it will carry only men’s wear. It is expected to open on April 24.

“We would like to open more stores,” Cremieux said, mentioning Miami and Aventura, Fla., as well as a second unit in the New York area, possibly in the Hamptons. These areas are not within Dillard’s trading area and Cremieux already has customers in these markets, he said.

Outside the U.S., Cremieux operates two stores in France, two in Spain and another in Mexico City. In Paris, the company is relocating and expanding its store and will open a 2,500-square-foot unit at 185 Boulevard Saint-Germain on April 3. Other units are planned for Jeddah in Saudi Arabia in April, Dubai, and Kaoshiung and Taipai in Taiwan in September, followed by several units in Doha, Qatar in 2015. The original unit in Saint-Tropez, which was opened in 1976, is also being expanded and the brand hopes to add several wholesale accounts in the U.S.

Martin Miller, who represents the label in the U.S., said since he negotiated the relationship with Dillard’s in 1999, the brand has “grown significantly each year and increased its profitability.” They declined to provide a volume figure, but market sources put the brand’s worldwide sales at $180 million. “This is an opportunity to expand the Cremieux brand in the U.S.,” he continued, and the opening of the new stores around the world “reinforces the international quality of the brand,” said Miller.