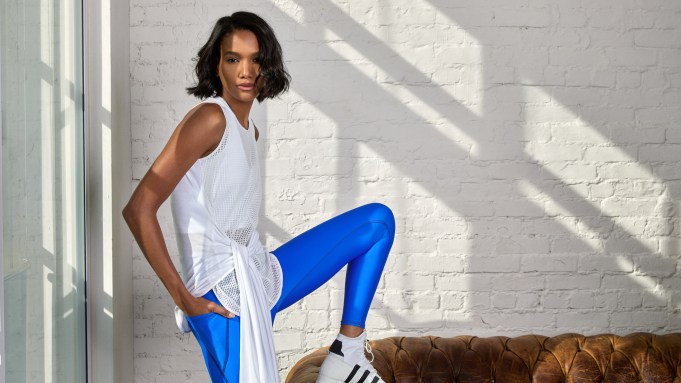 Dany Garcia, an entrepreneur whose companies span business, lifestyle, entertainment and sports, now wants a piece of the fashion action. Today she is launching GSTQ as an e-commerce platform.

As cofounder of Seven Bucks Production; founder, chairwoman and chief executive officer of The Garcia Cos. and TGC Management, and chairwoman and owner of the XFL football league, Garcia’s portfolio includes Voss, Teremana Tequila, Salt & Straw and Project Rock by Under Armour. A professional bodybuilder, Garcia is the first female owner of a major American sports league and a successful producer of such movies as “Jumanji: Welcome to the Jungle,” “Jumanji: The Next Level,” “Hobbs & Shaw,” “Rampage” and “Jungle Cruise,” as well as TV shows such as the NBC biopic series, “Young Rock,” HBO’s “Ballers,” as well as the HBO documentary, “Rock and a Hard Place,” and NBC’s “The Titan Games.” Those projects involved her business partner and former husband Dwayne “The Rock” Johnson.

“I do a lot of big, large brand and universe building,” said the 52-year-old Garcia of her decision to enter the fashion world. “The GSTQ brand is an idea I formulated when I was 16 years old. Literally it has sat with me for decades.”

Garcia traces it back to being a musician in the Roxbury High School orchestra in New Jersey.

“I was very much a duck out of water. I had these huge aspirations, and my family never knew what to do with me. My ideas were so different and how I saw life. We played the royal anthem, ‘God Save the Queen.’ I saw the sheet music that was given to me and I saw that title and the words, ‘God Save the Queen, and this idea, that the entire country, Britain and the Commonwealth and everyone, was singing this anthem about the queen, and it became my own mantra, ‘God Save the Queen,’  you can do this. There was nothing in my life reflecting that to me, that there was more greatness than what was in my life, and I started to write, ‘GSTQ, GSTQ.'”

She explained that fashion had always been an “outside experience,” and she was more involved in Hollywood and other business interests. But because she’s a professional bodybuilder, she’s always had a physique that was a little larger. “I needed clothes that could move with me, that could transition, and I couldn’t find anything. I was so happy for athleisure and thought ‘This is great,’ except it’s still gym pants. It had an idea, but it wasn’t fully taken all the way so you can be polished.”

She wanted to wear clothing that looked tailored and had flexibility in movement. Although she’s been thinking about doing this for decades, it was only in the last three years that she began working on it and slowly bringing the idea to life.

The collection is designed by Garcia and her creative director, Faith Lucas, who graduated from Parsons School of Design and in addition to being a design consultant, has worked for such companies as J.C. Penney and Xcel Brands.

GSTQ is comprised of 40 styles with retail prices ranging from $48 for a structured layering top in accent colors to $285 for a stadium jacket with modular elements that can serve as a sideline-friendly hooded windbreaker and a cap dress. There’s a wrap scarf sweater in heather gray and a jumpsuit with a hoodie. There’s also a black midi dress that features discreet cutouts and tailoring to feel polished, as well as a tech-twill blazer.

Overall, she said, “It’s about empowering a woman who has 15-hour workdays. It’s about surrounding someone who’s making moves.”

What was important to Garcia was not only how the clothes looked on her and how she presented herself in them, but that when she got home, she wasn’t desperate to take them off.

“Like you, so much of what I do is so mental. If I’m being constricted or my shoes are hurting me, or my shirt is a little too tight or that waist is cutting into me, it begins to take away from my creativity and things I need to do,” Garcia said. She said the fabrics have a little give, they’re cut in a way that has room. “You’re in no way struggling to keep the clothes on you, or keep them looking right as you’re moving. Movement is really important to me, not only because I have been an athlete all my life, but because we are so on the go. We were, and we will be again,” she said.

For the first collection, GSTQ will offer dresses, outerwear, sportswear that’s more elevated and performance sportswear. “You can wear them with heels, or with your favorite sneakers,” she said. Garcia said they will be offering two anchor collections a year, with capsules in between. For the most part, sizes will range from XS to 3XL, or 2 to 20. There are a few styles that only run XS to XL or 2 to 14.

She is financing the fashion business herself.

While Garcia is based in Orlando, Fla., she said the company is based in New York. They started with four individuals and now there are more than 20 employees.

In designing the web site, she wanted to create a community of like-minded individuals and celebrate the customer. She said she will have individuals working as ambassadors for the line.

While the business is entirely e-commerce to start, she might consider a brick-and-mortar store. “I think the dream at some point will be to have a brick-and-mortar experience. That would be exciting. That’s probably a few years down the line,” she said. She also can see having some partners with specialty stores over the next 12 months. “We’ll be starting the conversations at the end of the year,” she said.

As for additional categories, Garcia said, “I’m definitely thinking about men’s wear next. The majority of individuals I work with are men.” Kids’ wear also feels like a natural progression, but she said she wants “to be doing women’s and men’s with undeniable excellence before moving into kids’ wear.” Footwear and accessories are other possibilities.

Gracia said  the company plans to tie in with various charities, such as an upcoming one with Step Up in New York City, which focuses on girls from underresourced communities and helps them fulfill their potential. GSTQ is launching The Mindset Project, which spotlights the partnership between three change-making women and three artists bringing their mind-sets to life through artwork. Each artist created a T-shirt inspired by their artwork with 100 percent of the proceeds going to Step Up to support the mentorship of the next generation of young mind-sets.

They are also teaming with influencers of like-minded women. They will utilize social media and paid digital promotions and there will be content curation.

Asked what she anticipates will be the bestsellers, she thinks the jumpsuit will do well. “We have some wonderful athletic dresses with a slit on the side. My favorite pieces are the stadium jackets.”

Last year, after purchasing the XFL football league, she began wondering how she could style the large jackets the players wear during the cold months for a woman. “It’s such a badass jacket. And so we were inspired for that, and we shaped and formed it, the jacket has straps when you take it off, it stays on you and you don’t have to carry it in your hands.” It hits just a touch below the knee. ‘It’s very athletic and it’s my favorite piece,” she said.

“I hope to break through from what I’ve done very well throughout my career, which is my focus on the relationship of the consumer,” she said. She said she’s done 38 films, “and none of these projects were ever done without thinking about the audience member sitting across the table and what we were going to bring that person.”

Instead of categorizing women by age group, she thinks about the type of woman they are. “We’re homing in on who she is inside and reflecting back to her that we believe just as much in what she can accomplish. I’m willing to go on a journey with our consumer the next 10, 15, 20 years and build a relationship,” she said.

Innovations such as slits and cuts and how the clothing drapes on the glutes factored into their design. “Again  I’m a body builder. Where does it land as you sit, how much restriction do you have when you’re trying to breathe and bend over? What is the surprise and delight in the zipper and the back pocket?” she said.

The collection, which is being produced  in countries such as Turkey, Portugal, China and the U.S., will begin with a spring drop. It has a little bit of summer and there are pieces that can move into fall.

As an entertainment and sports executive, Garcia is looking forward to getting involved in the fashion industry. “I see it as an opportunity. I’m talking [with the CFDA] about becoming more involved and doing mentoring and supporting people…I enjoy learning so much about it [fashion], having a new subject matter to become a student of  is very exciting,” she said.

Turning to her role as a producer, Garcia spoke about some of her upcoming projects. She is currently filming “Black Adam,” an American superhero film, and in July, her movie, “Jungle Cruise” will be released with Walt Disney, after a year and a half delay due to COVID-19.

And how does she manage to juggle it all?

“Time management, discipline and being on the East Coast helps. I get an additional three hours….I don’t have to run everything. I have to make sure everything’s running. I have a fabulous team. And now, clothes,” she said