Some might be concerned about the fate of luxury goods in today's uncertain economy, but David Yurman feels the time is right to get aggressive about expanding overseas. 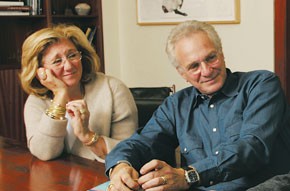 Some might be concerned about the fate of luxury goods in today’s uncertain economy, but David Yurman feels the time is right to get aggressive about expanding overseas.

The 28-year-old fine jewelry and watch firm is scooping up key sites in Asia, as well as in New York, to expand its retail network. Yurman opened its first international store in the IFC mall in Hong Kong on Saturday and has created an Asian subsidiary with headquarters nearby.

The New York-based company has signed a lease in Macau and is planning to open a store in Tokyo. This year, the brand also will move into Europe and Russia, and in 2009 it will delve into the Middle East, likely through wholesale distribution.

Yurman also has locked in a space for its Manhattan flagship at 712 Madison Avenue. The 6,000-square-foot, five-story landmark building is now occupied by Lalique. For the past decade, Yurman has had a store at 729 Madison Avenue and its fate is undetermined.

David Yurman has a network of 15 stores across the U.S. in cities such as Los Angeles, Boston, Chicago, Dallas and Costa Mesa, Calif., and also has a large wholesale business with such specialty stores as Neiman Marcus. Industry sources estimate sales of all Yurman products at retail to be about $720 million a year. Revenues have been growing at a rate of 20 percent annually.

Yurman chief executive officer Paul Blum told WWD that the company’s Asian business can be significant, but not as big as the U.S.

“We’re looking at Asia in a long-term way,” the ceo said. “We’ll feel out the business and will get out there as the brand is more well known. We’re not looking at it as a huge business early on. [Founders] David and Sybil Yurman are looking to the long term, to build this brand as a generational brand.”

The 1,000-square-foot Hong Kong unit uses the same store design as the one in the U.S., with dark brown zebra wood, marble interiors and exteriors and an elegant, Japanese-inspired aesthetic.

Starting this month, the firm will create a marketing and advertising blitz in Asia to gain brand awareness. Its Peter Lindbergh-photographed ad campaign, similar to the one running in the U.S., features Kate Moss, Daria Werbowy and Natalia Vodianova, and will be plastered on billboards and in magazines throughout the region. The firm also is teaming up with charities and organizing sponsorships.

Vivian Tan, who most recently ran Links of London’s Asian operation, has been named managing director of the David Yurman Asian subsidiary and is based in the Hong Kong headquarters. The firm is in the process of staffing that office.

Blum said it was key to open Hong Kong first of all the Asian stores because “it’s the crossroads of Asia.”

Details have not been ironed out for the new Madison Avenue store, though Blum called it an international flagship. An architect has not been named, nor has the firm decided what to do with all of the space. The new store will be located in a strip of Madison Avenue that, over the last 18 months, has become a center of high-end jewelry retailing. Brands such as Graff, Leviev, Chopard, Di Modolo, Kwiat and Ivanka Trump have opened or plan to open stores in the area.

“This is about the David Yurman company really planning for its future and using this opportunity to lock in a landmark location,” added Blum. “I’m not seeing people back out of spaces. We just feel there’s little more time to make the decision with the space. There’s not as much a frenzy as there was.”

Blum said sales have been strong, particularly in the past few months, and there has been no objection to the rising price of gold, which the company is now reflecting in its pricing.

“As gold has gotten more expensive, it has also gotten more precious. People know it’s worth more every day,” said Blum. “That is one of the beautiful things about the jewelry business. When you buy something for yourself or celebrate an event with jewelry, you add value to your life. It really transcends fashion and is really a long-term investment.”

In the coming months, the company will bow its two new categories: fragrance through a deal with Groupe Clarins and eyewear to be produced by Legacie.

“One of the things you do in a difficult economy is execute on your plan,” Blum said. “The Yurmans have been so supportive of that. They want to build this business as a legacy.”