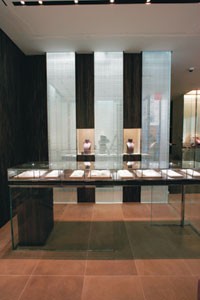 The joint venture between diamond mining and marketing company De Beers SA and luxury conglomerate LVMH Moet Hennessy Louis Vuitton is opening its first U.S. store today. The 6,000-square-foot flagship at 703 Fifth Avenue marks a step forward in the company’s long-anticipated plan to target the American consumer with a retail strategy that De Beers LV executives said will mark a departure from that of its competitors.

“It’s the most important market for us,” said De Beers LV chief executive officer Guy Leymarie. “It represents more than 50 percent of the worldwide consumption of diamonds. We wanted to be ready when we entered this market.”

De Beers LV, which was created in 2001 and is based in London, has a U.K. flagship on Old Bond Street and four boutiques in Japan. While Leymarie said business at each location is doing well, the company wanted to update its approach to better position itself for its American debut.

“We think the De Beers name stands for diamonds,” Leymarie said. “On the retail level, we wanted to make a very focused strategy on what we can bring to this market in terms of our experience with diamond selection.”

The company also wanted to make what Leymarie called a statement of modernity.

“We thought the London store was too masculine and this is something we tried to correct here,” he said.

Milanese architect Antonio Citterio was brought in to overhaul the Manhattan space, which previously was occupied by Louis Vuitton before the brand’s move up the street to 1 East 57th Street in February 2004. While the renovation has the same interplay of transparent glass, etched glass, aubergine glass, mahogany wood, honed limestone and neutral accents in colors such as light purple and ebony that Citterio used in the London location, the New York store focuses on intensifying the impression of transparency and light to create the illusion of what Leymarie called “walking inside a diamond.”

The two-floor Manhattan flagship will introduce a new segmented merchandising plan that U.S. ceo Alyce Alston said should make it more attractive to the self-purchase customer, a growing segment of the fine jewelry market. The store’s main showcase will be the Sparkle Room. The top floor will feature the Bridal Bar, which is outfitted with couches and cushioned stools to make the experience what Alston described as more personal and relaxing. The VIP shopping area will also appear there.

“In putting our plans together, we wanted to change the scope of the way diamond jewelry is sold in the U.S.,” said Alston. “So many brands are married to the past, which gives us a great opportunity to meet the demands of the market of the future. We wanted something chic and luxurious and accessible.”

De Beers LV will include pricing information in all its displays to help shoppers choose what works for them and what does not. It also will seek to make selecting a diamond less intimidating for the novice customer with the introduction of its Beauty Scan technology.

“This is a very strong differentiation factor for De Beers,” Leymarie said. “We try to cut for beauty, not weight. This technology can show you how the light goes into the stone.”

Among the store’s selections will be the company’s classics, including the Wildflowers collection featuring floral motifs accented with pave diamonds. There also will be three new groupings that enhance the cut and shape of the diamonds and were designed by Raphaele Canot, who joined De Beers LV in 2004 from Cartier as artistic director.

“What is interesting at De Beers is that it’s a new brand, even if its name is old and famous,” said Canot. “From an artistic point of view, this is a big difference. I don’t have to go back to archives or a history. It’s a new page to write.”

Of the three groupings, Canot’s Radiance collection will receive the most prominent positioning in the store. The collection includes the brand’s newest designs that play off a white gold or platinum diamond-shape frame that holds a tension-set diamond at its center. These frames sometimes work independently to hang like a charm off simple rings, earrings and necklaces. At other times, they interlock to form strands, medallions or balls. The most complex Radiance selections dangle several frames off earrings and rings for a cascading effect or group multiple frames in a cluster to create wiggly flower shapes atop a solid band.

“This collection is the best identity of the brand today,” said Canot. “It is inspired by the lightness and brilliance of our stones. It has a playful feeling as well. You can mix and match all of the pieces, and you can layer them, and this is very modern.”

Prices for this collection will begin at $700 and climb up to $1 million.

Canot’s second collection is called Fancy Games, and showcases earrings, necklaces and bracelets made of diamonds shaped in a combination of marquis, round and square fancy cuts to create intricate patterns such as Art Deco-inspired chandelier earrings and necklaces or pins in the shape of animals, cherries or apples. This collection’s entry-level retail price point is around $6,500.

In November, the store will introduce Canot’s third collection, called Talisman for Happiness. This will be the most casual line of the De Beers LV assortment. The designs will play up a combination of rough and polished diamonds.

“Every piece, even one at an entry-level price point, will be a one-off design due to the combination of rough and polished diamonds,” said Canot.

De Beers LV plans to follow its Manhattan store with another U.S. opening on Rodeo Drive in Beverly Hills, Calif., in November. Both U.S. store launches will be supported by an ad campaign that broke this month. The ads were shot in color by British photographer Miles Aldridge and are running in major fashion titles including W, Vogue, Vanity Fair, Town & Country and Departures, among others. W, Vogue and Vanity Fair are, like WWD, owned by Advance Publications Inc.

“The ads play off the emotional appeal of diamonds,” said Leymarie. “Not only can they be a part of the special rituals and celebrations of the most precious moments in your life, but they can also be simply an everyday pleasure.”

De Beers LV will also target newspaper and online search engines. Its advertising budget in the U.S. alone for the next six months in $4 million.

Over the next five years, the company plans to roll out 20 more stores in the U.S., in Chicago, Las Vegas, Miami, San Francisco, Palm Beach, Fla., and other cities.

“We are very pragmatic,” Leymarie said. “It depends on how successful we are in penetrating the market.”

International expansion plans for De Beers LV, which set aside $500 million to get the company off the ground in the first decade, may include a small store opening at the Royal Exchange in the City of London and flagship openings in Paris and Dubai, United Arab Emirates.