"Sexy on the Slopes" was the main message at ISPO, where ski apparel and equipment focused as much on fashion as technology. 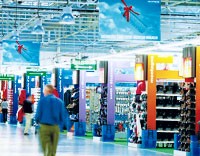 LILLE, France — Ask a French person to name a popular sports brand and they are just as likely to say Quechua or Tribord as Nike or Adidas.

They are the private labels of Décathlon, one of Europe’s fastest-growing sport retailers, with estimated sales of  3.5 billion euros, or $4.56 billion at current exchange, in 2004, with more than half of that coming from its eight in-house brands.

Quechua’s 2003 sales reached 400 million euros, or $520.9 million, with an expected growth rate of 20 percent for 2004, the company said. The brand is geared for skiers and snowboarders but also includes products for trekking and climbing.

Jean-Paul Constant, Quechua’s general manager, attributed the label’s market-share gains to prices roughly 30 percent less than such brands as Nike and designers who stay close to the sports for which they design.

Décathlon recently relocated brand offices to areas where activewear is in high demand. Quechua, for example, decamped from the retailer’s Lille headquarters to Chamonix, at the foot of majestic Mont Blanc.

“Our strategy is to bring together the sports consumer and our technical staff at the same location, so that the product development can be influenced and adapted by the user,” Constant said.

With the trend for off-trail skiing at its peak in Europe, Quechua designed trendy looks for women such as cropped, fitted ski jackets and slim-fitting ski pants with the latest waterproof materials and removable linings.

As for Tribord, a brand covering surf, sailing, swimming and diving, it chose the fishing docks of Hendaye on the southwest coast of France as its base. Tribord general manager Frédéric Duprez said the water-sport brand ranks sixth in its category worldwide, with 2003 sales of 200 million euros, or $260.4 million.

“We make sure that Tribord covers all the needs that may not be offered by other brands,” Duprez said.

Among other brands stocked within Décathlon’s colossal aisles are competitors such as Helly Hansen and Arena.

Other in-house brands include Décathlon Cycle; the fitness label Domyos; Inesis for racquet sports; the archery and fishing label Geologic; Kipsta for football, rugby and basketball, and, most recently, running brand Kalenji. Décathlon plans to add two brands to reach a total of 10 private labels this year, although the company declined to give specifics of the new labels.

According to Frédéric Tain, director of the Paris-based market-research firm Sports Guide, the 29-year-old company launched in-house brands once it had critical mass in Europe’s largest activewear market, with 220 stores in France alone.

Today, the privately-owned firm numbers 330 stores worldwide. The colossal white buildings, which average around 43,000 square feet, can be found in more than 13 countries in Europe, North and South America and Asia.  Its international expansion plan calls for 100 store openings between 2005 and 2008.

Most recently, Décathlon opened its second store in São Paulo, Brazil, while its fifth store in China opened in Shanghai earlier this year.

“The problem in China is finding the space, not the business,” said a Décathlon spokesman, who noted that plans for a store in Beijing were in the works.

But one of the challenges Décathlon faces is appealing to the teen market. To that end, it has been testing a new format, Decat, targeting 15- to 35-year-olds in city-center locations. The first bowed in Lille in 2002, with a second opening in Bordeaux a year later. Decat’s urban locations, boasting booming hip-hop tunes and flashy orange decor, hope to attract young shoppers by emphasizing popular sportswear and streetwear labels, a vast selection of footwear and the most innovative designs from Décathlon’s private labels.

Its women’s sales are also considered underdeveloped compared to rivals like Made in Sport and, in particular, Citadium, both owned by retail and luxury giant PPR. These retailers have put as much an emphasis on fashion as technical aspects of the product. To wit: more than 30 percent of Citadium’s sales are generated by women’s products, said Didier Lalance, general manager of the sports division at PPR.

“The women’s category should be explored further,” said Tribord’s Duprez.

To that end, Duprez added three stylists to Tribord’s design team, which now has 13 stylists and designers who work together to spot the latest trends in water sports equipment and apparel.

“They were out surfing on their lunch break,” said Duprez. “Can you think of a better spot for finding inspiration for new designs?”