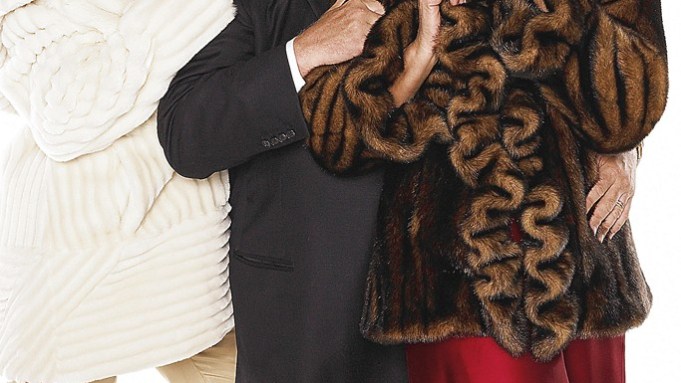 To say that Dennis Basso loves the limelight is an understatement.

The furrier and designer of drop-dead sexy red-carpet gowns has a flair for the dramatic, whether he’s telling a story or creating a furry confection with exotic pelts. It’s no wonder that 21 years ago he took to selling on QVC like a movie star takes to the Croisette in Cannes.

“I have a little inner desire and feeling for show business,” Basso said. “[QVC] has that show-biz situation. You get that adrenaline rush. You always get that little pumped-up feeling before a show.”

Basso has a lot of experience with television home shopping. “I have a 21-year following,” he said. “I’m never at a loss for words and I understand the customer.”

After more than two decades, Basso is still a bit in awe of the medium. “It’s like a live fashion show coming into your home,” the designer said. “[I love] the excitement of TV. The client totally relates to it. They [QVC] have been strong partners.”

And QVC shares the sentiment. “Dennis strongly resonates with customers,” said Doug Howe, executive vice president of merchandising, planning and sales at QVC. “In my mind, Dennis has a gift for understanding the customer. He can anticipate the questions. He’s very passionate and has a great amount of pride for the product. He’s very genuine, sincere and transparent.”

Basso is surprisingly egalitarian for a designer who works with wealthy women and actresses including Amanda Seyfried and Sharon Stone, and uses expensive and rarefied materials such as Barguzin sable, sapphire chinchilla and Russian broadtail and lynx to make coats with five- and six-figure price tags.

“The Dennis Basso luxury brand caters to a group of international women,” he said. “On QVC, we’re reaching nurses, school teachers and moms.” And Basso doesn’t discriminate when it comes to size. “For QVC, I do XX-small to 3X-large, about size 24 to 26. It’s very important to me to be able to accommodate a wide range of women. Just because a woman is extremely petite or full-figured doesn’t mean she shouldn’t shop with me. A woman shops with me because she wants to feel good.”

According to Howe, Basso was the first person to break $1 million in sales with a Today’s Special Value — an item chosen by the network to be promoted on a specific day, during a certain time period. Basso’s success was a faux fur zip-front hooded coat, presented during the midnight time slot.

Since then, he’s earned a place in the QVC Hall of Fame, having broken the $1 million mark in the midnight hour 19 times. Basso’s best selling item, a reversible-washable faux shearling hooded coat, sold 58,000 units when it premiered as a TSV on Dec. 13, 2003. It went on to become Basso’s most popular item with more than 157,000 units ordered.

Giving every woman a taste of luxury at an affordable price is Basso’s mission.

“I grew up an only child with very loving parents,” he said. “I’m a happy person. I wake up happy.”

And a good part of that joy comes from his QVC business, which now encompasses the home and ready-to-wear categories in addition to outerwear.

Basso continues to introduce more products and go deeper into certain areas, such as a complete rtw collection.

While Basso has a rapport with all the network’s hosts, one of his favorite on-air partners is Joan Rivers, who sells a jewelry collection. It’s hard to imagine two people as chatty as Basso and Rivers giving each other a second to get a pitch in, but Basso said it works.

“There’s no one-upmanship,” he explained. “We try to help sell each other’s products.”

When Basso began selling on QVC in 1993, he was a pioneer in the fashion industry. Few designers would venture to QVC’s West Chester, Pa., headquarters. “When I started, people thought it was an interesting move,” he said. “What caught me was the TV part. I don’t know if I would have created a line for a store selling a lower-priced collection. As it progressed, friends were mesmerized. ‘Is the counter real?’ It is. ‘Are the numbers real?’ Yes.”

Basso travels to West Chester two or three times a month to go on air.

“It feels like a second home,” said Basso, who always stays in the same suite at the local hotel.

Just then, an attractive young woman is ushered into Basso’s office by a sales associate, wearing a black Dennis Basso gown from the luxury collection. “She’s wearing our dress tomorrow to a Goldman Sachs dinner,” Basso said, sotto voce. “It’s $15,000.”

The irony is not lost on Basso. “Tonight, I’m headed to QVC and then tomorrow morning, I’m on air with a wonderful spring jacket that has a paisley lining and is machine washable. It’s great. I love it all.”