Hudson + Broad, a visual merchandising and branding firm, filed a lawsuit against the retailer in Manhattan’s U.S. District Court. 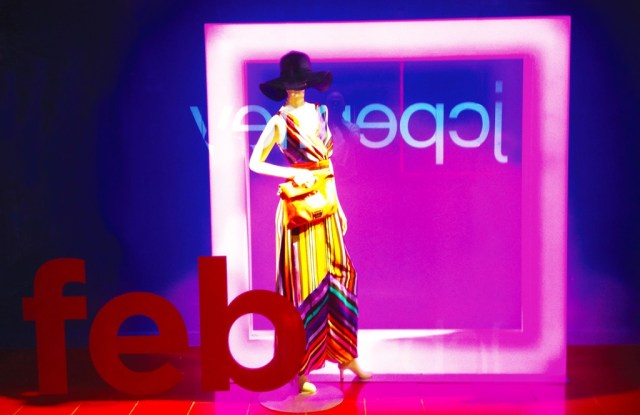 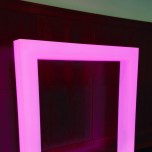 At issue is the oversize Plexiglas LED squares that Hudson + Broad designed as merchandise icons for Penney’s “Fair and Square” campaign. “Top level executives at J.C. Penney, including those who report directly to chief executive officer Ron Johnson, asked Hudson + Broad to develop a unique fixture with the promise that the proprietary product, if accepted, would only be ordered from Hudson + Broad and that the concept would not be misappropriated and bid out to other manufacturers,” said James Maharg, president of Hudson + Broad. “Yet J.C. Penney is doing exactly what it promised it would not do — which is a huge disappointment from a company claiming ‘Fair and Square’ as its image.”

Penney’s officials did not return calls seeking comment on the suit.

According to the lawsuit, Penney’s executives contacted Hudson + Broad in December to discuss the creation of an exclusive fixture that could be an iconic symbol for its stores. The fixture would need to change colors to match the retailer’s color of the month. Hudson + Broad developed a large LED square fixture with a remote control for changing color. Penney’s asked Hudson + Broad to deliver 1,800 units of the fixture. Company executives also installed it in the retailer’s Manhattan Mall store for Johnson’s Jan. 25 presentation of the new J.C. Penney “Fair and Square” initiative. Hudson + Broad was then asked to create a pair of fixtures that were installed outside the entrance to Johnson’s executive suite at Penney’s headquarters in Plano, Tex.

In February and March, the lawsuit alleged, Hudson + Broad planned the full rollout with Penney’s. According to the suit, on April 3, J.C. Penney’s procurement department told Hudson + Broad that the retailer had sourced the custom-designed proprietary fixtures elsewhere.

“We were shocked beyond belief,” said Maharg, noting that Hudson + Broad immediately reminded Penney’s that it would not authorize the retailer to have the fixture produced elsewhere. Since then, Maharg said, Penney’s executives have stopped all communication with Hudson + Broad.

The design firm said it will inform Ellen DeGeneres, Penney’s advertising spokeswoman, of the conflict. “We’re going to make sure that she’s aware of this complaint,” Maharg said. Still, Hudson + Broad wants to work with Penney’s again. “We definitely want an apology and we want to produce this order and work with them for many years to come,” Maharg said.

The complaint must be answered within 21 days.