In the past few years, Santa Barbara has seemed less like a resting place for surfers and retirees and more of a hot spot of fashion and design. The wind-swept city is home to no less than three collections — Karanina, Tamsen and Lucky... 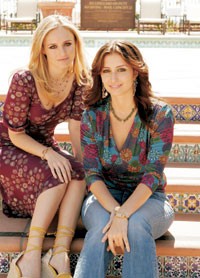 In the past few years, Santa Barbara has seemed less like a resting place for surfers and retirees and more of a hot spot of fashion and design. The wind-swept city is home to no less than three collections — Karanina, Tamsen and Lucky Brand.

Karanina
Designers Kara Smith and Nina Firestone have the answer for every girl who’s looking for cute, comfortable tops to pair with her jeans for day or night. With their interior design backgrounds and the help of a patternmaker friend, Smith and Firestone started the Karanina collection two years ago with fun tops in great prints. Since then, the line has grown into a full contemporary line of airy peasant skirts, flattering jersey wrap dresses and rich jacquard jackets. The feeling is bohemian, with mix-and-match prints and fabrics designed by the pair and made in Italy. They call Santa Barbara home and consider their travels a major inspiration for the line. The likes of Angelina Jolie, Mena Suvari and Alyssa Milano have picked up on that vibe and are Karanina fans.
— Monica Schweiger

Tamsen
Design inspiration comes in many forms. For Tamsen partners and longtime friends Mimi Wolf and Sue Firestone, it was the vivid graphic digital art of Sue’s father-in-law, Robert Firestone. (Nina Firestone of Karanina is Sue’s daughter.) Tamsen began as a personal project for interior designer Sue Firestone. A few years ago, she began experimenting with her father-in-law’s artwork by transferring some of his prints onto textiles, which she then fashioned into simple and elegant dresses and sarongs. Soon after, she partnered with fashion designer Wolfe to start the Tamsen collection. The customers for the line are women who, like Firestone and Wolfe, have a jet-set lifestyle and prefer eye-catching, effortless pieces that can go from a yacht to a black-tie affair (such as their best-selling, bold jersey dresses). With stores from California to Russia, these globe-trotting ladies have definitely found their niche in the luxury clothing market. Next up for Tamsen: bikinis.
— M.S.

Lucky Brand
Gene Montesano, co-owner and founder of Lucky Brand Jeans, has called the Santa Barbara area home for the past 10 years. He also owns several bars and restaurants in town, including the landmark Joe’s Bar, a charming watering hole from 1928. When not commuting to his L.A. office, Montesano spends his downtime watching the world go by at his restaurant, Bucatini, or, on a rare shopping trip, he can be found digging for vintage treasures at Yellowstone Vintage Clothing. When Montesano was asked about the fact that Santa Barbara has been attracting more and more Angelenos with its laid-back attitude and cosmopolitan culture, he replied, “L.A. people come up here, and the right ones stay.”
— Melissa Magsaysay