The nation’s largest maternitywear retailer has linked with the pregnancy guru from Bravo's show "Pregnant in Heels" for some celebrity appeal. 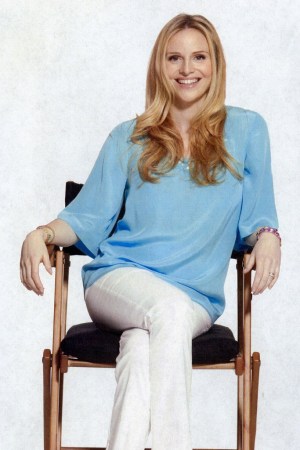 Destination Maternity Corp. has linked with Rosie Pope for some celebrity appeal.

Pope is the pregnancy guru with the Bravo show “Pregnant in Heels,” which addresses the trials and tribulations of pregnancy and tending to babies. Pope has two children, a third due May 14, and two weeks later launches her first capsule collection at A Pea in the Pod and Destination Maternity stores, both operated by the parent Destination Maternity Corp., the nation’s largest maternitywear retailer.

Pope also designs a maternity collection sold on her Web site and at the Rosie Pope Maternity store on Madison Avenue in Manhattan. She’ll open a second store Thursday on Montana Avenue in Santa Monica, Calif., and has plans for a third unit in Dallas later this year. “I like to pack in new launches all at once. I’m an extremely busy mom,” Pope said.

Recently, maternitywear has been hit by a recessionary double whammy — declining consumer spending and the nation’s lower birth rate. Destination Maternity’s net earnings in the first fiscal quarter ended Dec. 31 fell to $2.3 million, from $5.2 million in the year-ago period, and comparable-store sales were down 4.1 percent.

It doesn’t help that maternitywear, like plus sizes, isn’t regarded as haute fashion. It’s been fighting a stigma that’s perpetuated by the lack of designers with maternity labels.

“There is this notion that maternity is only worn for nine months, so why bother,” Pope explained. “We don’t see it like that, and I don’t think Destination Maternity sees it that way. Women wear maternity clothes for months after giving birth, and if you have one child, probably you are going to have more than one. Maternity clothes can be relevant for a number of years.”

“Births are down about 8 percent from three years ago, and in the first six months of 2011, births were down about 1.5 percent versus the prior year’s six months. That’s put some pressure on our demand,” said Destination Maternity’s chief executive officer Edward M. Krell. “However, we are going to be affected by the economy and how the consumer feels, just like other retail businesses.”

Despite the headwinds, Krell said profitability at the $545.4 million Destination Maternity has “dramatically” improved over the last three years, largely through cost controls and by opening larger-format Destination Maternity stores that sell A Pea in the Pod and Motherhood Maternity lines and enable the company to leverage real estate and operational costs over the bigger box. There are 30 of these “superstores” operating, averaging 6,300 square feet, compared to single-brand Motherhood Maternity or A Pea in the Pod stores at 1,800 to 2,000 square feet.

The company is seeking a bump in sales from Pope’s capsule collection, which will offer clothes designed to wear to work and into the evening. “It’s an easy-to-wear, luxurious collection that allows people to feel very good. They’re investment pieces — very versatile” with vivid colors, bold prints and a range from shirtdresses to classic baby-shower dresses, and embellishments reflecting trends from runway shows, Pope said. Each piece is designed to fit through the entire pregnancy, as the belly grows. Separates are priced from $85 to $125, while dresses are priced from $175 to $300. That’s comparable to the rest of the assortment in the stores. There are 18 pieces that will be sold online and at all A Pea in the Pod and Destination Maternity stores, or a total of about 120 doors. The collection is currently viewed as a one-season deal, selling for six to eight weeks.

“I try to [reflect] the fashion shows so people can keep their sense of style rather than looking different,” said Pope, who years ago worked as a sales consultant at A Pea in the Pod, marking the beginning of her career in the maternity business. “We’ve gotten a lot better making maternity. We celebrate the bump,” though some women, she acknowledged, prefer not to. “It’s an individual choice, but people are much more into celebrating the belly these days. At work sometimes, they’re more modest about it. But going out, on a date night or to a baby shower, women really want people to know they’re pregnant and that they’re proud of it.”

She’s also elevated the look by emphasizing tailoring, contrary to the popular notion that maternitywear must be about stretch, and has created classic jackets for the capsule collection.

Destination Maternity also has an ongoing collaboration with Heidi Klum and once did a collection with Nicole Richie, though the celebrity strategy is not necessarily ongoing. “It really depends if the right relationships are out there,” said Krell. However, celebrity tie-ins, he added, are a “natural” for Destination Maternity. “We dress celebrities that are pregnant. It’s not only about giving great fashion and looks that women are accustomed to before they became pregnant. It’s about doing it in a way that fits when she is pregnant and as her body changes throughout her pregnancy.”