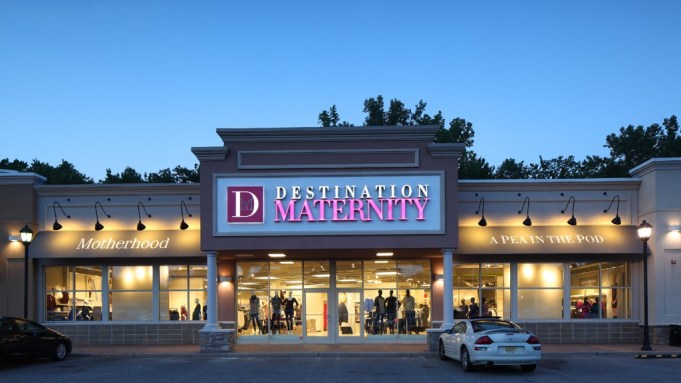 Destination Maternity Corp. is bullish on its superstores.

The $540 million maternity chain has 32 superstores operating, projects at least 50 in the U.S. and has just bred two prototypes. They’re not twins.

A 7,700-square-foot remodeled unit in Paramus, N.J., marked by a central “town square” for fitting rooms, a bra bar, checkout and a communal vibe, as well as a learning center for educational and fitness classes for expecting moms and new moms, marks its reopening Saturday. Located at 65 East Route 4 West, the store is four miles from Paramus Park Mall and close to the Garden State Plaza.

A 5,000-square-foot superstore, built from scratch, opened Aug. 29 in The Town Center of Virginia Beach, Va. It has a deconstructed “discovery” floor plan that is less directed compared with the usual racetrack layout and offers extensive premium denim and a designated space for nursing essentials.

“When a pregnant woman walks into one of our stores, she has so many different needs. For one thing, her clothes no longer fit. So the concept is to create a store environment that lets her see the breadth of assortment and the key fashion and key outfitting ideas,” said Ed Krell, the chief executive officer of Destination Maternity Corp.

“She’s really looking for information in addition to fashion,” said Chris Daniel, president, noting that many of his customers are women who are pregnant for the first time and shopping maternity for the first time. “We are trying to give her a style message, answer her questions and do it in a way that’s fun for her.”

The corporation is considered the largest maternity apparel retailer in the world. In addition to the Destination Maternity stores, averaging 4,150 square feet, the company operates Motherhood Maternity stores, averaging 1,800 square feet, and Pea in the Pod, at 2,000 square feet on average. The company has 605 retail stores and 1,298 leased shops. There are a total of 3,200 locations, including stores, leased shops and Kohl’s franchised locations.

The superstores range from 5,000 to 10,000 square feet, with the largest on Madison Avenue in New York, and sell merchandise from the Motherhood Maternity and Pea in the Pod trade names, as well as licensed designer and celebrity maternity collections, such as Jessica Simpson. From a price perspective, Motherhood is at the moderate end, Pea in the Pod has what’s described as contemporary pricing, while Pea in the Pod’s designer collections are the top of the range.

Every five to 10 years, specialty retailers tend to test a prototype format to update their fleets. Destination Maternity has taken the unusual approach of testing two at the same time. “One of the main reasons we did this is because we have stores of very different sizes in our overall portfolio. There may be different elements in these prototypes that work in different-sized stores,” Krell explained.

Testing new concepts and formats influences future design plans and remodels, whether it’s superstores or single brand units. But opening more superstores is a priority. “It’s much more efficient and cheaper to operate one larger store off the mall, than to operate multiple single-brand stores in malls with higher rents and common area maintenance costs,” Krell said.

In the Virginia Beach superstore, “there’s no clear beginning or end,” Daniel said, meaning shoppers can take different routes to explore the store. “You see all the denim, low- to high-priced, in a denim world, then you can move into an active world, then intimates and wear-to-work. The cash wrap is to the side, but customers can go whichever way they want. There are fewer straight lines.” The Paramus superstore, he added, is “a little bit more traditional, with its key center area.”

“This is not a typical chain,” said Kenneth Nisch, chairman of JGA, the retail design and brand strategy firm that worked on the new designs. “Destination Maternity is such a collection of stores. How many retailers would have a store on Madison Avenue and in Virginia Beach as well? It’s an eclectic real estate profile.”

While the two prototypes have merchandising and navigational differences, both are “very consumer-centric” from a standpoint of service, fitting rooms and including areas that help keep spouses and children occupied — play space, juice bars and seating areas with flat-screen TVs. Customer service has been beefed up for both superstores. “In many cases, it’s a new shopping experience for the customer, so giving advice is critical. They don’t have a lot of this product. They are looking to build a wardrobe across casual, weekend and workwear. That’s where selling assistance is critical,” Nisch said.

So is designing and constructing the store to meet the special needs of pregnant women. “The air conditioning and air flow have to be stepped up,” Nisch noted. “Our fitting rooms are 30 to 40 percent larger than typical fitting rooms,” with forms for the clothing so customers can get an idea on sizes and fits months later into their pregnancies. In addition, “The lighting on the mirrors [projects] forward, rather than overhead,” Nisch said. “That helps women see the garments better. There’s less shadow.”