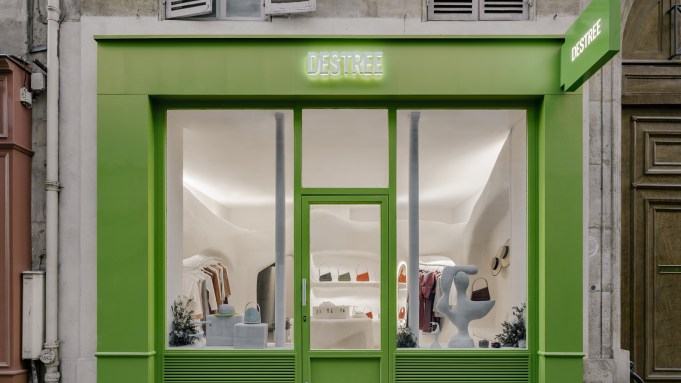 PARIS — Destree’s first freestanding boutique feels like walking into a sculpture, and it’s no wonder: buzzy Brooklyn-based ceramicist Simone Bodmer-Turner was commissioned to create the cave-like space with handbag shelves scooped out from the walls, as if clay was plucked by her fingers.

“We have an artistic approach to our products and our DNA, so we wanted the store to be in the same direction as everything we do,” said Destree cofounder Géraldine Guyot. “Simone imagined the whole store, and we gave her carte blanche.

“We really wanted it to be like a giant artwork, where products and clothes just happened to fit in,” she added, gesturing to the wavy rails on both sides of the room, and a hulking central table displaying jewelry.

Located at 3 Rue du 29 Juillet, the 500-square-foot store attracted a fair amount of walk-in traffic on a weekday afternoon as Guyot and her cofounder Laetitia Lumbroso put the finishing touches on the space — rearranging earring trees; changing a plug for a lamp — in time for an opening cocktail during couture week.

Guyot, who has parlayed her passion for modern and contemporary art into unique hats, handbags, jewelry and apparel, hunted down a contact for Bodmer-Turner through social media, obsessed with her amorphous forms executed in sand-rich clay and then painted white.

The Destree store is the artist’s first retail project.

A permanent Destree shop-in-shop at Le Bon Marché in Paris — done up in the brand’s signature anise green shade — opened almost simultaneously with the Paris boutique. “We’re already restocking and opened only three days ago,” Guyot said, also flicking through the photos on her phone to find Destree’s new shop-in-shop at Selfridges in London, which opened last month.

Guyot said Destree boutiques in China and Japan, to be operated by partners she and Lumbroso recently signed on, would be the next priority for retail expansion, with a New York City location also in the works.

Earlier this year, Destree completed a Series A funding round to almost double the size of its small team; open the brand’s first freestanding stores; expand into new or underdeveloped markets like the Middle East, China, Japan and the U.S., and supercharged e-commerce operations and digital-native marketing.

Guyot and Lumbroso retain majority control of the business, founded in 2016, as reported.

Guyot described heady times for Destree, enthusing that Beyoncé wore a bespoke hat design for the cover of her new single “Break My Soul.”

The brand also operates an e-store and boasts a wholesale network numbering about 80 stores. Marquee accounts include The Webster and Isetan.

Handbags — including hero styles like the Albert — rank as Destree’s biggest product category, with jewelry and ready to wear now vying for second place, and hats the smallest. In rtw, her hero product is the puff-sleeved Yoshitomo/Amoako suit, and the plan is to flesh out the apparel category.

The new Destree store is a stone’s throw from the Saint Laurent Rive Droite flagship on Rue Saint Honoré that used to be Colette, and among a clutch of trendy stores that include Danish brand Ganni, Golden Goose and Ole Lynggaard Copenhagen.

Guyot noted that bag displays would be changed daily, and monthly events would animate the space.

Why Do Women Entrepreneurs Have to Work Harder Than Men?