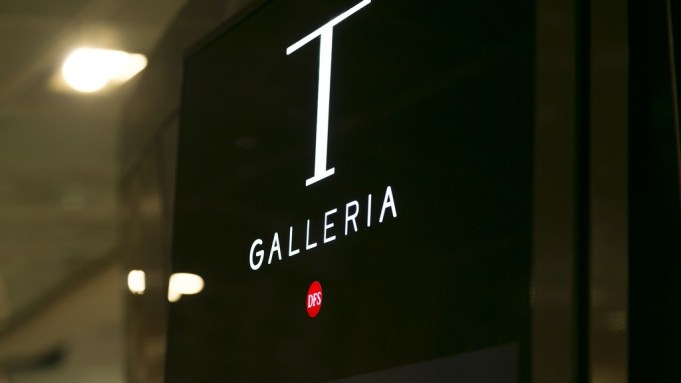 HONOLULU — The DFS Group has a new brand identity for its downtown locations that the travel retailer believes is on par with its luxury positioning.

On Saturday in Honolulu, the city where the first DFS shop outside an airport was opened 40 years ago, LVMH Moët Hennessy Louis Vuitton-owned DFS Group revealed those downtown locations that have been under the DFS Galleria nameplate will be now called T Galleria by DFS. With the T standing for “traveler,” the moniker is part of a marketing effort by Philippe Schaus, who became chairman and chief executive officer of the DFS Group in 2012. The goal is to put a spotlight on travel retail, and DFS in particular, as a powerful force in the business of global luxury, especially as Chinese tourists travel abroad in greater numbers.

“The stores have been upgraded, and we felt that the name DFS Galleria did not reflect that upgrading,” said Schaus. “It was necessary to name it for what we have become, a luxury shopping destination.”

The T Galleria name and an associated sleek “T” logo with a prominent, thick stem and thin, elongated arms, was created by an in-house marketing department led by DFS Group’s president of consumer marketing and branding Sibylle Scherer, who was formerly at the helm of strategic marketing at Escada. The branding exercise, which took around two years, had been on DFS’ agenda when Schaus arrived at the travel retailer as it sought to communicate its message more effectively across the world.

“That was one of the first projects that the shareholders asked me to really drive forward,” Schaus recounted. “So, we strengthened our marketing team. We didn’t have a real marketing team. There were marketing roles that were dispersed in the organization. One of the first things I did was to hire a head of marketing and put the marketing functions underneath that head. We started very seriously working on the process of rebranding the stores, understanding why we were doing it and defining what it could be.”

Although DFS considered numerous names, “T” appealed to Schaus and the team of DFS marketers because it’s simple, easily understood by potential travelers all over the world and visually commanding. DFS is staying as part of the new moniker with the words “by DFS” to validate it and the logo for loyal shoppers who trust the brand and recognize it for its historic initials. But Schaus added that he hopes the updated name will distinguish the T Galleria stores from other stores both in the travel and nontravel sectors using the terms “duty-free” or “galleria,” or terms like them.

“We take away a little bit of the confusion that might have existed, and we have a name that is a lot easier to remember and to translate,” said Schaus. “The impact will not be so much on the product side because we already upgraded the product offering and the re-brand will not change that strategy. On the operational side of the stores, it also won’t have much impact.…Where there is really going to be a difference is on the marketing and communication side because this allows us to communicate in a much clearer way without confusion about who we are. We are a great luxury destination for travelers and will build brand equity around that.”

In the early years of the DFS Group, which was founded by Robert Miller and Charles Feeney in 1960 and was acquired by LVMH in 1996 when Feeney sold his interest, downtown stores started as satellites to DFS’ principal focus of developing airport locations. “The whole idea with downtown stores originally was that people, when they were in the airport, they were in a hurry, and there wasn’t enough space in the airport. It was all about checking in, getting boarding passes, doing some quick purchases. The idea was that they were spending much more time in town. They could have a place where they could discover the product offerings, make preselections to buy there and then get it delivered at the airport,” explained Schaus.

As time passed, the Galleria stores became comparable to luxury department stores rather than being mere satellites of airport units. For instance, the three-level, 210,000-square-foot T Galleria in Honolulu’s Waikiki neighborhood showcases more than 140 brands, including roughly 27 watch brands and 60 beauty brands, many of them in prominent individual store formats that are tailored to a brand’s look and feel. There are 470 multilingual employees in the store speaking Japanese, Mandarin, Cantonese and Korean.

There are 14 T Galleria locations worldwide and 420 total DFS locations on three continents. In 2012, some 211 million people went through DFS’ doors, where 700 brands are sold, and there are 420 branded boutique stores. While they were there, customers purchased 70 million products, including 3.5 million bottles of perfume, 2 million lipsticks, 1.5 million handbags and 350,000 sunglasses.

Talking specifically about the T Galleria store in Waikiki over the last five years, Harold Brooks, president of global merchandising for the DFS Group, said, “The brand portfolio has been expanded. As you walk through the store today, you will see Loewe, you see Céline, you see Chloé, you see Ermenegildo Zegna. Those brands were not part of the mix five years ago. If you walk through the beauty floor, the extensive brand portfolio and lineup today is completely different from what you would have seen five years ago. Most recently, we opened Tom Ford in what is the first travel retail installation for Tom Ford anywhere in the world.”

Most of the T Galleria business now isn’t duty free, and shoppers are spending more time at those locations and more money than they do at airport units. “In our Hong Kong and Macau Gallerias, we are selling at the same price as the rest of the market because Hong Kong and Macau are tax free. The value proposition is not about price there, at least not compared to other retailers. Here in Hawaii, we have a mixed model where we have the upper floor which is duty free with delivery at the airport, but the ground and first floors are not duty free,” said Schaus. “There are other locations where everything is duty free. The whole model has evolved. It is no longer just one model where it is duty free, and you pick it up at the airport.”

The changes to the T Galleria locations, as well as at the airport locations, are being made with an eye toward the Chinese traveler, which the DFS Group is banking on to drive the growth of sales in the luxury travel retail sector. There are those who think China’s strength could be waning, but Schaus and his colleagues at DFS are not among them. “There is skepticism because it has grown so much already. People tend to think that maybe that’s the end of the story. The growth isn’t linear. People have seen in the last few months a little bit of a slowdown of the growth rates in China, and they interpret that as maybe there is a saturation of the Chinese market. Our view is that is not the case. There are so many more people who are going to come on the market to travel and to shop when they travel that we believe that we are in for further enormous growth over the next years,” said Schaus.

In a presentation to 100 of its brand partners, the DFS Group laid out the case for its confidence in the Chinese tourist by underscoring that urbanization and the burgeoning middle class will foster a larger appetite for travel in Chinese citizens. In fact, Lamonte James Beighley, executive vice president for strategy and market development at the DFS Group, pointed out that DFS has identified “urban expenditure” by Chinese people as the primary predictor of whether they will travel abroad and that expenditure is sure to mount as Chinese cities balloon. The retailer forecasts that, in 2020, the number of Chinese outbound travelers will be 175 million, up from 80 million last year. It also pointed out that the United Nations World Tourism Organization has found that $102 billion was spent by the Chinese on international tourism in 2012, 65 percent of which was related to shopping. About 40 percent of Chinese spending on luxury goods is done overseas, according to Bain & Co.

As DFS ponders how to capitalize on Chinese travelers’ desire for luxury goods — and a similar desire from the citizens of emerging Southeast Asian countries, from which DFS estimates there will be 75 million new international travelers in the next decade or so — it is concentrating on expanding many of its current T Galleria stores and zeroing in on cities where the Chinese might want to travel to possibly open T Galleria locations down the line. DFS has already invested several hundred million dollars over the past few years in renovating the downtown stores.

“At any point of time now, we are working on expanding most of our Galleria stores in some way,” said Schaus. “We have embarked on a big renovation and expansion project at our store in Bali. Bali is going to become a very big destination for PRC customers, among others, so we are expanding and upgrading our Bali store. We have also embarked on redoing our store in Sydney.”