After three decades in the jewelry and watch business, Benny Shabtai is only getting started. 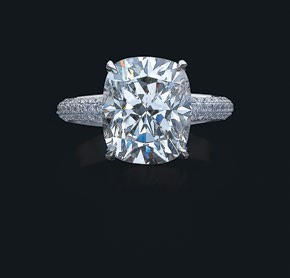 After three decades in the jewelry and watch business, Benny Shabtai is only getting started.

Shabtai, who founded Raymond Weil USA in 1977, staked his claim in designer fine jewelry in 2001 in cofounding Di Modolo with the Swiss-born Dino Modolo, who was trained in watchmaking as a young man in La Chaux-de-Fonds.

The line is rife with gold, diamond and colored gemstone jewelry and is distributed in Di Modolo’s three stores in New York, Short Hills, N.J., and Milan, as well as Neiman Marcus and other specialty stores. Now the company is gearing up for phase two.

First up, the brand has launched a watch collection. Called Tempia, it features a rounded tonneau case with a delicate bracelet and comes with options of diamonds and gemstones.

“We first wanted to be known as jewelers,” Shabtai said. “We feel it’s now time to bring timepieces in with the feel of jewelry.”

The watches recently hit the company’s boutiques and Shabtai said the consumer response has been strong. The Swiss-made collection retails for $12,500 to $50,000 and is only available in gold, with versions in stainless steel to bow next year. The company has plans for wholesale distribution.

The launch comes at a time when the thirst for luxury watches has been skyrocketing and jewelry brands are trying to cash in. Earlier this month, Tiffany & Co. unveiled a joint venture with Swatch Group to grow and build its fine watch business. Diamond jewelry firm De Beers also recently introduced a collection of diamond-encrusted watches that are untraditional in that they include rough diamonds and have oblique case shapes.

“It’s a challenge,” Shabtai said. “There are so many name brands in the marketplace at the end of the day it’s really about ‘Who are you?'”

In keeping with another movement in the jewelry industry, Di Modolo has launched a high jewelry collection. Shabtai teamed up with DD Manufacturing, an Antwerp, Belgium-based diamond manufacturer and Diamond Trading Co. siteholder that supplies him with diamonds from 3 to 30 carats and above. Each piece is one of a kind and can go from $50,000 up to the millions of dollars. DDM also supplies Daniel K and Jacob & Co. with diamonds.

“Inventory will be my advantage,” said Shabtai. “I don’t think anyone is going to be knocking down my door asking for diamonds. No matter what, it will take time. Diamonds are a commodity…it’s an investment.”

Di Modolo is placing its diamonds in good — if not competitive — company. It’s moving into a quainter 700-square-foot store at 703 Madison Avenue in Manhattan in March, with neighbors like Chopard, Leviev, Graff, de Grisogono, Kwiat and Ivanka Trump, and will shutter its store at 635 Madison Avenue. The new Madison Avenue store is expected to do $15 million in retail sales in its first year.

“Madison Avenue has become the heart of brand names,” Shabtai said. “The image and prestige of moving two or three blocks [uptown] makes a difference.”

The brand is also strategizing an aggressive retail rollout, opening up to 15 doors within the next five years. Las Vegas, Costa Mesa, Calif., and Moscow are on the horizon.

Another move to glamorize Di Modolo was tapping Catherine Zeta-Jones as its brand ambassador. Zeta-Jones is featured in the company’s print campaign that bowed in this month’s issues of Departures, Vogue, W and Town & Country.