The private label is the retailer's first men's brand to have its own dedicated e-commerce site and platform.

The VRST line includes both performance and lifestyle options.

Dick’s Sporting Goods has added another private brand to its arsenal.

On Tuesday, the Pittsburgh-based sporting goods retailer introduced VRST, a men’s activewear collection that is being rolled out to more than 400 of its stores over the next few weeks, where it will be prominently displayed along with signage and photography.

Although Dick’s has other private men’s brands, this is only the second one — and the first men’s label — to have its own e-commerce site and digital platform, joining Calia by Carrie Underwood, a women’s activewear collection fronted by the country music star.

Key pieces of the apparel line, which is pronounced verst, include a variety of commuter pants, joggers and shorts along with T-shirts, hooded sweatshirts and quarter-zips. VRST items range in price from $30 to $120, and the brand offers multiple inseam and waist size options outside of standard sizes (small to XXL).

“The VRST line leverages our expertise in athletic apparel, technology and the in-house design capabilities we have been building over several years,” said Nina Barjesteh, senior vice president of product development for Dick’s. “VRST not only offers sophisticated performance apparel for running and training, but also comfortable, stylish pieces with premium fabrication that can be worn around town, out with friends or while working or working out at home.”

Barjesteh said VRST is the first athletic and activewear line exclusively designed for men at Dick’s. She said the assortment is designed to allow guys to “run, train and commute in style. VRST offers an assortment of products in apparel categories including: run and premium run collections, training collections, lifestyle pants and tops, as well as rest and recovery.”

She continued: “Within the past few years, we’ve seen increased growth in the men’s fitness and activewear category, which was only accelerated during the pandemic. We see a clear demand for versatile apparel built for working out, working from home and commuting, with comfort in mind. It’s an opportunity for us to better serve men who may already be shopping with us, while also attracting new customers.” 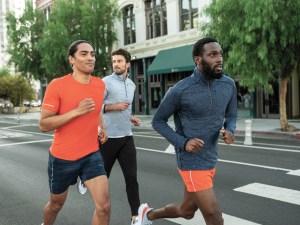 VRST will roll out to 400 Dick’s stores in the next few weeks.

The decision was made for VRST to have its own dedicated e-commerce site because it’s a brand “that has its own identity and we believe it deserves its own moment and platform.” Going forward, VRST will leverage a number of marketing channels including brand ambassadors “who are well respected as workout enthusiasts and for their forward-thinking style” to promote the collection.

Although she declined to say how large Dick’s private label penetration is, she said the company has “seen great success with our other Dick’s vertical brands, such as Calia by Carrie Underwood and DSG.”

Dick’s has been the beneficiary of the surge in the popularity of workout apparel and equipment since the start of the pandemic. In an investors’ presentation earlier this month, the country’s largest sporting goods retailer, which operates more than 700 Dick’s stores in 47 states, said it holds a 7 percent market share of the $120 billion market. It also owns Golf Galaxy and Field & Stream stores.

That being said, the company is projecting a bit of a slowdown this year. Fiscal 2021 sales are estimated to be $9.5 billion to $9.9 billion with same-store sales down 2 percent to up 2 percent and adjusted earnings of $4.40 to $5.20 a share.