The locations were installed in Lombard, Ill., near Chicago; Cranberry, Pa., near Pittsburgh, and West Nyack, N.Y. in time for Black Friday. 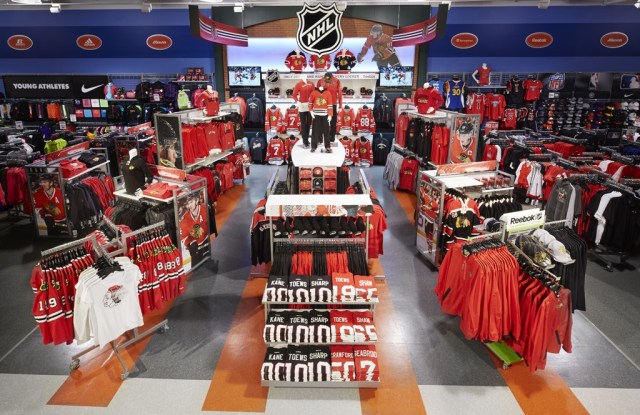 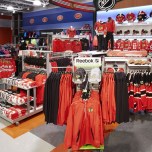 Dick’s Sporting Goods and the National Hockey League have teamed up to open NHL Super Shops in three hockey-crazed cities around the country.

The shops, which measure about 400 square feet, were installed in Lombard, Ill., near Chicago; Cranberry, Pa., near Pittsburgh, and West Nyack, N.Y., in the suburbs of New York City, in time for Black Friday. If the shops are successful, the concept is expected to be rolled out further for next year.

Brian Jennings, NHL’s chief marketing officer, said these markets were chosen because they’re “strong hockey markets and the formatting of the stores worked.”

Jennings said the NHL has had a long, successful relationship with Dick’s and the idea of a Super Shop came about after a conversation with Dick’s president Joseph Schmidt. “He was visiting our New York City store and said he loved the shop, the environment and the multisensory experience,” he said. Schmidt suggested partnering on similar shops within Dick’s stores in select cities, and the puck was dropped.

Other cutting-edge brands such as Adidas and Under Armour also have multisensory shops within Dick’s, but this is the first for a major sports league, said Daniel Near, NHL director of consumer products licensing. He added that there is “potential to roll [the shop concept] out for fall ’14.”

Jennings said even though Dick’s stores can be as large as 75,000 square feet, the environment that has been created make the shops “feel like stand-alone specialty stores.”

The shops carry merchandise for the upcoming NHL Stadium Series, four regular-season games planned for outdoor locations. Those include two games at Yankee Stadium in January and another at Soldier Field in Chicago between the Pittsburgh Penguins and the Chicago Blackhawks, hence the decision to install the shops near those cities.

Near said the shops offer apparel, jerseys, headwear, outerwear and accessories for men, women and children and are heavily skewed toward more premium product such as the Authentics line from Reebok. “The higher-priced, aspirational merchandise is an especially strong piece for Dick’s,” he said. There is also an assortment of more-moderate priced hoodies, track jackets and T-shirts, he noted.

Dave Natale, director of sports and event marketing for Dick’s, said the NHL has been a “long-standing, great partner” which works diligently to “identify opportunities to grow the business.” He said that it’s “too early” to gauge the sales performance of the shops, but colloquial results over the holiday weekend indicate “a lot of excitement and positive feedback from customers” who appreciate how the shops bring the assortment to life. He said that the retailer will evaluate the numbers over the holiday and then revisit the plan to add the shops to other stores. More than 230 Dick’s stores in the U.S. carry NHL-licensed merchandise.

Jennings said the Super Shop concept may be installed at other retailers as well in the future. “We would look at strategically aligned retailers with a shared vision of product and best practices,” he said. “If there is a retailer with the same eagerness as Dick’s, we would look to offer a differentiated experience, not just mimic what we have here.”