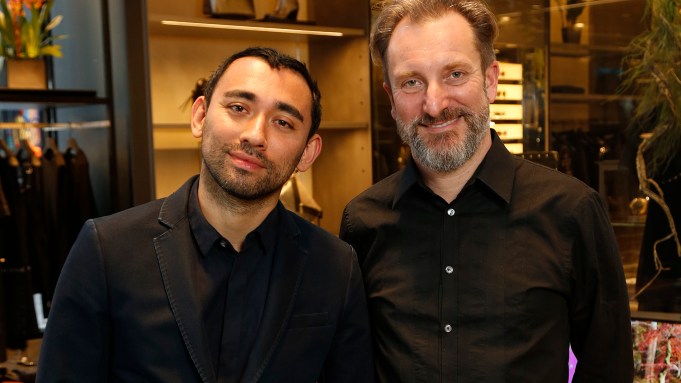 Last Friday, as the rest of the industry scrambled for holiday shoppers with doorbusters and cyber deals, Diesel discreetly opened its shop at 625 Madison Avenue on the southeast corner of 59th Street, though there is nothing subdued about the exterior. It’s a photo catalytic, self-cleaning, three-dimensional cement facade that recalls the signature V-pattern stitching on the back pockets of Diesel jeans.

Equally detached from the industry cacophony was the soft opening of another Diesel store last Friday, a 2,700-square-foot boutique on the second level of The Shops at Columbus Circle, on Manhattan’s West Side.

Diesel — the 38-year-old, $1 billion fashion brand that’s rooted in innovative denim, leather embellished with studs, safety pins and zippers and a punk rock aura — is honing its niche. It’s about “rebooting” the brand not re-engineering its DNA, and about being high-end and edgy, without the pretensions of luxury. “We want to be the coolest among the biggest brands — not the biggest brand,” Bogliolo said.

“We don’t want to be too influenced by fashion trends. We’ll acknowledge them, but we do our own thing,” added Nicola Formichetti, Diesel’s artistic director. “We never do clean and simple. There is always a detail. Even with our high heels, there is some toughness to it. There is something that makes it very Diesel — metal hardware, leather, denim, sparkle.”

Formichetti and Bogliolo, who have each worked at Diesel for the past two years, are being interviewed together for the first time. So what better setting than the new Madison Avenue store. It’s a relatively small space — 2,800 square feet for selling — yet it qualifies as the flagship and not merely because of the prominent location. The unit represents the first leg of a multiyear journey to revamp Diesel’s network of retail stores for greater sophistication and intimacy, and to elevate the brand image and product. One hundred twenty locations are expected to incorporate the design concept in the next three years. Of those, 100 will be refitted to the format or relocated to the format, and 20 to 25 new stores, primarily in China and Japan, will open with the interior design. The company is also planning to renovate its Milan flagship, the biggest store in the chain, to incorporate exhibition space, food, beverages and other concepts.

“It will be experiential for sure,” said Formichetti.

Diesel has a total of 400 stores, including 200 directly owned and 200 operated through third parties. The company also operates a Web site, which accounts for just under 10 percent of the volume. Asked how fast Diesel wants to grow under its new strategy, Bogliolo replied, “We want solid, steady growth. I don’t want to commit to any numbers.”

Diesel is part of Renzo Rosso’s $1.6 billion OTB, which also owns Maison Margiela, Marni, Brave Kid, Viktor & Rolf and Staff International. In addition to its retail initiative, Diesel underwent a significant downsizing of wholesale distribution. “Earlier this year, we talked about cutting the wholesale — how we were cleaning up the business. Now it’s about building up the brand,” said Bogliolo.

He cited a five-year stretch where the company got too commercial, rolling out products and retail locations that “were not upscale enough….We had to eliminate about 18 to 20 percent of the wholesale business, or 85 million euros [$90.2 million] around the world. It was very painful.” Diesel is currently sold at Saks Fifth Avenue, Bloomingdale’s and Macy’s, among other stores.

With the retail initiative, “New York is our first chapter. This is where we can project our plan for the future,” said Bogliolo, who joined Diesel in 2013 after working at Bulgari and Sephora. “We are taking the brand in a more premium direction, exactly back to its origins.”

“Madison Avenue represents our new direction to do something more intimate, rather than another big blockbuster store,” said Formichetti, who also joined Diesel in 2013, after working at Thierry Mugler and earlier as Lady Gaga’s stylist. “We wanted a store that’s homey with a more personal environment, something more elevated. We want customers to experience the product more.”

For the store design, Formichetti collaborated with architect Masamichi Katayama and his Tokyo-based firm Wonderwall. The store sells the full men’s and women’s Diesel collections of outerwear, shirting, pants, dresses, jackets, footwear, underwear, handbags, eyewear, fragrance and timepieces, and has an interior marked by wood-paneled ceilings, antique furniture, Persian area rugs, brushed steel fixtures, an infinity mirror by the fitting rooms and other oversize mirrors. The 22-foot-high windows in the front let natural light in, and there are high-definition screens that display custom digital artwork depicting nature from the artist collective Field.

The store is easy to shop and simply organized in the guise of an apartment. The “foyer” houses the Diesel Black Gold collection designed by Andreas Melbostad. The “living room” houses the Diesel collection. “Interiors are successful when you feel comfortable,” said Formichetti.

The executives half-jokingly refer to the jeans area as the “denim temple.” The 200-square-foot space is fronted by a glass-enclosed showcase for the “jogg jeans,” which are a blend of jersey and denim for extra comfort; bears a look inspired by a wine cellar, and has wide, pull-out drawers for associates to display jeans as they explain the characteristics to shoppers. “Denim is one of the most difficult purchases for consumers,” said Bogliolo, citing what could be to some a confusing array of fits, fabrics and washes. Of the store’s 14 associates, half are denim specialists. “It’s really an opportunity to get personalized service.”

Over the past year, Diesel closed its Fifth Avenue location, which had 15,000 square feet and an outdated decor, as well as its Lexington Avenue store, replacing them with the scaled-down Madison Avenue and Columbus Circle units. The SoHo store was updated.

By relocating to Madison Avenue, the attempt is to refine the brand’s image, capture a fashion-forward audience and distance Diesel from the masses that traipse Fifth and Lexington Avenues. “Fifth Avenue became more mainstream,” Bogliolo noted. “We used to be next to Fendi there. Now there’s a Microsoft.”