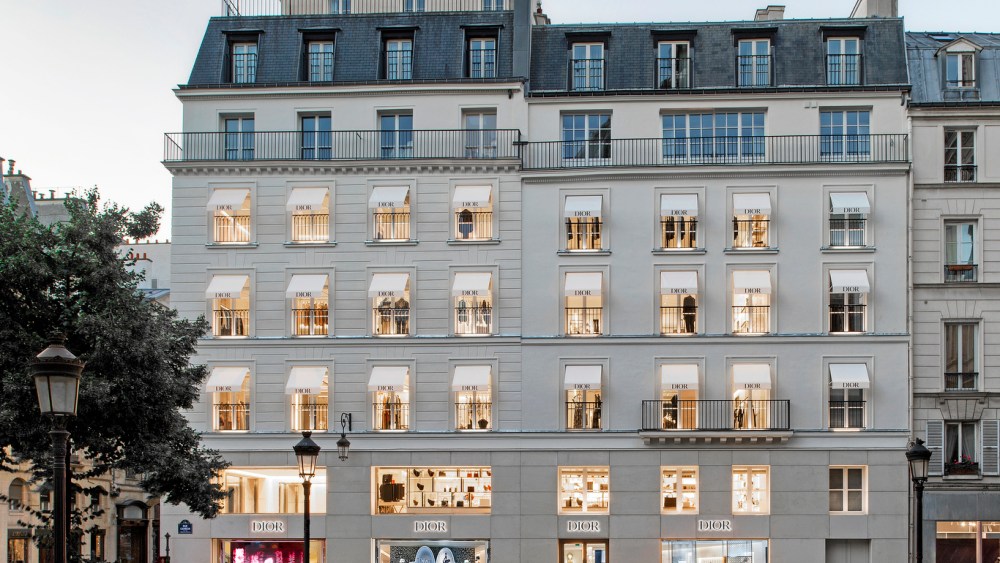 With its small, interior garden, framed photos dotting the walls, vintage furniture and views of the Notre-Dame-de-l’Assomption church, Dior’s new five-story flagship at 261 Rue Saint-Honoré has the grandeur — and intimacy — of a Parisian apartment.

The boutique, which opened to the public on July 4 after a dedicated day for VIP clients, is five times bigger than the store it replaces just down the street — a major statement about the brand’s momentum, ambitions and long-term view.

During a walk-through of the store on Thursday, Pietro Beccari, president and chief executive officer of Christian Dior Couture, drew a parallel to the founder.

“Mr. Dior had the courage to launch his brand right after the war, an act of rebellion against the dark times,” he related. “And I think I can say we are sufficiently resistant in this crisis to be optimistic about the future.”

The executive acknowledged that he had to reduce his initial projections for the mega-store, given the absence of tourists in the French capital amid the coronavirus pandemic. He declined to pinpoint how much of Dior’s Paris sales depend on tourists.

“But we didn’t build this store for the next one year; we built it for the next 20 years,” Beccari said, seated in one of the living room-like settings that dot the vast store. “We are not very hopeful that we will have lots of tourists until next year. So with less tourism, we have the chance and the duty to better take care of locals.”

Thanks to its corner location, the store is flooded with natural light, and affords views of what is known locally as the Polish church, capped by a magnificent cupola and fronted by a charming square.

There is also much to please the eye inside the boutique, done up in creamy shades echoing the pale stone of the facade. Architect Peter Marino employed a range of subtle textures and effects: some walls shimmering with faded floral motifs; others dressed in mottled plaster, or muted toile de Jouy wallpaper. Area rugs — in shaggy, tonal checks on the women’s floors; in denim shades and watery patterns for the men’s areas — heighten the residential feel.

Groovy mid-century armchairs, stools and daybeds mingle with custom tables, some in leaf shapes, and many in bronze, a fetish material for Marino.

Yet nothing is overly showy. There are artworks throughout the store, mainly photographs, but no gobsmacking sculptures or video installations.

Instead, the boutique exalts the merchandising muscle of its women’s and men’s creative directors — Maria Grazia Chiuri and Kim Jones. During the tour, Beccari accentuated areas on the women’s floor dedicated to fashion jewelry and hats, two burgeoning categories that are capturing new clients, and two new handbags debuting at the store: the Saint-Honoré and the Bobby. (They will reach other stores in Dior’s global network on July 11; the Bobby already pre-launched in China.) Dior Around the World and Dioriviera capsule collections are also being sold at the Saint-Honoré boutique first.

Visitors to the first men’s floor alight on vivid logo EarPod cases and sweaters with a Miami vibe, the fruit of a mind meld between Jones and Shawn Stussy, while the second floor has more elegant, formal airs for the tailoring on offer, including a demi-mesure service.

“I believe the product is king, and when we discussed this store with Peter and Maria Grazia, we wanted to make our product stand out as the real hero,” Beccari said. “A more neutral background allows us to do that.”

Not that the store is plain. “I think it’s warm, inviting and there’s a certain joyfulness,” Beccari said. “I think we’re at the summit of chic.”

Marino said his goal was to “simplify the backdrop” for Dior’s multiple creative voices, and to bring in lots of natural light. He began experimenting with a bright, mostly white palette at Dior boutiques in Monaco and Munich, and this one represent the latest iteration.

Fine jewelry by Victoire de Castellane is showcased in two rooms, with the most spectacular pieces displayed in a glass case lined with miniature couture toiles, all in white.

“It’s like a town house,” said Marino, who demolished the grand staircase erected by the previous retail tenant, Roberto Cavalli, preferring the tightly coiled charm of the original stone one residents would have used in the 18th century.

He’s particularly proud of the garden, partly vertical, that punctuates the top three floors, noting he’s as “obsessed” with gardens as Monsieur Dior was, and happy to clear off “roofs full of air conditioners.”

On offer throughout the 10,000-square-foot store are fall 2020 collections, with spacious salons for ready-to-wear and other rooms, nooks or walls for handbags, shoes, eyewear, fragrances and small leather goods.

Clients can also choose from an array of handbags, totes, shoes, sneakers, scarves and small leather goods that can be personalized with initials on site in about 30 minutes. Leather tote bags and suitcases require special techniques and are personalized by special order.

The flagship adds further heat to the Rue Saint-Honoré, and ratchets up the rivalry with Chanel, whose Rue Cambon flagship was vastly expanded and reopened in 2018 with frontage on the happening street, putting it cater-corner with Dior’s new edifice.

Earlier this year, a Cushman & Wakefield report anointed the Rue Saint-Honoré as the hottest strip in the French capital for luxury shoppers in terms of store openings last year, accounting for nearly half of the city’s transactions.

Beccari cited the arrival of Louis Vuitton on the street — that boutique extends to the prestigious Place Vendôme — and it is also home to Buccellati and Graff, as well as fashion brands including Balenciaga, Miu Miu and Saint Laurent.

“Dior as a French brand deserves to have a good presence and I believe it’s one of the best corners on the street,” he noted.

The smaller Dior store at 384-386 Rue Saint-Honoré, a stone’s throw away from the new behemoth, is to be taken over by Loewe which, like Dior, is part of LVMH Moët Hennessy Louis Vuitton. The Spanish brand is targeting a November opening.

Beccari brushed off concerns that the parallel Rue de Rivoli, a main artery now reserved only for buses and cyclists, might reduce footfall, noting that the particular appeal of the Rue Saint-Honoré is its neighborhood feel, with many eateries nearby and apartments above the luxury storefronts.

The store opening kicks off an exceptionally active moment for Dior, which will unveil new couture and men’s collections over the next eight days, plus Chiuri’s cruise collection in Lecce, Italy, on July 22 — not forgetting the deafening noise around the Air Jordan 1 OG Dior limited-edition sneaker drop this month, alongside a capsule collection of rtw and accessories.

Marino’s next big project for Dior is the Avenue Montaigne flagship, slated to open in late 2021. It’ll be the third time the American architect has overhauled the French brand’s historic boutique.

He noted gleefully that there was one room at the Rue Saint-Honoré store he couldn’t touch: a panelled salon at the front of the store that is listed. The off-white coloration also had to stay like that during the days when Cavalli had dark brown walls and animal-print sofas.