The raven-haired seductress will bring her brand of sexiness to the Bloomingdale’s flagship March 15 with a signature collection of intimate apparel. 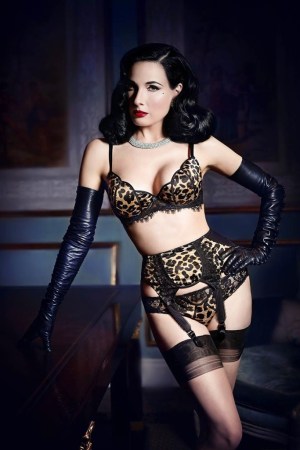 Bloomingdale’s and Dita Von Teese are tying the lingerie knot.

This story first appeared in the February 8, 2014 issue of WWD. Subscribe Today.

The raven-haired seductress — a former fetish-model-turned-burlesque-queen in Europe and the U.S. — will bring her brand of sexiness to the Bloomingdale’s flagship March 15 with a signature collection of intimate apparel.

This will mark Von Teese’s first premium lingerie label for the U.S. market. In addition to the 59th Street flagship, the collection will also be launched exclusively on Bloomingdales.com as well as at five top doors: the trendy SoHo unit in Manhattan; Aventura, Fla.; White Plains, N.Y., and two stores in California — San Francisco and Century City in Los Angeles.

“It’s so very exciting to be doing this with Bloomingdale’s, because I have a fascination with lingerie and my first job was in a lingerie store. I later created sexy-looking pinups and began collecting vintage lingerie. That’s what sparked my career,” said Von Teese, who will host an in-store appearance at the flagship March 20.

Von Teese made a point of saying she believes women should wear lingerie for themselves, not others.

“I don’t put lingerie on for someone else. I put it on because it makes me feel good and ladylike. Even as a little girl it made me feel like a lady…. I’m trying to change women’s lives and their point of view about lingerie because the lines of what’s sexy and what’s not sexy have been blurred…. Why would a woman wait for a special occasion to wear her nicest things? I want to give women accessible glamour with my lingerie collection,” Von Teese said.

She added that she will oversee a social-media campaign to market the launch.

“I do all of my social media myself because I like to do it naturally. I have more than 1.5 million followers on Twitter, and went from zero to 115,000 followers on Instagram in one month. Instagram was very nice to me because someone had been using my name, and they gave my name back to me,” said Von Teese.

As part of the launch, Von Teese will meet with Bloomingdale’s sales staff to instruct them on historical inspirations for the collection, while images of her wearing a number of the line’s sultry looks will be featured in point-of-sale materials. A key item from the collection will also appear on the cover of Bloomingdale’s Intimates catalogue for spring.

Von Teese’s obsession with lingerie, particularly upscale vintage pieces from the Thirties, Forties and Fifties, make up the lion’s share of her collection. The Bloomingdale’s launch will include key vintage-inspired pieces in several groups, among them a very feminine Parisienne group, leopard-print undergarments in a range called Tulip (the bra cup resembles a tulip) and a daring “Madame X” vignette of items that were prominently featured in the Alexis Mabille show during Paris Fashion Week. Other groups include Savoir Faire, Her Sexellency, Sheer Witchery and Man Catcher.

Special treatments include miniature cameos, tassels, little velvet bows and high-end European laces with floral patterns and fluttery eyelash-lace effects. Suggested retail will average $65 to $100 for bras, $25 to $55 for undies and $400 for a full slip that doubles as a dress.

Francine Klein, Bloomingdale’s executive vice president and general merchandising manager of intimate apparel, fashion accessories, cosmetics and fine jewelry, described the union with Von Teese this way: “It is part of the Bloomingdale’s DNA to merge pop culture with fashion, so we are excited to offer our loyal customers the first opportunity to shop Dita Von Teese’s lingerie collection in the U.S.”

The premium collection, which has generated wholesale sales of $10 million in the global market since 2012, is produced by Australia-based DCI Corp., a 42-year-old intimate apparel firm. Bloomingdale’s has a six-month exclusive for the U.S. launch, and distribution will be expanded to include other retail channels for the second season, said Christopher West, managing director of Marvin Traub Associates, a global business development and strategy firm that put together the deal with Bloomingdale’s. The wholesale sales projection for the U.S. launch the first full year is $10 million, he said.

As for events Von Teese will be going to during New York Fashion Week, among them will be the Carolina Herrera show.

“I’ve been wearing a lot of Carolina lately…. But it’s so cold here, I may have to layer on some furry lingerie,” Von Teese said.