As retailers' efforts to relocate sourcing out of China escalate, so do concerns over product shortages and delays in the supply chain.

Vietnam factories as primary alternatives to sourcing out of China.

Retailers, consumed by the threat of increased tariffs on Chinese goods, have publicly underscored the need to relocate sourcing from China to Vietnam, Myanmar, Bangladesh, Sri Lanka, Cambodia and other countries.

“This is a very complicated situation,” said Terry Lundgren, the former chairman and chief executive officer of Macy’s Inc., referring to retailers, generally. “It’s not easy to shift. It’s about establishing relationships and building trust and loyalty. You need to set up inspection offices with people inspecting merchandise production frequently and unscheduled. You need people to see that the products are being made properly with the right fabrics. You need to see that labor laws are being adhered to, and that standards of cleanliness are upheld. Going from one country to another, you have to relearn all this.

“There could be some disruption of flow, particularly in categories like moderately priced sweaters and shoes, where China has such a large share of worldwide production.”

The U.S. government has tacked tariffs on $250 billion worth of Chinese goods and President Donald Trump might impose 25 percent duties on an additional $300-plus billion in China imports including footwear, toys and apparel. It’s unclear when. He recently removed India and Turkey from the Generalized System of Preferences program, which allows certain items to be imported duty-free. Trump and President Xi Jinping of China are expected to renew trade talks in Japan later this week.

The National Retail Federation estimates that China supplies 42 percent of all apparel, 73 percent of household appliances and 88 percent of toys sold in the U.S.

“It’s not a crisis,” said Robert Wallstrom, president and ceo of the mid-size Vera Bradley Inc. “We ended last year with 54 percent of our imports out of China. By the end of this year, it will be about 20 percent. Our number-one country of manufacturing will be Vietnam, followed by Myanmar and Cambodia.” 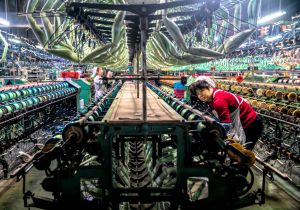 But redirecting the sourcing, Wallstrom acknowledged, represents “a big challenge…It causes hiccups in the supply chain. Logistics are longer. It probably takes an average of about 30 days or more when you are running outside of China as opposed to inside China. It’s 30 days longer in Vietnam. That’s an additional risk but it’s an additional risk you have to mitigate.

“A lot of our Chinese partners are opening factories in these other areas so they already know the product and the manufacturing and they are bringing higher-quality equipment in because they’re building new factories. We are not seeing a quality issue,” Wallstrom said.

Three years ago, Vera Bradley’s sourcing team identified the risk in China sourcing. Prices were rising and the Chinese were moving to high-tech industry and outsourcing their low-end manufacturing. “We started diversifying the factory process then,” Wallstrom said. “When tariffs arrived, it just forced us to accelerate it. It’s not like we started when the tariffs were announced. We were well on our way.”

According to Lundgren, manufacturers and retailers began leaving China at least a year ago. “Prices in China were getting higher, labor costs were rising, and Indonesia, Vietnam and Cambodia were getting more competitive. But there is only so much capacity these countries can take on,” warned Lundgren.

Retailers fear a fourth tranche of tariffs of up to 25 percent on a wide swath of products and categories out of China that weren’t included in earlier tariffs, which would ultimately force them to raise consumer prices. On inexpensive fashion basics and commodities, there’s little room for that. On higher-priced fashionable, differentiated items, there’s greater room for price change and less chance consumers balk at price hikes.

Cowen and Company estimates price increases as much as 10 to 15 percent across impacted categories. “We believe companies with strong brand equity and consumers with above-average income will be most resilient in this environment, such as LVMH and Tiffany, while apparel retailers will likely see weaker customer demand,” Cowen indicated in a research report.

According to Cowen research, major retailers have heavy exposure in China. J.C. Penney, for example, sources 30 percent of its merchandise from China, while Macy’s is at 25 percent; Kohl’s and Nordstrom at 20 percent; American Eagle Outfitters, 45 percent.

Jill Soltau, Penney’s ceo, said Penney’s has been “proactive developing contingencies for sourcing our private brands for the better part of the last several years and meaningfully diversifying our country of origin. This has allowed us to significantly reduce our exposure to China, which is already lower than industry averages.”

Macy’s ceo Jeff Gennette said Macy’s would first see if price increases could be passed on to consumers, to maintain margins. “If the customer responds poorly, we will have to mark down. In some cases, I do believe the customer will accept the higher ticket.” In other cases, Macy’s will ask manufacturers to absorb increases.

Adjusting to tariffs, “starts with what’s the anticipated behavior of the consumer,” Gennette said. “If there is a fourth tranche, it will affect a lot of the apparel and accessory categories.”

Macy’s has been moving production out of China for months, but Gennette said, “It’s still an important part of our mix.”

Retail experts say production of basic apparel, like T-shirts and underwear, are easily shifted to different countries. Expensive, stylized products like coats and accessories, are tougher to relocate from China to countries where the production is less advanced.

“Larger companies can create a secure and longer-term agreement with other countries to encourage suppliers there to build out the infrastructure needed to meet the increased demand,” Lundgren said.

Most dresses imported to the U.S. are made in India and China. The more basic the dress, the more opportunity to produce outside China. That’s true, too, of men’s polo shirts which are mass-produced in China, India, Indonesia, Vietnam and Cambodia. Many men’s woven products are also made in the Philippines and Egypt.

For women’s shoes, Mexico, Brazil and other Latin American countries are major producers. China is, too, for shoes priced under $150, while luxury footwear is widely sourced in Italy.

Assuming increased tariffs out of China, and possibly Mexico, experts expect noticeable price hikes emerging in 2020, even after suppliers and retailers have worked to mitigate costs associated with sourcing switches.

There have already been some tariff-related price hikes. At Vera Bradley, for example, there was a “low single-digit” pricing increase on comparable products to offset tariffs. “It wasn’t huge,” Wallstrom said.

As Oliver Chen, Cowen’s managing director and senior research analyst covering retail, sees it, “Sourcing changes are challenging because it takes time to find factories and negotiate contracts.” He noted the supply chain is generally six months to a year long.

“Then there are other people doing the same thing,” Chen added, creating competition for supply and potential product shortages.

With more tariffs looming, “There is a renewed sense of urgency to diversify the supplier base, but this is not coming out of left field,” said Chen, noting it’s been on the minds of most importers for some time.

“Some retailers importing about 40 percent of their products out of China are bringing it down to around 20 percent. They won’t abandon the country entirely,” said retail analyst Walter Loeb. “They’ll keep their feet in the country in case the situation reverses.”

Loeb suggested U.S. retailers could produce more jeans in Mexico, though Trump has threatened tariffs there if Mexico doesn’t stem the flow of illegal immigration to the U.S. Loeb said Eastern Europe and the Baltics, where there are little or no tariffs, could also benefit U.S. retailers.

Loeb also emphasized the challenges that come with sourcing changes. “You’ve got to get used to customs, how payments are made and how people are rewarded. You have to be able to speak their language. Supervisors may speak English but the workforce doesn’t. You have to hire local people. There is practically no way without having a resident representative to deal with all the problems.”

Meanwhile, retailers have sped up deliveries to beat deadlines on tariffs. Imports at the nation’s major retail container ports are expected to continue to grow this summer as retailers stock up inventory to get ahead of higher tariffs, according to the monthly Global Port Tracker report from the National Retail Federation and Hackett Associates.

“Handbags, shoes, opticals, sunglasses — these products can not be readily sourced in other places,” stated Karen Giberson, president and ceo of The Accessories Council, who has testified before the U.S. Trade Commission against tariffs. “China has the skilled labor force and the equipment that just doesn’t exist here anymore.”

“Even the threat of a tariff is like enacting a tariff,” said Giberson. “It forces companies to take action like it’s going to happen…If you are big company with a sourcing team with tentacles all over the world, it’s easier to identify where to go and who can make product at your quality level. I’m most worried about mid- or small-sized companies that don’t have the ability, the budget and the buying clout to figure out where to go.”

Giberson said the nicest factory she ever visited was in India, but there are also questionable ones there. “India doesn’t have a great capability to make hardware. You still have to source the hardware from another country and build that into your timeline. Certain components must come from China. We are overdependent on China. Your sourcing should look like a stock portfolio. It’s healthier to have options in a number of different places and not too many eggs in one basket.”

•  Testing for quality and design specs.

• New costs from moving raw materials to countries that do not produce the materials for the products in demand.