The format is a nod to New York City, past and present. 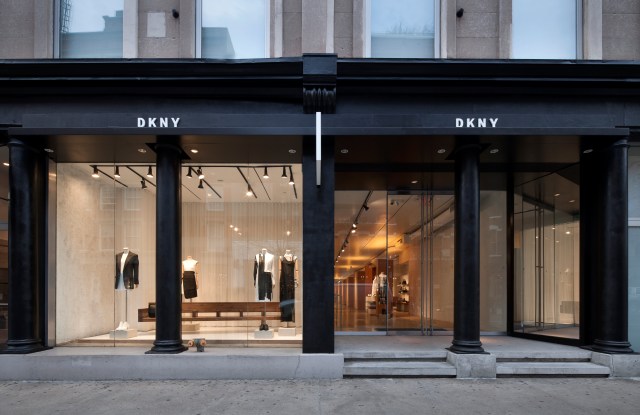 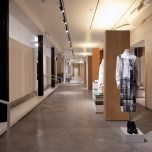 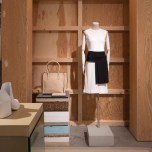 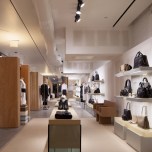 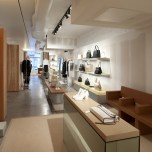 NEW YORK — DKNY has completed a remodel of its SoHo store, yet it suggests “a work in progress.”

The exposed brick walls, unfinished sheet rock and freestanding plywood wall units provide a raw contrast to the more polished elements, like the galvanized aluminum shelves with polyurethane sheet coverings, the sheer drapes, the milk-white resin floors and the femininity of the collection.

There’s a sense of discovery that the prior format lacked, with a newly created series of shops on the left side primarily for ready-to-wear and T-shirts, and a section for capsule collections that can be curtained off for a makeshift VIP fitting area. Traditional fitting rooms, with doors and 13-foot curtains, are in the rear of the store.  The store’s old format was open space with a sightline that left almost nothing hidden.

The right side of the store is essentially a long stretch of accessories and footwear with a sprinkling of ready-to-wear to project the brand’s lifestyle appeal.

For creative directors Maxwell Osborne and Dao-Yi Chow, the SoHo redesign represents the next chapter in DKNY’s evolution. But SoHo is a special case, since the interior design, revealed Monday in a tour of the store, will remain specific to that location and won’t be rolled out to other DKNY units. Architect Andreas Bozarth Fornell of Koncept Stockholm worked with the creative directors on the project.

“SoHo has and will always be a special place for us. We grew up hanging out in the neighborhood, exploring all the shops and institutions that drew a wide mix of people and cultures together,” said Osborne.

“With this store, the first of many that we’ll have a hand in designing, we wanted to create a space that was equally as cool and interesting as those of our past but also a spot that was full of new and constantly changing ideas. A place that we would’ve wanted to be around when we were younger.”

“This endeavor is exciting for us as it’s our first physical imprint on the city,” added Chow. “We have the opportunity to reappropriate DKNY’s connection with New York, and SoHo is embedded in our New York experience.”

For about two decades DKNY was painted in giant letters on the wall of 600 Houston Street. The logo marked the brand’s stake in the community and served as a symbolic welcome sign to SoHo. Seven years ago, it was replaced with equally imposing Hollister lettering when that brand moved onto Broadway.

“We first opened in SoHo in 2001 steps away from the DKNY wall that stood at the gateway to the neighborhood so it’s a place of great sentimental value for our company and our creative directors,” said Caroline Brown, chief executive officer of Donna Karan International, a division of Louis Vuitton Moët Hennessy. “With this in mind, Max and Dao Yi chose this location as the perfect one to redesign first, conceiving this concept exclusively for SoHo. It mixes the spirit of their new vision with the unique energy of this historic neighborhood.”

The store, at 420 West Broadway near Spring Street, extends a full block, providing the advantage of having entrances on both the West Broadway and Thompson Street sides.

In its constructed and deconstructed state, polished and imperfect, the store evokes a sense of the past and the present. It also suggests New York City’s grid, with its scattered spaces and different expressions. The space was formerly home to the Mary Boone and Leo Castelli galleries.

DKNY will partner with visual artists on window displays that explore the cityscape. Currently, as another nod to New York City, there is one reproduced subway bench in the window that doubles as a display fixture, and a few others inside the store that customers can sit on.