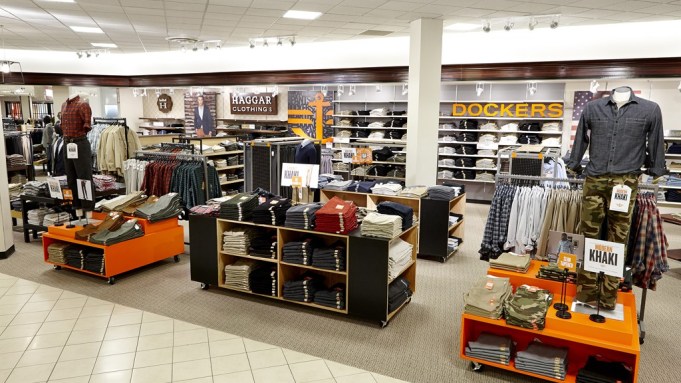 PLANO, Tex. — Dockers, Haggar and J.C. Penney Co. Inc. have joined forces to build lifestyle shops in 297 of the chain’s top doors with an eye on ramping up sales, especially of shirts and sweaters.

The adjoined Haggar and Dockers shops were codesigned by the brands and the retailer with custom fixtures to display complete looks on mannequins and posters, the better to encourage men to buy coordinating pieces instead of only pants. Installation should be complete by Friday, according to John Tighe, Penney’s senior vice president and general merchandise manager.

“Both the brands are doing quite well so their presence is growing in the store,” Tighe said. “It’ll outpace our total men’s business and we’re expecting it to really be a win for us and the manufacturers.”

An additional 225 stores are getting an updated presentation of the brands with fresh graphics.

Dockers and Haggar have about the same or slightly more space as before — an average of 1,000 square feet combined — but the shops pack in more merchandise via back-wall shelves and more efficient fixtures, Tighe noted. The retailer rarely carried Haggar shirts before and has increased its stock of Dockers’ shirts and sweaters.

“We know from the work we’ve done with Penney as well as other select wholesale customers that when we show men how to shop with a head-to-toe look it helps drive sales,” Marubio said. “We know it’s contributed in both the second and third quarter of this year….While it’s early days for these new Dockers areas, we are looking forward to seeing how it engages consumers.”

Sales have exceeded expectations at the first Haggar and Dockers lifestyle shop that opened about three weeks ago at Penney’s in Collin Creek Mall here, Tighe said. The retailer routinely installs new concepts first at this store, which is about 20 miles from headquarters, and dispatches photos of it to serve as a display guide for the chain.

“This used to be very much of a classification bottoms floor, and we injected a lot of tops into the assortment as it came together as a brand statement,” Tighe noted. “In the old days, Dockers sweaters might have been over on a sweater pad. If you were a fan of Dockers you might have had to go to multiple places in the store to find those and pull them together.”

About 30 percent of Haggar styles are exclusive to Penney’s, including plaid shirts and some tailored clothing.

“The goal is to show it to them in graphics and a mannequin and turn a sale of one or two pants into a couple pairs of pants, a shirt and a sweater,” said Rich Honiball, Haggar’s senior vice president of marketing, licensing and e-commerce. Penney’s overall men’s department is doing “OK,” Tighe said. “Compared to the rest of the store, we’re hanging in there.”

He’s working to reinvigorate the business, which suffered with the failed merchandising experiments of the past two years, by reviving St. John’s Bay this fall in shops next to the JCP brand as well as updating Stafford and JF J. Ferrar tailored clothing — all private labels.

“We’ve spent a lot of time bringing back the Stafford brand and launching new fits,” said Tighe. “We have slim fit, super slim and classic fit clothing color coded through the whole department through stitching, the donut on the hanger, tags.”

“With Millennials, we’re seeing the numbers increase pretty dramatically from a brand perspective,” Honiball said. “But we’re not saying this is for a young customer and this is for an older customer. It’s two different lifestyles. There are a lot of men over age 50 who are slim fit and want to dress more relevant or current. And there are younger customers who are more classic fit [and] want more traditional clothing.”