Girlshop founder Laura Eisman has resurfaced at AOL, where she is helping the company revamp its style coverage at Stylelist.com. 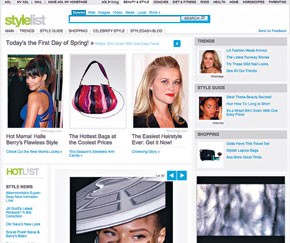 Girlshop founder Laura Eisman has resurfaced at AOL, where she is helping the company revamp its style coverage at Stylelist.com.

Girlshop, an early online pioneer known for its graphical look, cutting-edge fashions and turning a profit during the height of the dot-com bust, closed last April after a decade in business.

Since she came on at Stylelist.com as consulting editorial director last October, traffic has tripled and page views are up dramatically at the site. If comScore Media Metrix tracked the site separately, it would rank 13th in the women’s community category.

The strong growth at the site shows the strength of the online magazine format. When Eisman came on, the site was set up as a blog and her first move was to change the navigation and homepage by restyling it as a service-oriented online magazine.

“Blog formats are so linear,” she said. “Traffic wasn’t circulating properly and now it is.”

The site is meant to be an inclusive guide to style for all women. “Most women have an interest in style and fashion but run into obstacles and don’t know how to apply it to themselves,” said Eisman. “I think there is really a need for this.”

So, for example, coverage of trends, fashion weeks, beauty and hairstyles focus on how to make trends work in real life. Photo spreads show how real women of various shapes and sizes can make a particular look work for them. Readers can comment anywhere on the site and on any article.

The site is also expanding its use of experts and celebrities, tapping Joan and Melissa Rivers to comment on outfits during the Oscars, for example.

More changes are set for the summer. A complete redesign of the site is due around June, with a different template, new logo, and a new look and feel with different typefaces and colors. Eisman also plans to add more community features, including reader profiles and letting readers upload photos to show others what’s in their makeup bag or a trend they saw on the street.

She would like to create programs for advertisers with widgets and tools for them to sponsor.

Stylelist.com has only three editors in addition to Eisman, but had 1.3 million unique visitors in February, up from 325,000 the year before, according to comScore Media Metrix. Page views jumped significantly, from 1 million in February 2007 to 24 million page views last month.

ComScore Media Metrix includes the site in AOL Living, which is ranked No. 3 in the women’s community category. Glam is No. 1 and iVillage is No. 2.

The hypothetical ranking of 13th is based on the combined traffic of Stylelist and sister site Styledash, which together had 2.1 million unique visitors in February. (Styledash did not exist in February 2007.) The sites from Lifetime Television currently rank 13th with traffic of 2 million.