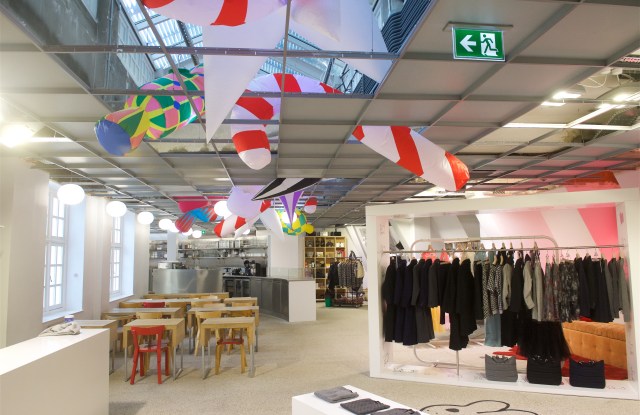 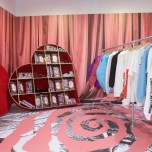 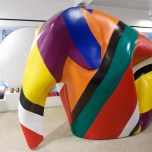 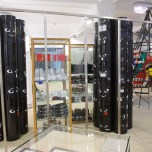 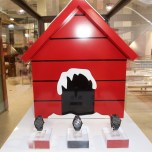 LONDON — It’s been quite a year for British giants, what with the Disney film version of Roald Dahl’s “The BFG.” Now London’s Dover Street Market is thinking big — very big — for the holiday season.

The first in-house holiday campaign at DSM’s new, supersize Haymarket venue in London, near Piccadilly Circus, features gigantic installations dreamed up by the brands and by the retailer’s in-house team.

The brick-and-mortar stalwart is adding a dash of the digital this season, with spaces dedicated to the Comme des Garçons holiday emoji campaign.

Designer Rei Kawakubo has put her personal spin on the digital faces, replacing the round yellow shapes with black hearts wearing Santa hats or birthday cakes, sitting under rainclouds or reading books.

The holiday emoji campaign will roll out to DSM units New York and Tokyo, and at IT Beijing Market on Dec. 7, and is also available at the Comme des Garçons stores.

The emojis are being sold through the Apple store and DSM is selling merchandise including bomber jackets, hoodies, bags, T-shirts, Nike Air Force 1 trainers, set of four wallets and badge sets.

Adrian Joffe, Comme des Garçons president and chief executive officer of DSM, said he was happy to have the emoji campaign in-store, admitting that DSM is “not very good on digital. We’re ‘lo-fi’ with no proper e-shops,” he said, adding that he loves the fact that “the app becomes a product.” The store’s low-tech approach, however, isn’t likely to change soon. “We like making that personal connection, and offering the service of a brick-and-mortar store.”

The emojis are only part of the DSM London’s holiday campaign, which will remain in store until the sale period begins on Dec. 27.

There’s certainly more than enough space: In March, the retailer moved from its original Dover Street digs to the former Burberry headquarters that’s triple the size, at 31,384 square feet.

So far, Haymarket has been “smashing the budgets,” Joffe said. Sales at DSM London are 178 percent ahead of last year, compared with the projected 140 percent. In the first six months, DSM London was already more than halfway to hitting its first-year revenue projection of 28 million pounds, or $35 million, according to Joffe.

Other names taking part in the supersize story include Chaos, the accessories brand cofounded by Charlotte Stockdale and Katie Lyall. They have filled their new space with a lineup of oversize black and red teddy bears covered in patches, such as crossed bits of medical tape, hearts and stars.

Balenciaga has done big bags, while Mark Cross has created giant trunks. Blue Roses, the new brand by Edward Meadham, formerly of Meadham Kirchoff, whose off-kilter shows were once a highlight of the London Fashion Week calendar, has built an oversize heart and filled it with socks, long velvet sleeves and other pieces from his new collection.

Meadham is feeling the love for DSM, which is supporting his new label. The name Blue Roses is derived from “The Glass Menagerie” by Tennessee Williams, whose work the designer loves. He said he sees himself as “half Blanche, half Stanley,” referring to the leading characters in “A Streetcar Named Desire.”

The collection includes socks, T-shirts with original prints by Meadham, glitter-coated sweatshirts as well as Elizabethan-inspired ruched velvet sleeves, cuffs, and high, lace-edged collars. It’s Meadham’s first step back into fashion following the closure of the Meadham Kirchhoff label in 2015 and he is working with Ronnie Cooke Newhouse on the project.

“It’s a very small collection of very simple things, and very democratic — distilled and accessible,” said Meadham, his bejeweled earrings twinkling as he spoke. “It’s not restricted to any type of body.”

Blue Roses will eventually be sold through the Dover Street units worldwide. “We loved his work and we missed him,” said Joffe, who said while the Blue Roses label will start small, it will not be a one-off project.

Joffe said he’s looking forward to seeing Meadham’s young fans rediscover him at London’s Dover Street, and said other new exclusives to the store include Vetements for Reebok; a DSM collaboration with Vans, and exclusive items from Gosha Rubchinskiy’s spring collection.