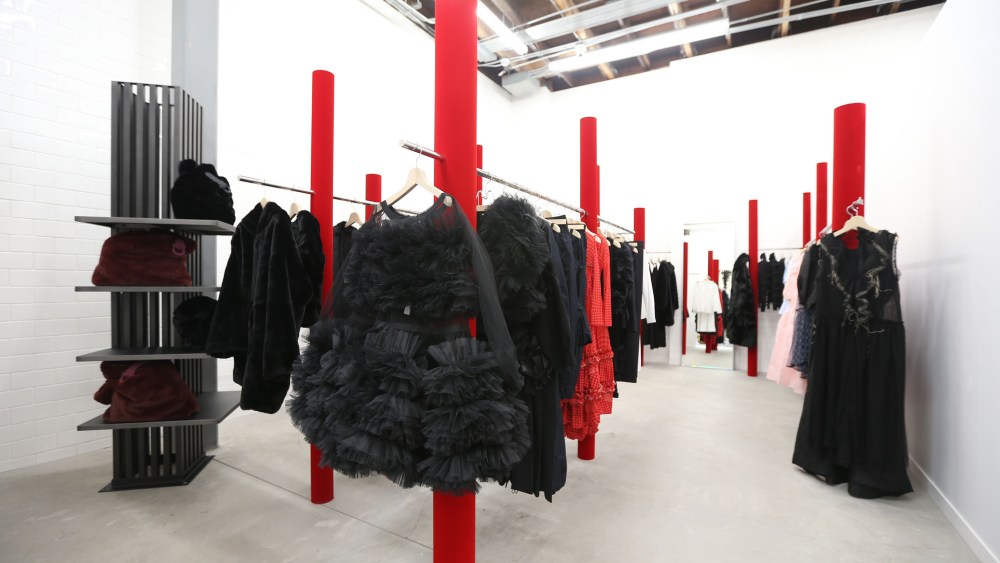 So says Adrian Joffe, president of Comme des Garçons International and chief executive officer of Dover Street Market, which is set to open its sixth location, in Los Angeles, on Saturday.

Standing amid the 15,000 square feet of “beautiful chaos” his wife Rei Kawakubo has described and designed, Joffe is both abuzz with energy and coolly zen at the same time.

The Los Angeles location at 606-608 Imperial Street, in the edgy though quickly gentrifying downtown Arts District, was one that had been on their minds for some time, although the Singapore store ended up coming together first.

He’s certainly on point. With a clutch of early adopters such as Apolis, Guerilla Atelier (now closed), Alchemy Works, Hammer and Spear, and Hennessey + Ingalls paving the way for more recent entrants 3.1 Phillip Lim, Shinola and Wittmore, plus the nearby Row DTLA complex, the Arts District is emblematic of L.A.’s retail awakening. The city has led in experiential concepts, architectural trends and technology-infused stores for years now, and the perfect storm of art, music, technology and entertainment has made it increasingly attractive to the fashion world.

Said Parisian Gaia Repossi, whose jewelry is stocked at DSM, “L.A. resources in general are immense. Design wise, their past is vibrant (Case Study houses, Charles Eames, Frank Gehry). The new art scene living with its past New Age history, with the environmental movement, vegan food and electric cars, to me, puts L.A. on the verge of a strong dynamic. And the media power of this city considering its influencers, and the tech world and apps residing here — it’s time for the fashion avant-garde to enter L.A., and DSM will set the tone.”

At DSM Los Angeles, Joffe made a point not only to debut first-in-L.A. concepts from Palace, NikeLab and Noah, but first shop-in-shops from local lines such as Brain Dead, by young designer Kyle Ng. Ng was putting the finishing touches on his installation, which included a life-size, taxidermy foam hippo inlaid with plastic crates.

“The inspiration was just to create something interesting with a sculptural element,” said Ng. “We’ve always been advanced in curation. Adrian wanted to create something more than just product, so we have a Converse [sneaker] launching here next week and we’re doing an installation and performance with NTS Radio. That’s stuff we always try to do, but Dover is such a special retailer — I wouldn’t even call it retail experience, to me it’s more of a cultural experience that is retail-based. L.A. really needs that right now. Especially in an era of the Internet and Amazon, a physical space is so important. But what is that? It’s not just seeing clothes. It’s seeing people’s perspectives. You can see brands that you wouldn’t normally or people that you didn’t know before.”

He continued, “We live in a physical world, you buy clothes which are physical, so why would you buy something online? And to express yourself online is very hard.”

Added Joffe, “Also you don’t get to interrelate and communicate.”

It’s clear he enjoys nurturing young designers. LVMH Prize winners Marine Serre and Doublet have shop-in-shops at DSM. He also tapped Rose Schlossberg, the filmmaker daughter of Caroline Kennedy Schlossberg, to help promote the new store with a series of tongue-in-cheek video dispatches that live on the web site.

“I wanted to work with someone local to help us with communications and I know her mother well from when she was ambassador in Japan. I told Caroline we were opening in L.A. and she said, ‘Oh, you’ve got to meet Rose, she makes films, she lives there.’ We just got on really well. It was a nice, different way of promoting. She’s like our correspondent. I call her my Christiane Amanpour.”

“Eli, get up off the floor and come talk to us,” said Joffe, as Linnetz was taking a break from his installation. Showing off his faded neon-green corduroy shirt, Linnetz said, “I’m from Venice Beach so the clothes are all just chill Venice clothes that people might actually wear. I’ve done other pieces with Nike and the artist Jordan Wolfson — he made all the graphics for these clothes — but we really wanted to work with local people, so all the clothes were made like, two blocks away.”

Linnetz said of his own line, “I worked at Yeezy a little, but Adrian didn’t think I could do it.” Said Joffe, “He didn’t realize that I was using reverse psychology. When he said he was going to do a collection I said, ‘No, you’re not.’ It worked. He fell for it.”

“I mean, I have so many things going on, but I did it in a month and a half,” said Linnetz, showing photos he shot on his phone of a high school swim team and Venice surfers wearing the line at the local skate park.

He then casually mentioned, “I am working with Lady Gaga designing her stage for her Vegas show ‘Enigma.’ It’s super exciting. It’s so funny because I don’t like so much of what fashion is, but then when Adrian challenged me, I was like, ‘What do I want to wear?’ Because I make a lot of Kanye’s videos which are like pop culture, it’s like, how do you translate that into fabrics and clothing?”

Kawakubo, who designs all of the Dover Street Markets, had some tricks up her sleeve for Los Angeles.

“We have never done white tile before,” said Joffe of the bright white walls of the two adjoining perpendicular buildings. “Normally we do concrete but Rei wanted tile because of California and the sunshine and bright light.” She added ample skylights to let in the natural light.

She also reinterpreted the “huts,” a signature of other Dover Streets that hold the cash wrap and dressing rooms. “This is like one giant hut,” said Joffe of the single-level space with soaring, wooden beamed ceilings, where two massive translateral huts pierce the dividing wall between the buildings and intercut it with half-walls and hallways. “These aren’t walls, they are giant huts that have been integrated into the architecture. They go through this tile wall and come out the other side, two of them. They incorporate the cash registers and the fitting rooms. It’s kind of an architectural feature-cum-iconic hut thing.”

Other hallmarks of DSM include found materials in neutral tones: corrugated iron; painted raw gypsum board, and galvanized aluminum. There’s also the juxtaposition of straight and round. “All the structures are straight and all the furniture is round,” said Joffe, pointing to the spiraling brass fixtures and red velvet cylinders holding up hanging bars.

Much of the Comme des Garçons furnishings are also new, such as a polka-dotted Plexiglass shelving unit.

“A lot of times when she designs DSM, it’s like a version of what she’s working on in Japan, and we get a new version of what’s she’s done before. But this time we are very proud and honored to get the first of its kind. She’s never done this kind of cage design,” he said of another area.

The space also features the works of six artists — Warren Muller, Lyn Dillin, Björn Dahlem, Yuichi Higashionna, Gary Card and Stuart Haygarth — whose chandeliers will be featured in the shop.

“I’m very proud of L.A. We always want the next level and something new, but somehow the timing worked out that she had the time to really do something completely new.”

And where’s the next place in the world he’d like to see a Dover Street Market?

“I wouldn’t mind seeing one in Paris one day, when we recover from this one. Nothing is planned, it has to happen naturally.”