The online specialty retailer launches its home department with some 75 products living under The Dreslyn Home tab on its site. 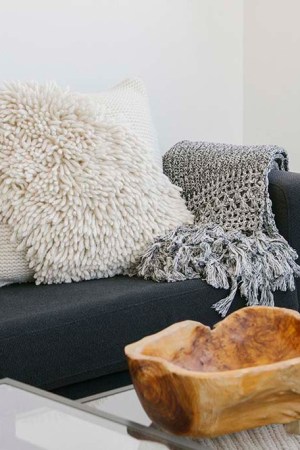 Light filters into Brooke Taylor Corcia’s office overlooking downtown Los Angeles. She’s surrounded by notecard gift sets, marble cheese boards, a Maison Martin Margiela wax candleholder and other items for the home and gifting. It’s the eve of the launch of The Dreslyn Home and Taylor Corcia’s walking a visitor through the refined collection of housewares that launched today.

The offering currently totals about 75 items but will eventually expand to include hundreds of stockkeeping units. Pricing ranges from $10 to $2,000 from as many as 15 designers.

Home makes sense for the two-year-old brand, according to Taylor Corcia, as the company has gained a steady following among fans of the downtown L.A. cool-girl aesthetic that The Dreslyn has curated.

“People on the East Coast sort of consider L.A. to be very red carpet or bohemian or very, very casual,” she said. “And I think there’s a happy medium with the women I see on the street that should be represented.”

Its given way to a buying strategy that focuses on younger labels or designers with a solid following who aren’t as commercial.

“The Dreslyn really exists to be a specialty store in the online space,” Taylor Corcia said. “We noticed that a lot of the main players, as they grow and evolved, were becoming like department store models. Home was really a natural extension of that so we have a customer who is definitely very focused and our site has a very specific aesthetic, and the woman who gets it definitely comes back.”

The home department on The Dreslyn’s site consists of both Dreslyn-branded product that ranges from an apothecary decanter set of five and marble cheese knife to a driftwood candelabra. Other items sold under the site’s home department include napkin rings from Tom Dixon, Samuji tea towels and oils and soaps from Herbivore Botanicals.

The launch follows an update two months ago of The Dreslyn Web site, which Taylor Corcia called Dreslyn 2.0. The improvements include the addition of user comments and moves to simplify the checkout process. The Dreslyn already had reduced checkout to a one-page process at the company’s launch, meaning the entire transaction takes place on a single Web page. Customers aren’t directed to a new page to enter shipping information and another for billing information and yet another just to double check the order. The company added a blog and also switched to responsive design to ensure the site was resolving well and easy to use across all platforms, including its fastest-growing channel, mobile.

“Online [business] models are really exciting and incredible because it evolves so quickly because the technology moves so fast,” Taylor Corcia said. “Really, at the base, we’re a technology company.”

The redesign was prompted when the company began noticing a surge in mobile activity and yet the conversions weren’t as high as those for desktop. Conversions have since improved and mobile’s surpassed desktop sales.

About 85 percent of the company’s sales are domestic and it’s also gaining traction in places such as Australia, southeast Asia and Canada.

The family-owned business — the other two founders are Taylor Corcia’s husband Daniel Corcia and brother Brandon Taylor — was started out of the culmination of a number of Taylor Corcia’s professional experiences ranging from her start in advertising at Glamour magazine to her transition to Montreal-based e-tailer Ssense. It was at Ssense that she cut her teeth at buying and launched the women’s department.

Taylor Corcia eventually decided to branch out on her own, saying she “had a different vision to express” in the way of retail, and she searched throughout the L.A. area for The Dreslyn’s headquarters before settling in downtown L.A.

The company, which has about 12 employees in its 5,000-square-foot office and warehouse space, is about a year and a half away from a men’s launch and is also considering children’s.

She declined to disclose revenue but said the company’s “running ahead of projections at the moment” and is not looking to raise institutional capital at least for a few more years.

As for whether they’ll go the way of many e-commerce brands and eventually open a brick-and-mortar space, Taylor Corcia gives a firm “no.”

“We originally launched with just the name The Dreslyn and it sounded like a destination, but I really feel strongly that the online model is the future,” she said. “The fact that it’s global, the fact that we’re open 24 hours, is really a strength that doesn’t necessarily carry over to brick-and-mortar. It’s a different business model completely that has a whole other set of challenges.”