The designer chatted about her health, her brand and her favorite presidential candidate — Hillary Rodham Clinton. 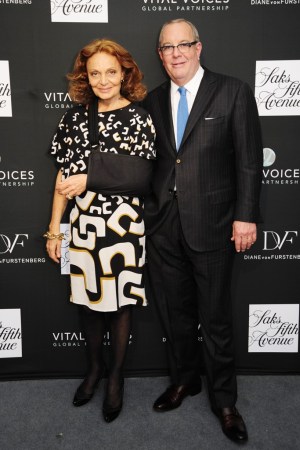 As 250 women headed into an 80-foot tent on Saks’ huge parking lot for a DVF fashion show, von Furstenberg chatted about her hopes for Clinton in 2016. Whatever problems Clinton may have had in 2008 are behind her, said von Furstenberg, especially from women who believed Clinton should have left her husband for cheating on her.

Broken shoulder notwithstanding, von Furstenberg pauses and clicks the fingers of her good arm to capture the oomph she sees in Hillary Clinton. So what does the click mean? “This big public humiliation just made her stronger,” said the designer.

Grateful to First Lady Michelle Obama for wearing her clothes, von Furstenberg isn’t sure if Clinton ever has. “Very few people haven’t worn a wrap dress at some point,’’ said von Furstenberg, postulating Hillary Clinton must have worn one when she was young.

Campaigning hard for her label and the causes she supports, von Furstenberg admitted her skiing accident at the end of March has taken a little toll. “I broke my shoulder. Then I went to Los Angeles and I rested a little bit. Then I came straight to the Kennedy Center [to introduce Clinton to 2,500 supporters at the 2013 Vital Voices Global Leadership Awards].

“It was her first public appearance [since stepping down as Secretary of State] so how could I not be there? It was such an honor. I was supposed to have had surgery,” said von Furstenberg.

From there it was back to New York for the Women of the World Conference and the DVF Swards. “I had to do interviews, and I can’t comb my hair. It was pretty hard. Then, Saturday morning I was supposed to have surgery, but I decided not to do it. It was not obligatory. I hope I did the right thing.’’

One big boost on the DVF campaign trail, she said, is her husband Barry Diller’s plane. “It’s not that democratic,” she said. “But it certainly is helpful when you’re in pain.”