DVF Opens in the City She Calls Home 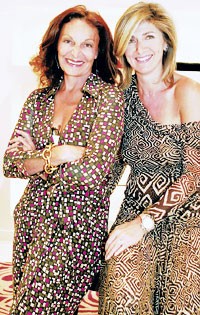 PARIS — “Where are the leopard-print dresses? We should put them there.”

Diane von Furstenberg swept into her new Paris flagship boutique last week and directed the finishing touches: reconfiguring the stools at the espresso bar, suggesting high-back chairs for the makeup counter, evaluating the arrangement of sweaters bearing her likeness — folded by staff so the eyes appear on the top shelf, lips on those below.

Even Madonna, in Paris for two concerts, paid a visit with her daughter, Lourdes, on Friday to the 1,600-square-foot shop at 14 Rue D’Alger, tucked behind Helmut Lang and just off fashion strip Saint-Honoré. The singer was clearly there to shop — she bought a vintage dress and two tops.

“I have wanted a shop in Paris for so long,” von Furstenberg confessed over lunch at a nearby sushi restaurant. “This is my home also.”

Indeed, von Furstenberg said she had her “very first fashion experience” in Paris as a child, folding sweaters in the then-famous shop Jotyl, run by her beloved aunt, Mathilde, who passed away this summer at the age of 90. The designer said she couldn’t help but feel like a torch had been passed.

To be sure, the Paris boutique is a bold statement, with a series of bright, spacious rooms spread over two floors showcasing her sportswear, beauty products and even carpets by The Rug Co. bearing famous DVF prints.

Like units in New York, London and Miami, the store has a jewel-box feel, with mirrored discs peppering the ceiling and fuchsia furniture punctuating a neutral decor.

Von Furstenberg — whose husband, Barry Diller, was in Paris last week working with François Catroux on the interior for his new yacht — allowed her store is also “a bit like a boat” with its chrome deck railing, Art Deco accents and gleaming white surfaces.

Personal touches include a collage of snapshots of her nearest and dearest, plus an Andy Warhol portrait of the designer that once hung in the bathroom of the home of her former husband, Egon von Furstenberg, who died in June.

The Paris store is a 50/50 partnership between the designer and Catherine Madar, who has worked as a designer for Sonia Rykiel and Nino Cerruti. The two met through Madar’s husband, Jean Madar, chairman and chief executive officer of Inter Parfums, DVF’s beauty licensee.

A statuesque blonde with far-flung fashion connections, Madar said the DVF collection should enjoy broad appeal in France, due not only to “easy to wear and flattering silhouettes” but also sharp pricing.

The store is expected to generate first-year sales of about $2 million.

At present, von Furstenberg’s products are sold in some 15 French doors, including the Printemps and Bon Marché department stores.

“The business is somewhat underdeveloped in Paris,” allowed DVF president Paula Sutter. “But we feel this shop in Paris will give great exposure and help develop our core customers overseas.”

While categorized as a contemporary label in American, von Furstenberg’s collection tends to hang in Europe with so-called “emerging labels” like Roland Mouret, Stella McCartney and Alice Temperley — even if it’s priced about 25 percent less.

Von Furstenberg said a shop in Los Angeles and one in either Hong Kong or Singapore is a likely next step.

Although rushing back to New York to prepare for her spring 2005 fashion show Sept. 12, von Furstenberg was relishing a few days in Paris, where she enjoys shopping for books and Christian Louboutin shoes, visiting museums and spending quality time with her many friends.

Many of them turned up Thursday night at the Hotel Crillon — Lauren Bacall, Loulou de la Falaise, Sofia Coppola and Alber Elbaz — at a dinner in her honor given by Jonathan Newhouse, chairman of Condé Nast Publications International (which, like WWD, is a unit of Advance Publications), and Carine Roitfeld, editor in chief of French Vogue.

“New York is work, the country is for family,” von Furstenberg said, beaming a big smile, “but Paris is for me.”