Thanks to Amazon, Data Points to Return of the ‘Retail Vortex’

Retailers often see holiday merchandise returns as a scourge eating away at profits.

If the retail data is correct, last year’s pattern of depressed margins following the post-holiday season is set to make a comeback. Known as the “Retail Vortex,” the phenomenon’s genesis starts in July at the kickoff of Amazon Prime Day.

According to DynamicAction’s “Retail Index: Early Fall 2019” report, “The ‘Retail Vortex’ is a strengthening yearly pattern identified by the DynamicAction Data Science team, which occurs between Christmas Day and mid-January,” authors of the report noted. “The post-holiday consumer phenomenon is facilitated by increased costs, soaring returns and inventory concerns in Q1. The trend impacts important seasonal profits and creates logistical issues, such as stock misallocation after the busy holiday period, yet it is often overlooked when planning Q4 strategies.”

According to Statista, Amazon Prime Day generated more than $7.1 billion in sales this year with consumers buying 175 million products.

Squire said for other retailers and brands, the sales event “seemingly sets into motion the key elements feeding into the perfect storm of profit depression that is the Retail Vortex.” The ceo said the “knock-on effect of Prime Day, combined with the confluence of increased marketing spend per order over the festive period, prolific discounting and post-holiday returns” has a detrimental impact on a retailer’s profit margins.

“Retailers are trying to navigate the perfect storm of shifting consumer behavior, intense competition along with the rising cost of retailing,” Squire explained. “With Amazon conditioning consumers to purchase ‘single items at will’ based on immediate need and encouraged by a lower threshold for discounted and expedited shipping, it leaves digital margins eerily thinner each year.” 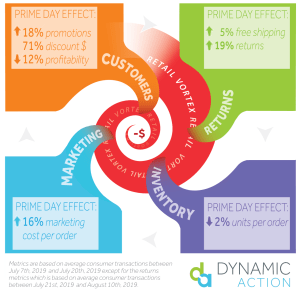 In its report, DynamicAction crunched the numbers on $11.6 billion worth of online global consumer transactions between Jan. 1 and Sept. 7. Some of the key takeaways include the orders using promotions increased 18 percent year-over-year while average discount off of full-priced items skyrocketed 71 percent.

But the report had some bright spots. “Looking at the year-to-date, the analysis uncovered positive trends for North American retailers, who have seemingly addressed many margin eroding factors as the vital holiday season approaches,” authors of the report said. “Although holding more inventory in 2019 [20 percent boost in inventory value year-to-date], retailers are making the right stocking decisions, with both inventory ‘not sold’ and inventory ‘not viewed’ down an average of 20 percent each.”