The Italian food court, operated in partnership with the Galeries Lafayette, opens in the Marais on Friday.

The meat and cheese counter at Eataly Paris Marais

PARIS — What if, instead of buying a freshly baked baguette, the Parisienne opted for a focaccia?

Italian food mecca Eataly is finally opening its doors to hungry Parisians on Friday in the trendy Marais district, four years after being revealed by Galeries Lafayette. The French department store is the food court’s partner for this first opening in France, operating a franchise.

Located in the lower part of the Marais, just behind historic department store BHV Marais, the Italian food emporium has taken over a 27,000-square-foot space on the Rue Sainte-Croix de la Bretonnerie, in a monumental building owned by Galeries Lafayette that used to house the BHV staff canteen.

“Eataly Paris Marais employs over 300 people, 50 percent of them French, 50 percent Italian,” continued Farinetti, who opened the first Eataly in Torino in 2007 and counts 39 stores in 13 countries, including locations in New York’s Flatiron building, Los Angeles, Chicago and Las Vegas. “I am very happy about the fraternity between these two Latin cultures. Italian cuisine comes from the heart: opening in Paris is like a declaration of love addressed to France.”

Sprawling over two floors, in addition to a wine cellar and an osteria located below ground level, Eataly Paris will be open seven days a week year-round and have more than 400 seats.

On the ground floor, the grocery store, meat, cheese and bread counters will be open to the public from 8 a.m. till 9 p.m. Located on the central piazza, a mozzarella bar operated by Nanina, a famed mozzarella counter based in the 11th arrondissement, will make fresh cheese using milk from the Auvergne region.

On the upper level will be stationed a pizza restaurant, a pasta counter and a cookery school for adults and children. Across the central courtyard, past the fresh fruit and vegetable stalls, visitors will be able to access two additional spaces: the espresso bar and its adjoining gelateria, as well as aperitivo spot Torino, open until 2 a.m. on Thursday, Friday and Saturday. 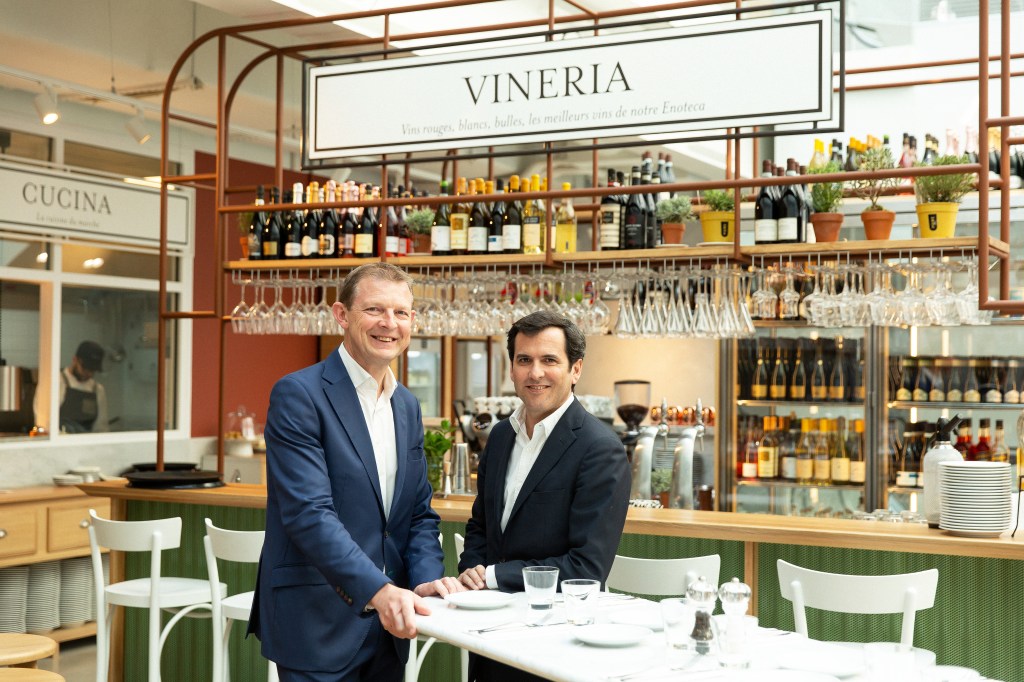 The food mecca is expected to welcome more than one million customers a year. Houzé remained vague about projected revenue, saying he expects “several tens of millions euros” and adding the Galeries Lafayette group aims to have a return on investment in three years’ time.

A mere couple of weeks after the extravagant inauguration of the department store’s flagship on the Champs Elysées, this opening is part of a global plan to boost the area around the BHV, making it more attractive to tourists and locals.

“Our aim was to create a whole ecosystem, allowing us to bring new clients to this part of the Marais, where we have a historical presence via the BHV,” said Houzé, noting that the Eataly building is located between the department store and Lafayette Anticipations, the group’s recently opened foundation. The Galeries Lafayette group is present on four key blocks in the Marais, spanning the Rue de Rivoli to the Rue des Archives.

No additional Eataly venues are in the works for the group, although Houzé admitted they have already been approached to open other stores. “We’re focusing on trying the concept out and gauging the public’s interest, but will examine all further possibilities together with the Eataly team.”