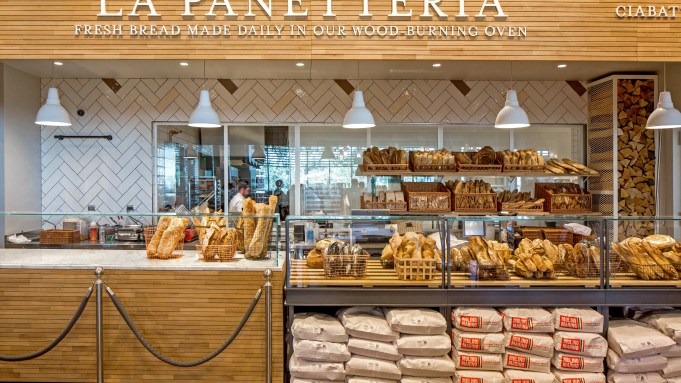 The amusement park of the food world makes its way to the West Coast Nov. 3, with the opening date now set for Eataly at Westfield Century City.

The much talked-about attraction — an Italian market mixed with restaurants, food stalls and a cooking school — turned 10 this year. Less than two weeks after opening its first West Coast outpost at Century City, Eataly will cut the ribbon on its 1-million-square-foot FICO Eataly World.

“Eataly is not a chain. I respect the chain, but I don’t like [the concept],” founder Oscar Farinetti said just before a sneak peek tour of the facility Friday, led by chef and one of the concept’s partners Mario Batali.

The two-level, 60,000-square-foot space includes a cooking classroom, Lavazza Café, gelato, cannoli and Italian doughnuts on the first floor. The first level also boasts a gray water system in keeping with Eataly Los Angeles’ theme of water. Each location is designed with a particular theme in mind, including doubt for the flagship in New York’s Flatiron district, Ernest Hemingway in Chicago and the confluence of culture and the sea in Boston.

Upstairs at Eataly L.A. is where visitors will be able to buy fresh meat, mozzarella, fish or pantry items, while also tasting prepared foods from various stalls ranging from pizza to flatbreads.

“It’ll be crowded in here. Don’t let that dissuade you,” Batali told the group touring the facility, referencing the large swaths of people Eataly tends to attract once open. “It’ll be a joyous experience in a crowded way.”

Eataly Los Angeles is part of Westfield Century City’s $1 billion shopping center redo, which has seen newer concepts such as Amazon Books and Bonobos open at the mall in addition to the relocation of Nordstrom from the Westside Pavilion.

“We think it is [a] good location for us,” Farinetti told WWD of Westfield Century City. “It’s in [a] good position for all the city. Los Angeles is a different city for us because no one is walking. No people walking; all go with the car.”

The Los Angeles debut will be followed by next year’s opening within a Las Vegas hotel and then Toronto. Outside of North America, Eataly is expected to open locations in Stockholm in February and Paris in October.

“But the best of the best will be FICO Eataly World in Bologna,” Farinetti said. “It’s the biggest store in the world.”

Eataly World, Farinetti’s most ambitious concept yet, steps up the idea of Eataly to include agriculture, animals and factories. The sheer scale of the project — which Farinetti said was developed in a four-year span of time from concept to realization — has gleaned plenty of attention, with the opening set for Nov. 15.

“It’s the Disney World of food,” Farinetti said, “and it will be dedicated to the tourists that come in Italy to understand all the world of food from the land to the table.”