The e-commerce and payment giant is cozying up to designer brands — and trying to shed once and for all the lingering perception that it’s just an auction site. 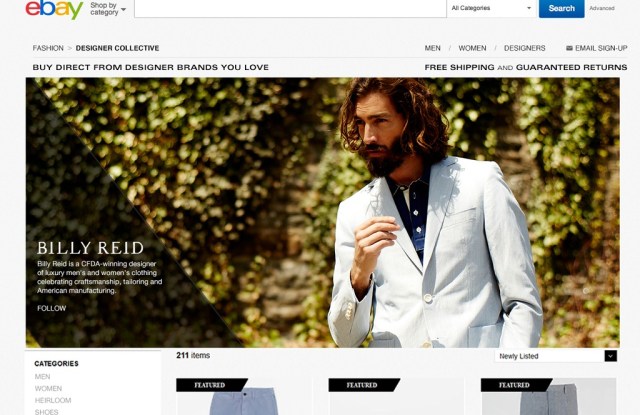 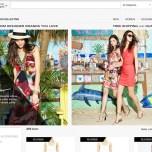 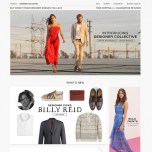 EBay Inc. is cozying up to designer brands — and trying to shed once and for all the lingering perception that it’s just an auction site.

The e-commerce and payment giant will today unveil Designer Collective at ebay.com/designercollective, a current-season, full-price shopping destination with 16 American-based brands, including Calvin Klein, Nicole Miller and Elie Tahari. EBay worked with the brands to build storefronts within the Designer Collective portion of its main Web site.

“[Designer Collective] fits with our philosophy — as partner and an enabler of brands, and not a competitor,” Devin Wenig, president of eBay Marketplaces told WWD. “We’re transaction-based. We only succeed if our partners succeed.”

For some, the full-price approach might seem like a departure for eBay, which mushroomed into a multibillion dollar company by selling everything from autos to fashion to porcelain figures via its marketplace of auction sellers.

Those days are long behind it, however. Brands now use eBay as an extension of their own e-commerce businesses and make use of the tech giant’s vast infrastructure. More than 70 percent of what’s available to eBay’s 145 million customers is new inventory sold at a fixed price. Wenig predicted that eBay will enable sales of more than $90 billion this year, with fashion constituting a meaningful portion of that amount. He declined to reveal what percentage of the company’s overall business is in fashion, or what percentage Designer Collective might comprise — but he said teaming with leading brands and allowing them to manage their presence on the platform was “the next step for us in our fashion category.”

The designers and brands will have control over their storefronts on the portal. EBay does not own any inventory. Wenig said the attraction for the brands is that the collective will extend their online presence to an additional group of consumers already predisposed to shopping for fashion.

“This is not just for emerging designers,” Marcelle Parrish, eBay’s head of fashion, explained, citing access to emerging markets such as Russia and Brazil as a key reason for larger brands to join Designer Collective. Upon launch, the collective will only ship domestically, but international shipping will roll out later this year.

Also to come later this year are Designer Collective destination shops for non-U.S.-based designers, seasonal style stories and content from influencers and bloggers.

“The larger brands see this as an extension of their digital footprint,” Parrish said. “[We’ll be] leveraging data from the marketplace to segment and target messages to the right consumers. We can more effectively target these brands to the customers that have the greatest affinity for them.”

While it might seem like an odd time to launch an in-season shopping destination — during the late-spring sale season instead of during the height of full-price selling for spring or fall — Parrish called this a quiet launch. EBay will pilot Designer Collective for the next three months, and continue to add brands and designers leading up to a larger launch in September.

EBay is taking a different approach to the category than online competitor Amazon, which introduced Derek Lam’s contemporary 10 Crosby line on Amazon.com in March 2013. Amazon both owned the inventory and ran the store — and was very clear that the destination was not a freestanding monobrand store for Lam.

“It’s a model for how we want to partner with brands going forward,” Cathy Beaudoin, president of Amazon Fashion said at the time. On eBay’s Designer Collective, Parrish noted: “The brands control their inventory — this is their store. The second piece is that the look and feel is much more aspirational. This is something some of our competition has struggled with.”

In 2010, it teamed with Derek Lam to create a crowdsourced collection, followed by a collaboration with Rebecca Minkoff on tech accessories in 2011. The next year saw the release of holiday collections with Billy Reid, Chris Benz, Steven Alan, Tibi, Ruffian, Fallon and Jonathan Adler. Last year, Mara Hoffman, Michael Bastian, Milly by Michelle Smith, Rachel Zoe and Shipley & Halmos each developed a wearable tech bracelet with eBay.

In 2012, eBay launched Fashion Gallery in the U.K. Originally called The Outlet, it sold merchandise from retailers, not direct from designers. The emphasis was on clearance merchandise with some full-price. Designer Collective launching in the U.S. is an enhanced experience featuring the full assortment of the designer brands’ offering and is in sync with the normal retail cycle.

Bud Konheim, chief executive officer of Nicole Miller, said of Designer Collective: “I’ll put as much as money behind the eBay thing as we see results. I don’t have a plan for three or five years. It’s a three-minute plan. We continue what does well and eliminate what doesn’t. We feed the beast if it’s eating.”

The ceo said e-commerce on Nicole Miller’s Web site accounted for 5 percent to 6 percent of the company’s overall direct retail business in 2013 — and projected the Web site’s take could grow to at least 10 percent this year.

Andrea Marron, vice president of digital at Nicole Miller, added that upon learning the amount of people searching for “Nicole Miller” on eBay per month (it was in the thousands) she could see no downside to partnering with the marketplace on a branded experience that exists on eBay. She realized that users were seeing other sellers’ products, but the brand had no official presence on eBay.

“Any time there is somebody out there in the world that is interested in Nicole Miller, we want to be exposed to them,” Marron said. “[And here], there are a lot of people who are already interested. That’s something we can capitalize on. We have an existing brand name that people know.”