In the past three years, the company has gone on a $5 billion spending spree, basically funded by the sale of Skype. 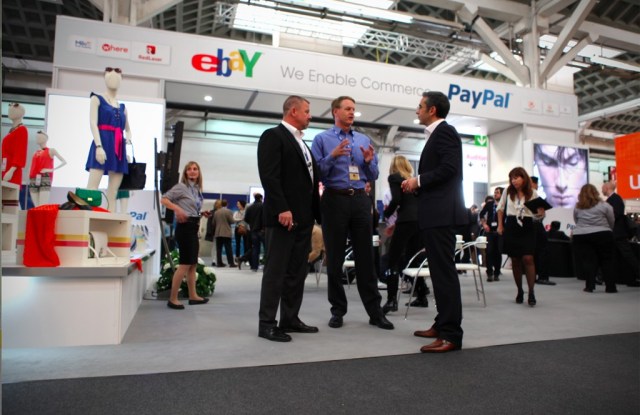 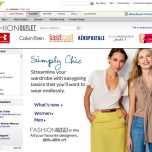 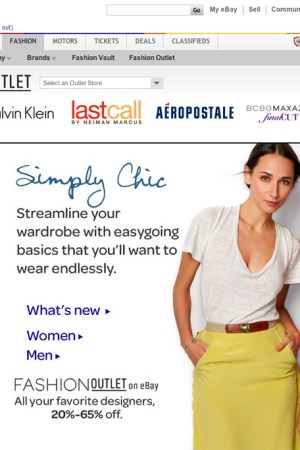 A look at the eBay Web site.

EBay Inc. president and chief executive officer John Donahoe has a message for retailers: “eBay is not a retailer.”

“We are not trying to out-retail a retailer. We have never conducted commerce. All we did was connect small sellers to consumers around the world,” Donahoe said during an exclusive interview. “We’ve always been a marketplace that never owned assets, never owned inventory.”

Therefore, Donahoe continued, giving his sales pitch: “eBay can be a credible partner to retailers.”

In the past three years, eBay has gone on a $5 billion spending spree of technology acquisitions, basically funded by the $4.2 billion raised from the sale of Skype, which was deemed a noncore business.

The most recent purchase was Hunch, which provides shopping recommendations based on shopping data, like a tie to go with a shirt. Earlier, eBay bought Zong, a provider of mobile payments; Magento software for creating e-commerce systems, which is integrated into eBay’s X.Commerce open platform (conceived by Donahoe) with technology developers creating applications for merchants; Where software for local discounts and coupons, and GSI, the e-commerce fulfillment and marketing service. GSI was bought for $2.7 billion, and its clients include Adidas, Calvin Klein, Betsey Johnson, Tumi and Kenneth Cole.

Other acquisitions were Milo, a local shopping engine; Critical Path, a mobile app developer that brought additional tech talent to eBay, and Red Laser, which enables smartphones to scan bar codes for product research and alternative places to shop the same items.

The deals have mostly been without fanfare or general awareness of the underlying strategy. “EBay Inc.-enabled commerce is the way we describe our business,” said Donahoe, who took the company’s reins in March 2008, turned the business around after some softness and set the new vision. “It’s taking time for people to understand it. I sit down increasingly with retail ceo’s, and the truth is, a lot of the strategy came from really listening to leading retail executives describe their needs and concerns. They were saying, ‘I need to go multichannel. I need to go global. I need technology to develop the online channel and drive foot traffic to stores.’ ”

Judging by the numbers, Donahoe’s strategy appears to be working. On Wednesday, the company reported that its first-quarter net income rose 17 percent to $725 million from $619 million in the year-ago period, and that revenues in the three months ended March 31 rose 29 percent to $3.3 billion, from $2.5 billion. Strong performances were cited at the Marketplaces, which generated $1.7 billion of the total revenues, as well as at the PayPal and GSI units.

“This is a great company to watch. It’s very nimble, and they haven’t yet fully leveraged GSI, Magento or PayPal. It’s very early days,” observed Rob Willms, president and ceo of the Optaros digital e-commerce company.

“EBay has struggled on a relative basis to Amazon but is still a very powerful company and brand that’s been building an ecosystem around multichannel commerce,” Willms added. “EBay has huge insight into consumers and can connect brands and retailers to targeted audiences. Hypothetically, if you were General Motors, you could leverage eBay’s capabilities and get information on who is searching for a car, more specifically for a Cadillac. This is a very powerful asset, and eBay leverages its technology investments across a very big audience.”

William Susman, founder of the boutique advisory and research firm Threadstone Partners, echoed the issue. “EBay has created a dynamic whereby they assist retailers and don’t compete with them. They’re like Switzerland — neutral. But they can pull a switch,” in the future. “All this tremendous knowledge and capability makes them smarter retailers down the road,” said Susman.

Donahoe stressed that retail is not in the game plan, only retail technology. “We had a key strategic inflection point about 16 months ago, when we stepped back and began listening to what a lot of retailers were telling us — that technology was increasingly impacting retail in significant ways and that they were not technology companies,” Donahoe said. “Because we would never compete with them, we knew we were able to help them to compete in this new multichannel shopping world, and that we had a lot of capabilities that could be useful. With most of the acquisitions, we are getting [technology] capabilities that we can leverage both in our businesses and in our clients’ businesses. For example, Where delivers consumers relevant ads based on geographic targeting. We can take that capability and introduce that to all of our PayPal customers and all our GSI consumers.”

EBay has also invested heavily in mobile, and has 400 to 500 engineers developing mobile apps involving software that drives store traffic and enables consumers to comparison shop, receive coupons and have payment options, all by smart phone. “We are trying to build a technology platform with all the ingredients for retailers to succeed,” Donahoe said. “In the last 15 months, it has evolved fast.”

In one key development, PayPal, the highly profitable online payments and money transfers giant purchased by eBay in 2002, has begun offering its service to brick-and-mortar retailers. Home Depot has rolled out PayPal at point-of-sale, and up to 20 other chains will begin to do the same by the end of the year. “It’s another step in how we are trying to partner with retailers to help them drive incremental sales,” Donahoe said. “Our goal is to enable commerce by giving consumers what they want, how they want it and when they want it.”

EBay builds PayPal into existing POS and requires just “modest software enhancement,” Donahoe said. A PayPal card or a cell phone number and PIN are needed to process a payment, and the consumer data PayPal collects can be used by retailers like Home Depot to better target market. PayPal last year contributed 40 percent of eBay’s bottom line and processed $118 billion in payments, up 29 percent year over year. Of those, $4 billion were mobile. The mobile total is expected to rise to $7 billion in 2012.

Asked whether eBay will continue to buy up technology, Donahoe replied: “We think we have all the capabilities we need and that we are aware of. Having said that, we are always on the lookout for new technologies to enhance the shopping experience. Yes, we will make more acquisitions.”

EBay’s new business model wholeheartedly incorporates eBay Marketplaces, the foundation on which the company was founded that is an online auction site, originally for used or unwanted merchandise. Marketplaces has been growing with other selling formats, including off-price and flash sales, and building up its fashion component. Marketplaces, said Donahoe, “is going to be one of the winners in this new commerce environment. It’s still the largest e-commerce market at $60 billion. There are 108 million active shoppers on eBay. They increasingly want access to new inventory. Our sweet spot is a new coat, but it’s last season’s version.” With the fashion cycle shortening, retailers have to clear merchandise faster, Donahoe noted.

“Certainly, the Marketplace is experiencing very healthy growth,” said Jeff Somers, general manager of eBay Fashion in the U.S. Though eBay still has a reputation for secondhand auction goods, Somers cited efforts to enhance the image, and how technologies owned by eBay, such as Hunch, play a part. “Expect to see more and more of a personalized experience over time, whether that’s on the landing page when you arrive, the e-mails you receive, on the outlets or other parts of the site. We are trying to present content and product that matter to you.”

In addition, “We’ve been working very hard with business development to sign on new partners” to beef up the assortment, Somers said. Within the last few months, Neiman Marcus Last Call, Aéropostale, Under Armour and The Watchery got onto Marketplaces. Guess is coming soon. EBay also has “a number of conversations under way” with designers on exclusives, with some announcements expected this year.

On the editorial side, “We are making a very large investment,” Somers said. “We want to carve out a unique voice,” conveying trends that matter to customers, and carrying a consistent theme through all components of the eBay web site. EBay shoppers are spotlighted on the fashion home page, bringing their style and personal stories to light, to give “an authentic” voice to the site.

Within Marketplaces, there’s a program for top-rated sellers that’s being refined by offering discounted fees to those sellers providing the best shopping experiences, and encouraging them to enact 14-day return policies and one-day shipping.

EBay Marketplaces generates more mobile commerce than any other firm in the world — $5 billion in 2011 and $8 billion projected for 2012.