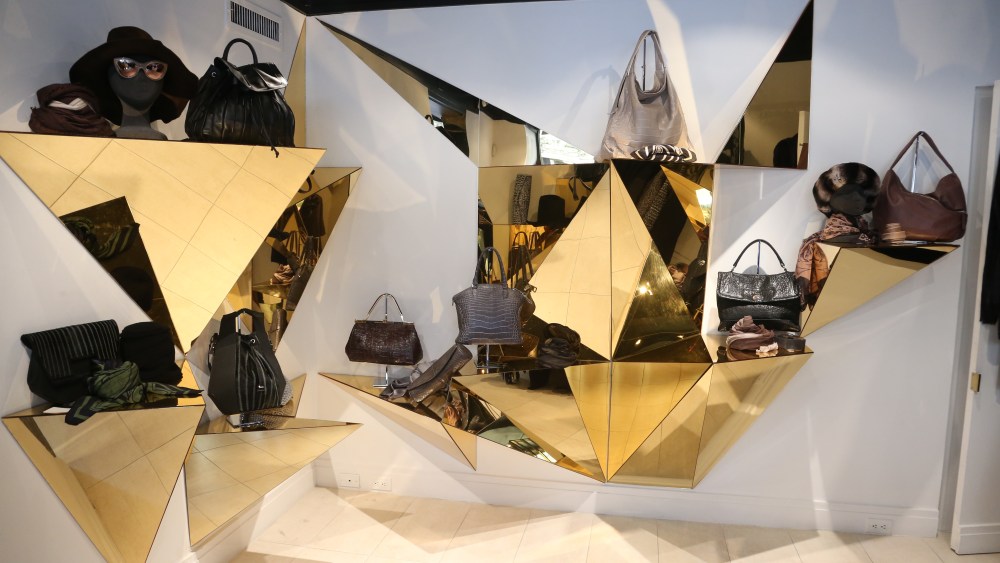 NEW YORK — “Women really like to look at themselves.”

That’s a half-serious yet fitting observation from Pat Nicholson, owner of Eclat! on madison, considering she was standing by an 11-foot-wide by 8-foot-tall Plexiglas mirror in the “runway” section in the rear of her store. It’s as much a conversation piece as a device for women to see the sway of a $3,995 Heather Wright embroidered evening gown, or a $20,000 Blancha sable coat, among the many statement pieces that shape the assortment.

The 1,200-square-foot designer store, which officially opened today on Madison between 90th and 91st Streets, is unconventional with a touch of quirkiness, from the lower case ‘m’ in the store name, to the oddly situated entrance, on the far left of the facade, creating the illusion of entering a tiny boutique. But then one realizes that to the right are two additional rooms, creating a flow and sense of depth, and segmenting the daywear from the eveningwear. The store also sells accessories, jewelry, outerwear, furs and men’s gifts.

Nothing is basic or big brand-oriented about the merchandise, which is primarily sourced from small or emerging designers from Italy and other European countries. “I am very picky on what I choose,” said Isabelle Courtial, Eclat! on madison’s chief buyer and style director. “Women come to the store and find things you would not find anywhere else. I usually search for young designers or designers that are passionate and have a story. I grew up in the south of France, in Provence, where there are a lot of  little ateliers doing handmade work. I like craftmanship.” There’s always something that’s different about the clothing, whether it’s the stitching, the cut or the material, she adds.

Among other items, the shop sells Bernard Zins travel-ready “sweat pant” trousers — a cross between a chic trouser and an exercise pant; Terre Alte cashmere silk turtlenecks in a waffle weave; Lupo Barcelona handcrafted leather handbags; Giosa Milano crocodile handbags; furs from Blancha with removable bottoms and hoods so a coat becomes a jacket and the bottom piece can be worn as a shrug or scarf; gold-plated earrings with feathers by Nathalie Regnier; sunglasses from Clan, and Antonino Valenti dresses that conform to the wearer’s shape and stays that way.

“We don’t buy a lot of pieces, maybe three or four,” Nicholson said. “We’re a store that continually has a turnover of inventory that presents new designers that you don’t see everywhere. If we find a one-of-a-kind necklace that is the best, we will feature it whether it is $450 or $20,000. We have chosen to cater to the woman who doesn’t want to see herself coming and going.”

Eclat, which means “reflection” in French, is geared to cater to women aged 30 and older who live on the Upper East Side and typically go downtown to shop at Barneys New York or Bergdorf Goodman. “The women who come here are very conservative,” Nicholson said. “We don’t get a crowd that likes low fronts or low backs. We work with some designers who will customize a look. So they might figure out a liner, or make it higher in the front or back.”

Eclat is Nicholson’s first retail venture. “I didn’t expect to own the store,” admitted Nicholson, an Upper East Sider and widow of a commercial real estate developer and owner. She was his “right-hand man” in the real estate business. After he died, she became an investor in a store that was the precursor of Eclat. It had a different name and image and a direction that didn’t sit right with Nicholson. “Her sense of high-end was not my sense of high-end,” Nicholson said. “But my strength is problem-solving. This was a problem.” So Nicholson’s solution was to buy out her partner.

“My husband left me well-off. That leaves me in a place where I can make some mistakes. The learning curve has been steep,” acknowledged Nicholson. “I know I need a store manager. I have started looking for one.”